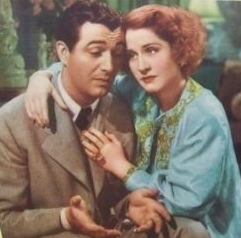 Robert Taylor and Norma Shearer in “Her Cardboard Lover,” 1942

What a delight! Robert Taylor is hired by Norma Shearer to be her Cardboard Lover to make her real love, George Sanders jealous. Taylor has been in love with Shearer but has never even spoken to her, too afraid to be rejected. When he finally speaks, he says “I love you” which makes Shearer think he is crazy. Later in the casino he loses $3000 dollars of which he has none, and he is employed by her to work off the debt. George Sanders is a cad but she is in love, and tells Taylor he is never to leave her alone, so that she can rid her mind of Sanders. Every time she tries to get to Sanders, he is there, in the hall, in the bedroom, on the balcony, eating a banana outside the door, totally insane. In one scene when Sanders comes to her bedroom to tell her they can be together if she accepts him as is, Taylor comes out of the bathroom in her pajamas with fluffy slippers and all, and hops into her bed, sending Sanders into a rage. Very, very funny indeed. They argue, he has a fist fight with Sanders, they wind up in jail, but in the end she realizes that it was Taylor all along that she loves, and all ends well. This film comes on the heels of “Johnny Eager” in which Taylor had the best of all roles as the sociopath gangster. Talk about versatility, they should never have sold this great actor short. He could play comedy or drama just as well. The teaming of Shearer and Taylor was their second, coming after “Escape” a pre-war drama about Nazi Germany. They are great together, and it is a shame that this film was Shearers last film. Review by mamalv for the IMDb.

Behind the scenes photos:

I became a Robert Taylor fan at the age of 15 when his TV show, "The Detectives" premiered. My mother wanted to watch it because she remembered Mr. Taylor from the thirties. I took one look and that was it. I spent the rest of my high school career watching Robert Taylor movies on late night TV, buying photos of him, making scrapbooks and being a typical teenager. College, marriage and career intervened. I remember being sad when Mr. Taylor died. I mailed two huge scrapbooks to Ursula Thiess. I hope she got them. Time passed, retirement, moving to Florida. Then in 2012 my husband Fred pointed that there were two Robert Taylor movies that evening on Turner Classic Movies--"Ivanhoe" and "Quentin Durward." I watched both and it happened all over again. I started this blog both for fans and for people who didn't know about Robert Taylor. As the blog passes 200,000 views I'm delighted that so many people have come by and hope it will help preserve the legacy of this fine actor and equally good man.
View all posts by giraffe44 →
This entry was posted in Films and tagged comedy, George Cukor, George Sanders, Golden Era, Her Cardboard Lover, hollywood, MGM, norma shearer, Robert Taylor, TCM, Turner Classic Movies. Bookmark the permalink.