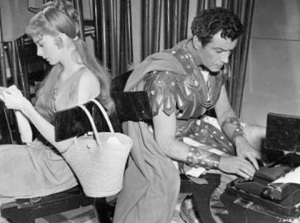 This section of the Robert Taylor blog is intended for letters by, to and about Robert Taylor.  He was a witty and colorful writer with a great sense of humor.  Mr. Taylor took his portable typewriter with him around the world on location. He was a prolific writer and his letters are a record of a long ago but still fascinating world.

If anyone has such a letter and would like to send me the text, that would be much appreciated.  I’m not asking for the physical letters nor for any legal rights to the letters or their content.  This is another way to introduce a fine actor and a terrific person to an audience that may not remember him.  It’s also for the enjoyment of those of us who remember him well.

This envelope is for sale on eBay November 2016. 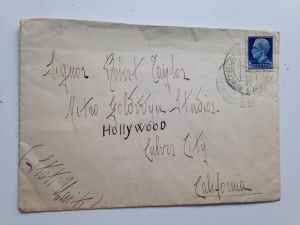 It is from Italy and addressed to Signor Robert Taylor, Metro Goldwyn Studios, Hollywod, Culver City, California.  In the lower left it says United States in Italian.  The postmark is unreadable but the stamp is for 1.25 lire and has the profile of Victor Emmanuel.  For some reason I find this fascinating.