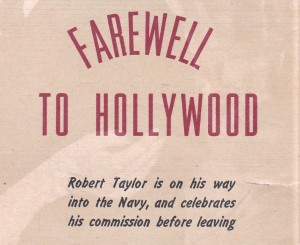 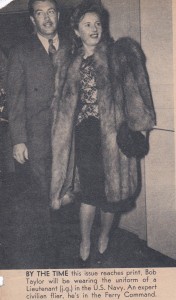 Caption R:  By the  time this reaches print, Bob Taylor will be wearing the uniform of a Lieutenant (j.g.) in the U.S. Navy.  An expert civilian flier, he’s in the Ferry Command. 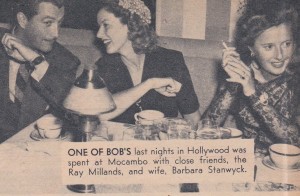 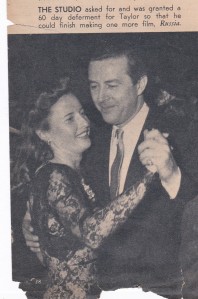 Caption R: The Studio asked for and was granted a 60 day deferment for Taylor so that he could finish making one more film, Russia. 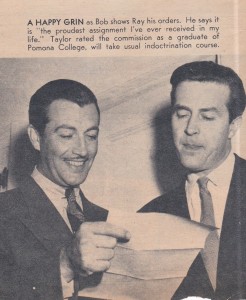 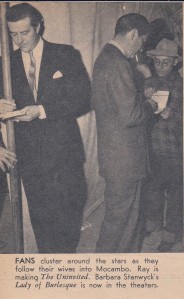 Caption L: A hapy grin as Bob shows Ray his orders.  He says it is “the proudest assignment I’ve ever received in my life.”  Taylor rated the commision as a graduate of Pomona College, will take usual indoctrination course.
Caption R: Fans cluster around the stars as they follow their wives into Mocambo.  Ray is making The Unrequited.  Barbara Stanwyck’s Lady of Burlesque is now in the theaters. 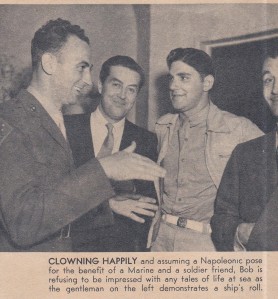 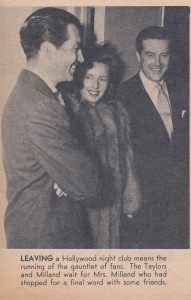 Caption L: Clowning happily and assuming a Napoleonic pose for the benefit of a Marine and a soldier friend, Bob is refusing to be impressed with any tales of life at sea as the gentleman on the left demonstrates a ship’s roll.
Caption R: Leaving a Hollywood night club means the running of the gauntlet of fans.  The Taylors and Milland wait for Mrs. Milland who stopped for a final word with some friends. 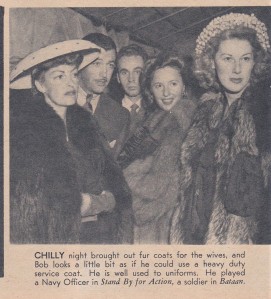 Caption: Chilly night brought out fur coats for the wives, and Bob looks  little bit as if he could use a heavy duty service coat.  He is well used to uniforms.  He  played a Navy Officer in  Stand By for Action, a soldier in  Bataan.

I became a Robert Taylor fan at the age of 15 when his TV show, "The Detectives" premiered. My mother wanted to watch it because she remembered Mr. Taylor from the thirties. I took one look and that was it. I spent the rest of my high school career watching Robert Taylor movies on late night TV, buying photos of him, making scrapbooks and being a typical teenager. College, marriage and career intervened. I remember being sad when Mr. Taylor died. I mailed two huge scrapbooks to Ursula Thiess. I hope she got them. Time passed, retirement, moving to Florida. Then in 2012 my husband Fred pointed that there were two Robert Taylor movies that evening on Turner Classic Movies--"Ivanhoe" and "Quentin Durward." I watched both and it happened all over again. I started this blog both for fans and for people who didn't know about Robert Taylor. As the blog passes 200,000 views I'm delighted that so many people have come by and hope it will help preserve the legacy of this fine actor and equally good man.
View all posts by giraffe44 →
This entry was posted in Biography and tagged Barbara Stanwyck, celebrities, Golden Era, movie stars, Navy, Ray Milland, Robert Taylor. Bookmark the permalink.

1 Response to Farewell To Hollywood