A Chat with Louella Parsons

I was very very glad to see Robert Taylor when he walked into my house to greet me on his return from Europe. Barbara Stanwyck was working so he came without his favorite girl friend. 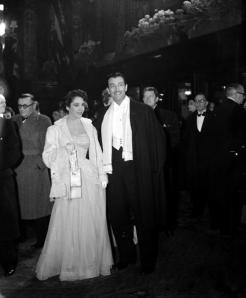 Elizabeth Taylor and Robert Taylor at a Royal Command Performance 1949

I asked Bob about meeting the King and Queen of England, and Elizabeth and Philip at the command performance. I had seen his picture with Their Majesties.

“You would have laughed,” he said, “to have seen Elizabeth Taylor rehearsing her curtsey. All day long before the presentation, she was standing in front of a mirror practicing. Didn’t you love the pictures of both of us? Barbara says she has never seen anyone look as frightened as I did and Elizabeth kept her eyes fastened on the Queen’s shoes.”

“Were you frightened?” I asked.

“Anybody who tells you he doesn’t get excited meeting a King and Queen of such popularity as King George and Queen Elizabeth, is not telling the truth. 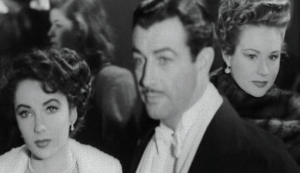 “I think one reason England has held together through all the strife and struggle is because of the love the people have for tradition and the respect and affection in which the British hold the royal family.”

“What about Elizabeth Taylor?” I asked him. Elizabeth was his leading lady in “Conspirators.”

Well, she’s awfully in love with Glenn Davis and her parents thoroughly approve. But she will wait until she is 18 to marry. She is an amazing youngster,” he continued, “she will be talking on the set just like a regular teenager. Then suddenly she will go into a dramatic scene with me and change into a grown young woman. She is an exceptional actress with great talent.”

Bob, who waited around after he got out of the Air Corps without any real good parts, is happier these days, because M-G-M has three pictures lined up, and he likes them all. “Battleground,” “The Devil’s Doorway” and “The Reformer and the Redhead,” which is first on the schedule of the three.

“After I finish ‘The Reformer and the Redhead’ with Lana Turner,” he said. “Barbara and I intend to go back to Europe. I didn’t have any time to do much but work while I was there. I did get to go to Paris for a few week ends. Isn’t Paris a wonderful city?” 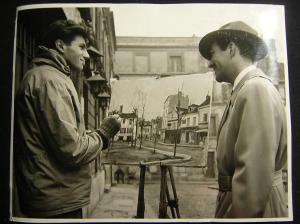 Robert Taylor appreciates a painting in Paris. The artist hopes for a sale.1948

“Did you have plenty to eat?” I asked.

“Yes, we had plenty. You see, I didn’t feel that we should take food away from the Londoners, so Barbara sent me steaks, bacon and canned foods.

“But you know, I’d see the look in the eyes of the waiter when he served steak, and I couldn’t eat it without sharing it with some of those people whose ration doesn’t give them any more than one steak a month. Even then, they can’t get meat as you know.”

Bob said he liked everything about London except the tea.

“I just couldn’t drink tea,” he said, “and when they served tea at the studio in the mornings and at 4 in the afternoon, I just had to fix myself some coffee.”

He was four months making “Conspirators” at Elstree.

“Were you homesick at all?” I asked him.

“I felt kind of sorry for myself Christmas Eve away from home,” he answered.”David Lewis, of the M.G.M. Office, and I were in Paris at the Monsignor, and when I walked in some of the violinists and the maitre d’hotel remembered me from the time I was there with Barbara.

“I was so lonely and homesick when the violins started playing ‘California Here I Come,’ and Barbara’s favorite ‘My Heart Is Like a Violin’ and ‘Anchors Aweigh,’ that I darn near broke down. Would you think I was a sissy if I told you I almost cried?”

“I would not,” I told him. “I would think that you were just what I always thought you are—a nice boy.” 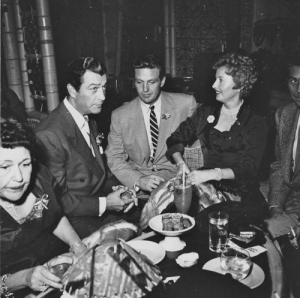 I became a Robert Taylor fan at the age of 15 when his TV show, "The Detectives" premiered. My mother wanted to watch it because she remembered Mr. Taylor from the thirties. I took one look and that was it. I spent the rest of my high school career watching Robert Taylor movies on late night TV, buying photos of him, making scrapbooks and being a typical teenager. College, marriage and career intervened. I remember being sad when Mr. Taylor died. I mailed two huge scrapbooks to Ursula Thiess. I hope she got them. Time passed, retirement, moving to Florida. Then in 2012 my husband Fred pointed that there were two Robert Taylor movies that evening on Turner Classic Movies--"Ivanhoe" and "Quentin Durward." I watched both and it happened all over again. I started this blog both for fans and for people who didn't know about Robert Taylor. As the blog passes 200,000 views I'm delighted that so many people have come by and hope it will help preserve the legacy of this fine actor and equally good man.
View all posts by giraffe44 →
This entry was posted in Biography and tagged actor, Barbara Stanwyck, celebrities, Conspirator, curtsey, Elizabeth Taylor, England, evening clothes, handsome, homesickness, King George, painting, Paris, Queen Elizabeth, rationing, Robert Taylor, royalty, steak, tea. Bookmark the permalink.

2 Responses to A Chat with Louella Parsons