This is the review of this book I wrote for Amazon. You can also get a personally autographed copy at www.authorsden.com where I got mine.

Linda J. Alexander is an author on a mission–to restore movie star Robert Taylor’s legacy. She believes, and I agree, that Taylor’s conservative activism has made him the target of a concerted left-wing effort to denigrate him and his work. His name has been physically removed from a Hollywood building, he has been left out of numerous books on the Golden Age of Hollywood and he continues to be attacked in print. The most recent example of this is Dan Callahan’s new biography of Barbara Stanwyck, which contains scurrilous attacks on Robert Taylor’s character.

In contrast, Alexander’s book is a straightforward, clearly written, well researched account of Robert Taylor’s life, both on and off the screen. She has had access to the Taylor family, his widow Ursula Thiess (who died in 2010) and his children Tessa and Terry. Alexander has read numerous Taylor letters–he was a prolific and talented letter writer–and has spoken with numerous colleagues. 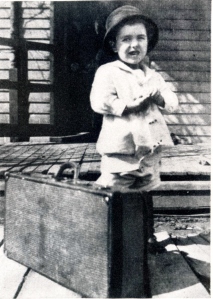 The picture Alexander creates is of a complicated man who, in a sense, maintained two identities throughout his adult life. Spangler Arlington Brugh/Robert Taylor’s roots were in rural Nebraska, where he returned frequently to steady himself and reverse the effects of Hollywood superficiality. He kept up his Nebraska friendships and subscribed to the local newspaper (by surface mail, not willing to pay for air). Keeping these ties enabled him to inhabit the role of Robert Taylor.

Taylor’s mother was an invalid and his father trained to be an osteopath in order to take care of her. They were not child oriented and Taylor had no real childhood, nor was he comfortable with children until the birth of his son and daughter, relatively late in life. As a young man he considered many professions including medicine, music, business and psychology.

Spangler Andrew Brugh (father) and Spangler Arlington Brugh (son) in 1927. Dr. Brugh was a huge influence on his son.

Acting reached out to the young Nebraskan, in the form of an MGM talent scout. Alexander has an interesting new theory on how this may have come about. He was not an instant hit with the studio, being known initially as “the Pomona mugger.” It was the public who made Robert Taylor a star. His impossibly good looks, strong masculine voice, physical grace and charm propelled him to the top, even ahead of Clark Gable on occasion.

What no one expected was that the “pretty boy” as he was derisively called (by men) was a rock solid professional who would have a career that spanned four decades. Taylor re-invented himself over and over–moving from the boudoir to athleticism and toughness, to medieval heroes, TV detectives and cowboys. As Alexander notes, he also had a goodness about him that shone through even when his characters were misbehaving.

The centerpiece of the book is, as the title would suggest, the 1947 House Un-American Activities hearings in May and October 1947. Taylor was a devoted anti-communist, a patriotic American who served his country for three years as a Navy flight instructor and a low-key political activist. Alexander convincingly refutes the “very friendly witness” myth of the man who named communist names. Taylor was happy to testify privately but never wanted to be part of the public circus of October 1947. He wrote to the committee asking to be excused but they weren’t going to pass up their star attraction. Responding to a subpoena, Taylor testified for a whole twenty-five minutes, never calling anyone a communist.

Alexander also avoids the sensationalism that mars so many Hollywood biographies. She doesn’t shy away from mentioning Taylor’s active love life but never dwells on details. Her account of the odd Taylor-Stanwyck marriage and its eventual failure is careful and convincing. She even interviewed Lia de Leo, the Italian starlet who was the excuse for the Taylors’ 1951 divorce.

Saying goodbye. Taylor and Stanwyck at the time he asked for a divorce, 1950.

Robert Taylor was a complex man who took up flying as a way to be free. In the air he wasn’t harrassed by the public, and was answerable to no studio, no director, no wife. He was a man who had no idea of his own value personally or professionally, despite his decades of success. He would always run down his own talent, giving credit to others. Alexander gives the reader a sense of Taylor’s multi-faceted personality, always professional, always decent and honorable, always reliable and cooperative. His generosity to friends like Ivy Mooring was legendary. In the sixties, as acting opportunities became scarcer, he moved seamlessly into business.

Ursula Thiess gave Robert Taylor fifteen years of personal happiness from the time of their marriage in 1954. The reader can enjoy the later years of his life on his 113 acre ranch with horses, chickens, dogs and children. He loved hunting and fishing and she gave him plenty of latitude. They were devoted to each other in every way possible.

We also see his self-destructive side. As early as the 1940’s friends tried to get Robert Taylor to cut back on or eliminate his smoking. He chain smoked from around the age of 13 and it is rare that you see a picture of Taylor without a cigarette. He finally quit a few months before his slow and painful death from cancer. It is this dark side, never taking credit for achievements, always stepping out of the way for others and refusing to take care of his health that is so hard to understand.

There is a lengthy bibliography of books, articles, interviews and Freedom of Information documents. 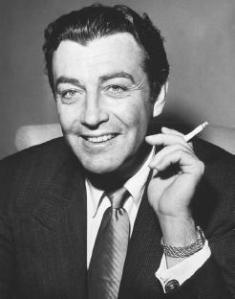 Taylor with the omnipresent and deadly cigarette.

Politics and jealousy have denied Robert Taylor the place he deserves in film history. Linda J.Alexander goes a long way towards remedying this. With the accessibility of his films on DVD, I can only hope that he will resume his rightful place. How about a lifetime Oscar, Motion Picture Academy?

I became a Robert Taylor fan at the age of 15 when his TV show, "The Detectives" premiered. My mother wanted to watch it because she remembered Mr. Taylor from the thirties. I took one look and that was it. I spent the rest of my high school career watching Robert Taylor movies on late night TV, buying photos of him, making scrapbooks and being a typical teenager. College, marriage and career intervened. I remember being sad when Mr. Taylor died. I mailed two huge scrapbooks to Ursula Thiess. I hope she got them. Time passed, retirement, moving to Florida. Then in 2012 my husband Fred pointed that there were two Robert Taylor movies that evening on Turner Classic Movies--"Ivanhoe" and "Quentin Durward." I watched both and it happened all over again. I started this blog both for fans and for people who didn't know about Robert Taylor. As the blog passes 200,000 views I'm delighted that so many people have come by and hope it will help preserve the legacy of this fine actor and equally good man.
View all posts by giraffe44 →
This entry was posted in Biography and tagged Biography, celebrities, conservative activism, entertainment, hollywood, HUAC, humility, Linda J. Alexander, lung cancer, Nebraska, Oscar, politics, pretty boy, smoking, Spangler Arlington Brugh, Stanwyck, surface mail, Ursula. Bookmark the permalink.