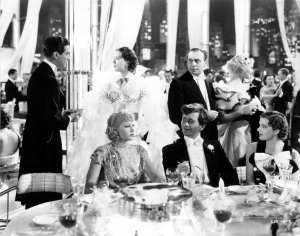 Broadway Melody of 1936 is a confection of a movie, meant to sweeten the lives of Depression weary Americans. It stars the unlikely triumvirate of Jack Benny, Eleanor Powell and Robert Taylor. The plot is flimsy, involving the parallel efforts of a columnist (Benny) trying to save his career, a Broadway producer (Taylor) trying to find a star for his new show and a dancer (Powell) trying to get her big break on Broadway.

All this is secondary to the wonderful songs by Nacio Herb Brown and Arthur Freed: “I’ve Got a Feelin’ You’re Foolin'”; “Broadway Rhythm”; “You Are My Lucky Star”; “On a Sunday Afternoon”;” Sing Before Breakfast.” The production numbers for each song range from clever to spectacular. “I’ve Got a Feelin’ You’re Foolin” is sung by Taylor and New York actress June Knight. The special effects are a delight, especially as they are done so long before CGI.

Powell proves, as always, that she is unmatched as a dancer—her energy, grace and strength are a marvel. She dances solo, with Buddy and Vilma Ebsen, with Nick Long, Jr. and with huge choruses.

Nor can the acting be faulted. Jack Benny is excellent as the gossip-obsessed wise-cracking and scheming columnist. Robert Taylor is remarkably poised and mature for his years (24) and even has a nice singing voice. The second banana roles are filled admirably by Sid Silvers and Una Merkel. If Powell and Knight are less impressive when their feet are still, it doesn’t matter—their dancing more than redeems them.

“Broadway Melody of 1936” was a high budget, high gloss, pull out all the stops, MGM production. No expense was spared for the costumes, sets, choreography or photography. The direction by Roy del Ruth is crisp and effective. We could use more films like this in our own economically challenged times. Review by me for the IMDB.

Robert Taylor and June Knight filmed a dance sequence for Broadway Melody of 1936 that did not appear in the final film.  These pictures are all that is left.

I became a Robert Taylor fan at the age of 15 when his TV show, "The Detectives" premiered. My mother wanted to watch it because she remembered Mr. Taylor from the thirties. I took one look and that was it. I spent the rest of my high school career watching Robert Taylor movies on late night TV, buying photos of him, making scrapbooks and being a typical teenager. College, marriage and career intervened. I remember being sad when Mr. Taylor died. I mailed two huge scrapbooks to Ursula Thiess. I hope she got them. Time passed, retirement, moving to Florida. Then in 2012 my husband Fred pointed that there were two Robert Taylor movies that evening on Turner Classic Movies--"Ivanhoe" and "Quentin Durward." I watched both and it happened all over again. I started this blog both for fans and for people who didn't know about Robert Taylor. As the blog passes 200,000 views I'm delighted that so many people have come by and hope it will help preserve the legacy of this fine actor and equally good man.
View all posts by giraffe44 →
This entry was posted in Films and tagged 1930s, acting, actor, Broadway Melody of 1936, broadway rhythm, Buddy Ebsen, celebrities, dancing, Eleanor Powell, entertainment, glamor, Golden Era, handsome, hollywood, Jack Benny, June Knight, matinee idol, MGM, movie stars, music, musical, nacio herb brown, Robert Taylor, roy del ruth, Sid Silvers, singing, tap dancing, TCM, Turner Classic Movies, una merkel, vilma ebsen. Bookmark the permalink.