Billy the Kid, 1941 Will Be Shown on TCM Movies on Demand Until September 8 (USA)

Billy the Kid,1941, Robert Taylor’s first western, will be playing on Turner Classic Movies on Demand until September 8.  Closed captioned. 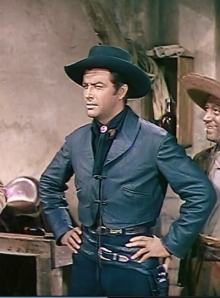 Billy the Kid (1941) is an early example of the use of Technicolor. The film is visually outstanding. Cinematographers Leonard V. Skall and Leonard Smith received an Oscar nomination for their work on the film and should have won. From close-ups to panoramic views of Monument Valley, Kanab, Utah and other locations they used color, composition and especially light masterfully. Some scenes evoke the stillness of a Vermeer and others the chiaroscuro of Rembrandt. Near the end of the movie Billy is standing near the window of a tumbledown shack. The viewer is outside and can see his body fading into the shadows except for the upper part of his face, especially the intense blue eyes. There is a Caravaggio-like spotlight on the hand and gun the outlaw is pointing out the window.

Historically, there is little resemblance between the film and the actual life of Billy the Kid. The general details of his background is correct but the names have all been changed, perhaps to head off the complaints of purists. There is no Pat Garrett, but rather a Jim Sherman (Brian Donlevy), no William Tunstall but an Eric Keating (Ian Hunter). The filmmakers obviously wanted to tell a good story without regard to historical accuracy.

Robert Taylor was 30 when Billy the Kid was filmed. He’s too old for the part but not by as much as some have made out. To seem younger, Taylor plays Billy as uncouth, uneducated and probably illiterate. The outlaw is incapable of understanding the consequences of his actions. He’s always being bombarded by new ideas and new customs. There is a lighthearted scene where Billy is handed a teacup and saucer, objects obviously new to him. He picks the cup up as though it were a glass until he sees what Keating is doing. Billy holds the cup awkwardly by the handle until Keating turns away then he gulps the tea with his original hold.

This was Robert Taylor in his element. He was a superb rider and did all of his own riding in this film, even in the long shots. Taylor also had the western swagger down pat and seems very comfortable in his cowboy costumes. In private life, he often wore jeans, boots and a Stetson. In the first and last parts of the film, Billy dresses all in black. In the middle he wears a blue shirt to indicate his changed lifestyle. Robert Taylor practiced left-handed drawing and shooting for weeks before the film and used the skill again in the film “Ride Vaquero” in 1953.

Taylor and Donlevy are comfortable with one another, having worked together before in “This Is My Affair” in 1937. The easiness of their relationship makes Billy’s (temporary) transformation into an honest cowboy believable. Mary Howard has a small role as Eric Keating’s sister and makes the most of it. Ian Hunter is believable as rancher Keating.

The villains, especially Hickey (Gene Lockhart) are suitably nasty. Henry O’Neill, a leading character actor, throws himself with gusto into the role of a newspaper publisher whose press is constantly being sabotaged. Review by me for the imdb.

I became a Robert Taylor fan at the age of 15 when his TV show, "The Detectives" premiered. My mother wanted to watch it because she remembered Mr. Taylor from the thirties. I took one look and that was it. I spent the rest of my high school career watching Robert Taylor movies on late night TV, buying photos of him, making scrapbooks and being a typical teenager. College, marriage and career intervened. I remember being sad when Mr. Taylor died. I mailed two huge scrapbooks to Ursula Thiess. I hope she got them. Time passed, retirement, moving to Florida. Then in 2012 my husband Fred pointed that there were two Robert Taylor movies that evening on Turner Classic Movies--"Ivanhoe" and "Quentin Durward." I watched both and it happened all over again. I started this blog both for fans and for people who didn't know about Robert Taylor. As the blog passes 200,000 views I'm delighted that so many people have come by and hope it will help preserve the legacy of this fine actor and equally good man.
View all posts by giraffe44 →
This entry was posted in Films and tagged 1941, acting, actor, adventure, Billy the Kid, Brian Donlevy, cattle, celebrities, cinematograpy, cowboy, drama, entertainment, Eric Keating, Gene Lockhart, glamor, Golden Era, handsome, hollywood, Ian Hunter, Leonard Smith, lighting, Mary Howard, matinee idol, MGM, movie stars, Mr. Taylor, Oscar, outlaw, rancher, riding, Robert Taylor, romance, Technicolor, Western. Bookmark the permalink.