I have no information about the analysis below. If anyone knows where it came from, please let me know and I will include the information. It’s pretty accurate although most of the substance could have come from written sources. 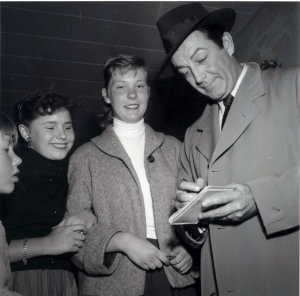 Robert Taylor’s signature, combining very large and rather small letters,shows reserve and shyness, yet great ambition and pride.  The squares in this design symbolize peace and comfort and his willingness to undergo criticism to maintain them.  Throughout this pattern is the suggestion of flight–wings and propellers. If he is 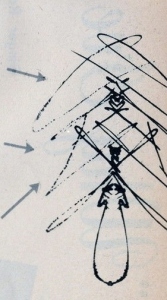 not an excellent aviator then his greatest success will come through films centered on flying.  His contribution to World War II, I understand, is to be in aeronautics and it would not surprise me, after the war, to hear of his giving up acting for flying.  For while he is a fine actor, he is not the typical actor.  Therefore, I think he will be much happier if he concentrates his later ambition on less ephemeral things than acting.  Two small hearts early in his life were important, but not dominant.  Later on, romance plays a secondary role in his interest. For our romantic-looking Bob has a depth of character unsuspected by many of his would-be critics.

The comments above about Mr. Taylor leaving acting are interesting.  The following is  an article called Lt. Robert Taylor Believes Acting Days Probably Over by Earl Wilson on January 15, 1945.

New York, Jan. 15–Barbara Stanwyck ignored me and rustled into the bathroom and took a shower so I knew at last that I was a social failure. How would Barbara Stanwyck feel if she came over to my town house, here in midtown ‘midst the aroma of delicatessen, stale beer and actors, and I didn’t even say hello to her, but bounded right to use the shower? Personally, I took it as a hint that her enthusiasm for me was less than overpowering. 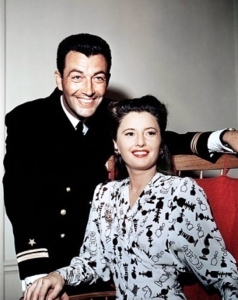 Luckily her handsome husband, Lt. Robert Taylor, talked to me. With his crew haircut and his small mustache he looked wonderfully handsome and smart. As he’s now a U.S. navy flying instructor, I inquired whether young fliers aren’t impressed at being taught by Mr. Beautiful of the movies.

“They never show that they know you from a load of coal cars,” he said.

He walked across the room, lean-hipped and erect, with that walk that makes dames silly. “When I started learning to fly,” he said, “God Almighty could have walked up in a parachute and I wouldn’t have been impressed.” Lt. Taylor pounded on the bedroom door. His wife had locked it before going into the shower. Now she was showering steadily, and the roar drowned out his pounding. “I can’t even get in my own bedroom,” he said.

I asked what two years in the service would do to his career when he goes back to acting.

“If this war lasts as long as I think it will,” he said, “I won’t go back to acting. Nobody will remember Robert Taylor.”

(He’s here in connection with “The Fighting Lady,” a navy documentary about an aircraft 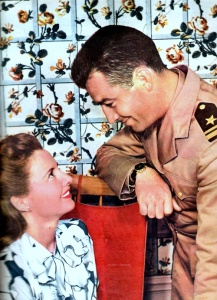 carrier, which he narrated.)

The silly dames will never forget you,” I said.

“To remain a star–and believe me if I’m not a star I’ll get out of pictures–I’ve got to be a great actor from here on out,” he said. “And I’m not a great actor and never will be. I got in pictures just because I was a good looking guy. If I thought I were a Sinatra, I wouldn’t say this. If I had that animal sex appeal of Gable or Bogart–no, after the war I could do all right as a cutter. I could reduce my standard of living a hell of a lot and probably be a lot happier. But I’m probably going to be a director some day.”

Lt. Taylor noticed my restlessness to meet Miss Stanwyck and got up and pounded on the bedroom door some. She didn’t answer. She was still showering, so I left.

I became a Robert Taylor fan at the age of 15 when his TV show, "The Detectives" premiered. My mother wanted to watch it because she remembered Mr. Taylor from the thirties. I took one look and that was it. I spent the rest of my high school career watching Robert Taylor movies on late night TV, buying photos of him, making scrapbooks and being a typical teenager. College, marriage and career intervened. I remember being sad when Mr. Taylor died. I mailed two huge scrapbooks to Ursula Thiess. I hope she got them. Time passed, retirement, moving to Florida. Then in 2012 my husband Fred pointed that there were two Robert Taylor movies that evening on Turner Classic Movies--"Ivanhoe" and "Quentin Durward." I watched both and it happened all over again. I started this blog both for fans and for people who didn't know about Robert Taylor. As the blog passes 200,000 views I'm delighted that so many people have come by and hope it will help preserve the legacy of this fine actor and equally good man.
View all posts by giraffe44 →
Gallery | This entry was posted in Biography and tagged acting, actor, autograph, Barbara Stanwyck, celebrities, Earl Wilson, entertainment, gentleman, glamor, Golden Era, handsome, handwriting, hollywood, marriage, matinee idol, MGM, movie stars, Robert Taylor, signature. Bookmark the permalink.