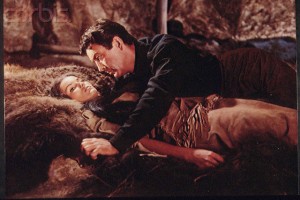 Have no illusions, this IS a morality story. Granger is the troubled ex-buffalo hunter, tempted back to the plains one more time by kill-crazed Taylor. Granger can see the end is near, and feels deeply for the cost of the hunt-on the herds, the Indians and the land itself. Taylor, on the other hand admittedly equates killing buffalo, or Indians to ‘being with a woman.’ While Granger’s role of the tortured hunter is superb, it’s Taylor who steals the show, as the demented, immoral ‘everyman’ out for the fast buck and the good times. There’s not a lot of bang-bang here, but the story moves along quickly, and we are treated to a fine character performance by Nolan. The theme of this story is just as poignant today, as in the 1800s-man’s relationship to the land and what’s on it, and racism. Considering when this was made, the Censors must have been wringing their hankies during the scenes in the ‘bawdy house’, Taylor’s relationship with the squaw, and much of the dialogue. Although downbeat, this is truly a great western picture. Review by bux for the IMDB.

I became a Robert Taylor fan at the age of 15 when his TV show, "The Detectives" premiered. My mother wanted to watch it because she remembered Mr. Taylor from the thirties. I took one look and that was it. I spent the rest of my high school career watching Robert Taylor movies on late night TV, buying photos of him, making scrapbooks and being a typical teenager. College, marriage and career intervened. I remember being sad when Mr. Taylor died. I mailed two huge scrapbooks to Ursula Thiess. I hope she got them. Time passed, retirement, moving to Florida. Then in 2012 my husband Fred pointed that there were two Robert Taylor movies that evening on Turner Classic Movies--"Ivanhoe" and "Quentin Durward." I watched both and it happened all over again. I started this blog both for fans and for people who didn't know about Robert Taylor. As the blog passes 200,000 views I'm delighted that so many people have come by and hope it will help preserve the legacy of this fine actor and equally good man.
View all posts by giraffe44 →
This entry was posted in Films and tagged acting, actor, buffalo, buffalo hunt, buffalo hunter, Debra Paget, gentleman, glamor, handsome, hollywood, imdb, Last Hunt, Lloyd Nolan, madness, movie stars, Native American Indian religion, rifles, Robert Taylor, Russ Tamblyn, TCM, The Last Hunt. Stewart Granger, Turner Classic Movies, white buffalo. Bookmark the permalink.