The following are excerpts from a letter written in the early 1950s by Robert Taylor to Eddie Mannix, MGM studio executive.  Mr. Taylor had received a reprimand from Mannix about his personal expenses connected with the filming of Ivanhoe (1952). This letter is part of the Taylor Family Collection and was quoted in Linda J. Alexander, Reluctant Witness: Robert Taylor, Hollywood and Communism, Tease Press, 2008, pages 271-272. Used by permission.

The letter is, in my opinion, one of the best insights into Mr. Taylor’s personality on record.  The actor hated confrontation and would go out of his way to avoid it.  Robert Taylor also had a strong sense of personal integrity and would never overcharge his employer. Rather

than expressing the anger he must have felt, Mr. Taylor very successfully resorts to satire. He deftly skewers  Mannix’  small-minded complaint with sardonic wit, at one point referring to MGM blockbusters, including his own Quo Vadis.   To see more context for this letter, consult  Ms. Alexander’s book.

“I realize that $5 is an exorbitant price to pay for a hotel room but I hasten to assure you that I did not take a suite. I confess to having a private bath…but this was only as a last resort after I learned that several people on my floor had dysentery…..I assure you that I shall check with the health department of each city I visit before stopping at a hotel. I quite agree that it’s expenditures such as this which can bankrupt our studio. 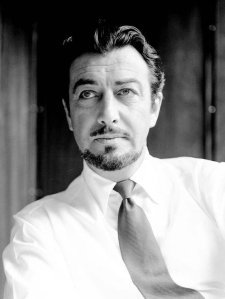 “The New York expenditures are self-explanatory. Only one item would I like to explain. Mr. Gil Cote, our very efficient special services man in New York, accompanied me to the boat and [despite] my continued protestations that Coca-Colas are very bad for the teeth, the digestion and disposition, [he] insisted on drinking two of them before the boat sailed. They appear on the statement as an item of 20 cents and I am truly embarrassed by it.

“During the crossing, aboard ship, I endeavored in every way to minimize expenses as much as possible. The following examples will, I trust, serve to authenticate this statement.

“Through the use of extreme charm, the displaying of faultless manners, and the casual reference to the fact that I was a friend of Bunny Dull,* I succeeded in persuading innumerable passengers aboard ship to buy me drinks during the evenings. Some of these included Vincent Astor, Mr. and Mrs. Willington of Dumont Television, and Mrs. and Mrs. Reid, editor of the Herald-Times.

“I avoided the rental of a deck chair, blanket and pillow by making my appearance on deck before anyone else was out of bed or after everyone else had gone to bed. Sitting on other passenger’s chairs didn’t really bother me much, especially when I knew I was saving the studio a lot of money. Moreover, by changing chairs continuously, I had a change of scenery which I couldn’t have ever gotten with my own chair.

“I completely avoided buying any wine during the entire crossing. This I accomplished by dining as late as possible and by drinking the dregs out of all the old unfinished bottles which passengers had left before me. The mixing of white wines, red wines, still wines and sparkling wines became a little nauseating at times. But again I realized that was the least I could do for a generous studio which could only look forward to an even break on such complete flops as King Solomon’s Mines, The Great Caruso, An American in Paris, Shoe Boat, Quo Vadis etc. etc.

“I endeavored to press my own clothes, but the small electric iron I carry for this purpose blew out a fuse in this section of the main deck, and the ship’s electrician recommend[ed] that I discontinue its use. I tried to clean my own room and make my own bed at the outset of the trip. However, the room steward caught me the second day out and threatened to report me to the Steward’s Union.** After weighing the possible consequences I decided that it might be cheaper for the studio to permit a tip to the steward for such services rather than to fight a case against a powerful international union. In this I hope my conclusions were correct.

“These are but a few examples of my never ending efforts to save the studio money. If I have failed I shall never forgive myself. If I have succeeded I shall, at least, rest happy in the knowledge that a lowly actor has contributed if only in a small measure to the financial well-being of his studio. Perhaps the executives of our organization can, in the future travel in even greater splendor at studio expense, and we shall emerge upon a new and brighter era for our product and will once again start making a few bucks. I would be so nice to have a deck chair again!

My very kindest regards, Mr. Mannix, to your good self and all the other members of the executive branch of our MGM family.

**MGM had been experiencing labor troubles.

I became a Robert Taylor fan at the age of 15 when his TV show, "The Detectives" premiered. My mother wanted to watch it because she remembered Mr. Taylor from the thirties. I took one look and that was it. I spent the rest of my high school career watching Robert Taylor movies on late night TV, buying photos of him, making scrapbooks and being a typical teenager. College, marriage and career intervened. I remember being sad when Mr. Taylor died. I mailed two huge scrapbooks to Ursula Thiess. I hope she got them. Time passed, retirement, moving to Florida. Then in 2012 my husband Fred pointed that there were two Robert Taylor movies that evening on Turner Classic Movies--"Ivanhoe" and "Quentin Durward." I watched both and it happened all over again. I started this blog both for fans and for people who didn't know about Robert Taylor. As the blog passes 200,000 views I'm delighted that so many people have come by and hope it will help preserve the legacy of this fine actor and equally good man.
View all posts by giraffe44 →
This entry was posted in Biography and tagged acting, actor, Bunny Dull, celebrities, Dumont Television, Eddie Mannix, entertainment, gentleman, glamor, Golden Era, handsome, Herald-Times, hollywood, Ivanhoe, King Solomon's Mines, Linda J. Alexander, matinee idol, MGM, movie stars, Mr. and Mrs. Reid, Mr. and Mrs. Willington, Quo Vadis, Robert Taylor, Taylor Family Collection, transportation, Vincent Astor. Bookmark the permalink.