Trying to write a letter with Elizabeth Taylor as a distraction on the set of “Conspirator.”

Robert Taylor enjoyed writing letters.  There are numerous pictures of him on various movie sets, typing on his portable typewriter.   His daughter Tessa remembers her father spending afternoons on his correspondence, holding her in his lap.  (Linda J. Alexander, “The Family Legacy of Robert Taylor, Film Legend…& Father,” posted 9/22/2002).  To those of you who don’t remember manual typewriters, there was no enter, no delete, no commands at all. If you made a mistake you picked up your typewriter eraser and scrubbed away, usually making a hole in the paper.  Correction fluid, or white-out, came as a great relief.

Here is a letter, undated, to  Earl M. Marvin, publisher of the Beatrice, Nebraska, Sun.

Mr. Taylor subscribed to the Sun by regular mail as he didn’t want to pay for air mail.  This letter is quoted in Jane Ellen Wayne, Robert Taylor: the Man with the Perfect Face, 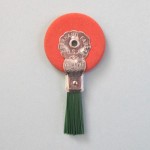 You touched upon a subject which has always been kind of a “touchy” one in my career.

At the time when my name was changed I must confess that I wasn’t in much of a position to argue with anyone. Jobs were scarce and I considered myself pretty lucky to be offered one even at the rather meager salary of $35 per week. I held out for the name of Stanhope as long as I could, but it was largely a matter of being out-voted. They had the job I needed…and they coulda called me Uncle Fud if they wanted and I’da accepted it! Nonetheless, I agree with you. Stanhope was a nice-sounding name and I wish I could have used it. At least I tried.

Mr. Taylor used a sort of “folksy” style in many of his letters, with colloquialisms and deliberate misspellings.  I think this was to avoid any kind of movie star pretentiousness. Stanhope was his mother’s maiden name and also the name of the leading character in the play Journey’s End.  By most accounts, Robert Taylor was acting in a Pomona college production of this play when he was spotted by an MGM talent scout.  After giving up on Stanhope, Mr. Taylor tried to get the name Ramsey Taylor.

The following was originally published in Motion Picture Magazine, April 1941.  It is quoted in Wayne, page 105.  Used by permission.  The recipient is Jim Reid, editor of the magazine.

Thank you for the opportunity of replying to the rumor which seems to have been circulating around recently. Unfortunately it is an opportunity which is too seldom granted people in this business. 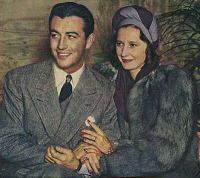 Barbara and I were married two years ago for reasons which are common, I believe, to any two people who decide to take that step, namely love, mutual interests and a pretty good understanding of each other. So far as we are concerned these elements still exist.

The rumor, though unfortunate, did not come as a surprise to either Barbara or myself. Actually we have been expecting it. It seems inevitable that when pictures people have been married over a year, rumors of this sort arise. Why, I do not know but the fact still remains…May I assure you and hope that you will assure your readers, in turn, that all such rumors are entirely unfounded and untrue.

Thanks again for Barbara and Myself…

The tone here is more serious and businesslike, as befits the subject. 1941 is the year Mr. Taylor filmed Johnny Eager with the young Lana Turner.  He was attracted to the beautiful starlet and said: “Any girl would have to go to some length to be more beautiful than Lana Turner, Ava Gardner or Liz Taylor..” Alexander, page 163.

“Bob was determined, though.  Whether he thought he was really in love, or the lust factor overtook all logical thought, Bob was

ready to leave Barbara for Lana Turner.  Believing they hadn’t slept together was difficult for gossipmongers in the face in the face of their blatant and very physical public flirting, and stories ran wild……Common belief, from those who saw them together every day, indicated that they did have a hot-and-heavy physical relationship, the sort of which to that point in his life Bob had never experienced.”

At this time Barbara Stanwyck suffered a cut wrist which she blamed on a broken window.  Skeptics saw it as self-administered to bring home to Bob Taylor how hurt she was.  MGM orchestrated a campaign to counter the bad publicity including having both Mr. Taylor and Ms. Stanwyck imprinting their hands and feet in a single block of cement at Grauman’s Chinese Theater in June, 1941.  Many years later, Ms. Stanwyck was asked to imprint a

new block since the old one was crumbling badly. To her credit, she refused because it wouldn’t include Robert Taylor.  The old block has since been restored. (See “Taylor and Stanwyck at Grauman’s Chinese Theater” on this blog.)

To add to the couple’s problems, after making Flight Command in 1940, Mr. Taylor fell in love with flying and spent almost every minute he wasn’t working in the air. Barbara Stanwyck was terrified of flying and almost never flew.

Despite all this, Robert Taylor was serious about his marriage and stayed with Barbara.

The following is undated:

I find this little note fascinating.  It could be in response to a photograph.  Mr. Taylor was critical of his photos, not liking many of them.  The last line is a reflection of his serious lack of self-confidence and what we now call self-esteem.  This psychological quirk runs through Robert Taylor’s entire career and explains a lot about him but it’s too complex to go into further here.

I became a Robert Taylor fan at the age of 15 when his TV show, "The Detectives" premiered. My mother wanted to watch it because she remembered Mr. Taylor from the thirties. I took one look and that was it. I spent the rest of my high school career watching Robert Taylor movies on late night TV, buying photos of him, making scrapbooks and being a typical teenager. College, marriage and career intervened. I remember being sad when Mr. Taylor died. I mailed two huge scrapbooks to Ursula Thiess. I hope she got them. Time passed, retirement, moving to Florida. Then in 2012 my husband Fred pointed that there were two Robert Taylor movies that evening on Turner Classic Movies--"Ivanhoe" and "Quentin Durward." I watched both and it happened all over again. I started this blog both for fans and for people who didn't know about Robert Taylor. As the blog passes 200,000 views I'm delighted that so many people have come by and hope it will help preserve the legacy of this fine actor and equally good man.
View all posts by giraffe44 →
Gallery | This entry was posted in Letters and tagged 1941, acting, actor, Barbara Stanwyck, Beatrice Sun, Bob Taylor, celebrities, Elizabeth Taylor, gentleman, glamor, Golden Era, handsome, hollywood, Jane Ellen Wayne, Johnny Eager, Lana Turner, letters, Linda J. Alexander, marriage, matinee idol, Motion Picture Magazine, movie stars, name, Ramsey Taylor, Robert Taylor, romance, Spangler Arlington Brugh, Tessa Taylor. Bookmark the permalink.