Saddle the Wind is Playing on TCM on September 19 (USA) 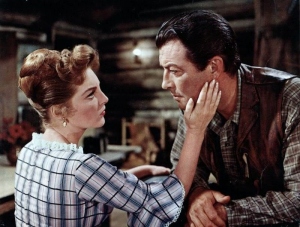 Saddle the Wind is the result of a creative conflict between golden era Hollywood and the cool method acting world of New York in the late 1950’s. Both the writer, Rod Serling (of Twilight Zone fame) and John Cassavetes represented the new, “cool” world of New York. Robert Taylor, holder of the record for the longest employment by one studio) represented Hollywood with a capital “H.” The director, Robert Parrish, was more on the New York wavelength.

From what I’ve read, Cassavetes tried to antagonize Taylor with his difficult behavior and, when he failed, got even more outrageous. The New York crew regarded Taylor as incredibly “square.”

The result of all this is a fascinating conflict of styles. Taylor prided himself on not “mugging” and here his reserved style worked well as Cassavetes’ older brother, a retired gunman. The pain of a man watching someone he brought up as son, not a younger brother, turn into an unstable, erratic killer is evident on Taylor’s craggy face. The younger brother is in constant motion–he seems to mistake activity for accomplishment.

Through a number of plot twists including disputed land ownership, romance (with Julie London) and brother-to-brother conflict, the film moves quickly and stylishly towards its inevitable end. The photography is excellent, making the best of the glorious scenery. Julie London is underused but does what she can.

In the end, New York and Hollywood work well together to make a highly watchable film.  Review by me for the IMDB.

I became a Robert Taylor fan at the age of 15 when his TV show, "The Detectives" premiered. My mother wanted to watch it because she remembered Mr. Taylor from the thirties. I took one look and that was it. I spent the rest of my high school career watching Robert Taylor movies on late night TV, buying photos of him, making scrapbooks and being a typical teenager. College, marriage and career intervened. I remember being sad when Mr. Taylor died. I mailed two huge scrapbooks to Ursula Thiess. I hope she got them. Time passed, retirement, moving to Florida. Then in 2012 my husband Fred pointed that there were two Robert Taylor movies that evening on Turner Classic Movies--"Ivanhoe" and "Quentin Durward." I watched both and it happened all over again. I started this blog both for fans and for people who didn't know about Robert Taylor. As the blog passes 200,000 views I'm delighted that so many people have come by and hope it will help preserve the legacy of this fine actor and equally good man.
View all posts by giraffe44 →
This entry was posted in Films and tagged 1958, acting, actor, adventure, brothers, entertainment, Golden Era, gunfighter, handsome, hollywood, John Cassavetes, Julie London, matinee idol, MGM, movie stars, New York, rancher, Robert Parrish, Robert Taylor, Rod Serling, settlers, the Method, Western. Bookmark the permalink.