Ride Vaquero Is Playing on TCM on September 19 (USA) 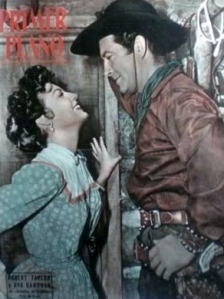 By keeping quiet, speaking only when necessary Robert Taylor as Rio gives one of his best performances. All through the film you try to guess what he is thinking. He was adopted by the mother of Esqueda (Anthony Quinn) and Quinn loves and respects him. The real surprise is Howard Keel, who only used to do musicals, coming out so well as King Cameron, a man who is obstinate about building a cattle empire. Cameron is married to Cordelia (Ava Gardner) and as soon as she arrives in a river boat, and they go to their ranch, trouble starts because it has been burnt by Esqueda. Why did Esqueda do it? Because he knows that if he allows anybody to do well in business in that area, others will come and eventually he, who is a bandit will have to run away or be hanged. Quinn is great as Esqueda, just that makes the film worth seeing. Taylor, who was the second man to Quinn in the gang, eventually leaves him to help Keel, because deep down he knows his brother is becoming a crazy monster and unconsciously he is in love with Ava. But when she kisses him, he slaps her because he knows it is wrong. He is a torn man, with all those feelings and not knowing exactly what to do about it. Excellent film, not to be missed. IMDB review by tmwest from Sao Paolo, Brazil.

I became a Robert Taylor fan at the age of 15 when his TV show, "The Detectives" premiered. My mother wanted to watch it because she remembered Mr. Taylor from the thirties. I took one look and that was it. I spent the rest of my high school career watching Robert Taylor movies on late night TV, buying photos of him, making scrapbooks and being a typical teenager. College, marriage and career intervened. I remember being sad when Mr. Taylor died. I mailed two huge scrapbooks to Ursula Thiess. I hope she got them. Time passed, retirement, moving to Florida. Then in 2012 my husband Fred pointed that there were two Robert Taylor movies that evening on Turner Classic Movies--"Ivanhoe" and "Quentin Durward." I watched both and it happened all over again. I started this blog both for fans and for people who didn't know about Robert Taylor. As the blog passes 200,000 views I'm delighted that so many people have come by and hope it will help preserve the legacy of this fine actor and equally good man.
View all posts by giraffe44 →
This entry was posted in Films and tagged acting, actor, adventure, Anthony Quinn, Ava Gardner, brothers, burning, celebrities, dark, entertainment, glamor, Golden Era, handsome, hollywood, Howard Keel, matinee idol, Mexicans, MGM, movie stars, notorious outlaws, rancher, Rio, Robert Taylor, TCM, torn man, Turner Classic Movies, Western. Bookmark the permalink.