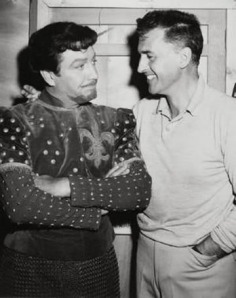 Robert Taylor & Stewart Granger on the set of “Quentin Durward,” (1955)

“Bob Taylor was the easiest person to work with but he had been entirely emasculated by the MGM brass who insisted that he was only a pretty face.

“‘Your problem is that you’re too bloody good-looking and it’s fashionable to say that good-looking guys can’t act.’ I used to tell him, but nothing would convince him.

“‘Do you know what they did, Jim, when they put me into Quo Vadis?  They showed me the test and told me to play the part just like you.’

Ann Blythe, Stewart Granger & Robert Taylor in “All the Brothers Were Valiant,” (1953)

“I roared with laughter.  ‘But that’s typical, Bob.  If I was so great why didn’t they use me?  They chose you because you’re a bloody fine actor. Just look at those arseholes in The Iron Lung, stunted, pot-bellied and bald, most of them. They’re jealous, that’s all.’ He was such a nice guy, Bob, but he had even more hang-ups than I had.

“In a way I think I can take some of the credit for the fantastic career of that brilliant actress Anne Bancroft.  She was under long-term contract to MGM and was cast as the Indian girl in this film, a fairly dreary part which would give Miss Bancroft no chance to show off her acting talents.  As usual the last scene in the picture was shot fairly near the beginning and this entailed me sweeping Anne up into the saddle and galloping off into the sunset.  Not an easy thing to do, to pick up a girl from the ground one-handed while trying to control a fractious horse. I pointed out the danger of this shot and suggested a double should be used but Brooks, although he must have known that nobody in the audience would tell the difference, insisted that Anne did the shot.  Telling her to spread her legs as I lifted her up so as to avoid the pommel I got ready.

“The horse was one of the Hollywood types who, on the words ‘get ready’ starts to play up and when ‘action’ comes, takes off like a bullet.  Trying to control him with one hand, I lifted Anne with the other, but the horse put in a buck at that moment and she landed hard, hitting her coccyx painfully on the pommel.  I did my best to hold her off and stop the galloping horse but the damage was done and by the time I finally pulled up she was in agony.  Quite rightly her lawyers sued MGM and as part of the settlement they agreed to cancel her long-term contract.  She went on to have a brilliant career in the theater and movies and, if it hadn’t been for me, she might still be playing Indian girls for MGM.  I know it was painful, Anne, but you really have me to thank.  If I’d been stronger it would never have happened.

“There was a lot of buffalo killing in this film and the crew like the rest of us were pretty sickened by the whole thing.  Brooks seemed to revel in taking close shots of maggots crawling out of the corpses littering the plains or of the skinning and butchering of the stinking animals that had been shot days before. 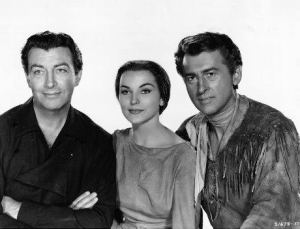 Taylor, Paget and Granger in a publicity photo for “The Last Hunt.”

“Although Bob Taylor and I, as the hunters, gave the impression we were shooting, the actual killing was done by the Park game wardens.  These protected buffalo were increasing rapidly and every year had to be culled to keep their numbers in line with the grazing available.  Fifty or so animals had to be slaughtered each year and in those days they were offered to hunters who could come and shoot their trophy, chosen by the game warden.  The hunters payed a large price for the pleasure of assassinating these harmless beasts, not really my idea of sport.  Presumably MGM had bought up all the licenses so we were allowed to have a prescribed number shot by the wardens.  But the corpses had to be there for many days for the sequences necessary in the film and naturally in that heat decomposed pretty rapidly.  To prevent this, refrigerated trucks would winch the bodies aboard each evening and the frozen corpses would be dumped back in thei original positions the following morning, a ghastly business that turned our stomachs and we were glad when it was all over and our last memories could be of the remaining herd grazing contentedly in the distance.  What horrors are sometimes necessary to entertain the cinema audiences of the world who demand realism? 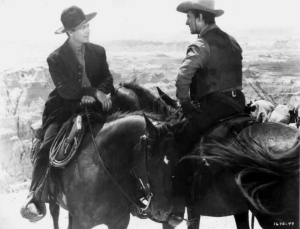 Robert Taylor and Stewart Granger in “The Last Hunt.”

“The last sequence of the film was supposed to take place during a freezing winter.  Naturally the film couldn’t be suspended for five months and had to be shot at the height of the summer.  The location chosen was the nearby Bad Lands, aptly named,  an area that is freezing in winter but a cauldron in summer.  The surrounding hills had been sprayed with a white powder to give the impression of a snowfall and the propellers of two high-powered plane engines created the gales hat were supposed to be blowing.  By throwing gypsum into the slipstream we had a very realistic snowstorm.  It was about 120 degrees at the time and Bob and I had to dress in thick clothes with scarves around our necks and ride into this stinging blast. The sweat was pouring off us as we pretended to be fighting for our lives in this ‘freezing’ blizzard.  Twice I passed out and the clothes had to be ripped off me to give my dehydrated body a chance to breathe. 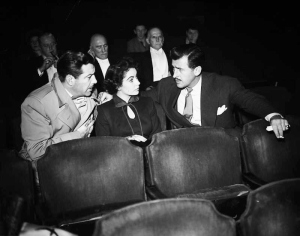 Robert Taylor, Elizabeth Taylor and Stewart at a rehearsal for the Royal Show. December 1948.

“Bob and I must have drunk about 50 gallons of water between us as it seemed to stream out of us quicker than we could pour it down.  I was worse off than Bob as I had to wear that bloody wig but in spite of being dehydrated,thrown off a horse, nearly killed in a buffalo stampede and almost crushed by an overturning wagon, ‘things’ must have been working as a few weeks after we returned to the studio, Jean [Simmons, Granger’s then wife] triumphantly told me she was pregnant.” (pages 336-338)

Stewart Granger and Robert Taylor in a publicity photo for “All the Brothers Were Valiant.”

I became a Robert Taylor fan at the age of 15 when his TV show, "The Detectives" premiered. My mother wanted to watch it because she remembered Mr. Taylor from the thirties. I took one look and that was it. I spent the rest of my high school career watching Robert Taylor movies on late night TV, buying photos of him, making scrapbooks and being a typical teenager. College, marriage and career intervened. I remember being sad when Mr. Taylor died. I mailed two huge scrapbooks to Ursula Thiess. I hope she got them. Time passed, retirement, moving to Florida. Then in 2012 my husband Fred pointed that there were two Robert Taylor movies that evening on Turner Classic Movies--"Ivanhoe" and "Quentin Durward." I watched both and it happened all over again. I started this blog both for fans and for people who didn't know about Robert Taylor. As the blog passes 200,000 views I'm delighted that so many people have come by and hope it will help preserve the legacy of this fine actor and equally good man.
View all posts by giraffe44 →
Gallery | This entry was posted in Memories and tagged acting, actor, adventure, All the Brothers Were Valiant, Ann Blyth, Anne Bancroft, brilliant actress, brothers, buffalo, buffalo hunt, celebrities, Debra Paget, dehydration, entertainment, freezing, glamor, Golden Era, handsome, hang ups, hollywood, Last Hunt, matinee idol, MGM, movie stars, mutiny, New Bedford, publicity photo, Quentin Durward, Richrd Thorpe, Robert Taylor, Stewart Granger, whaling. Bookmark the permalink.