June 8, 2013 is the 44th anniversary of Robert Taylor’s death from lung cancer.  As a personal tribute to him, these are my 10 favorite Taylor photos.  They demonstrate some of the many facets of his life, both professional and personal.  If anyone who reads this has a favorite photo of his/her own, I’d be happy to post it. 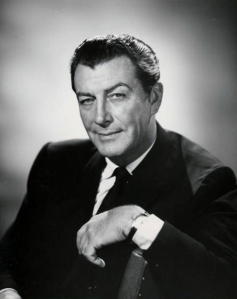 These are two formal portraits, the one on the left from 1935 and the one on the right from ca. 1960.  They both feature Mr. Taylor seated and smiling.  Both photos are filled with confidence.  The earlier one bristles with energy, as though Robert Taylor can’t wait to be up and doing something,  This energy is one of his leading characteristics in the thirties and he added a dynamic touch to a good many films.

Twenty five years later Mr. Taylor has a more composed, more contained attitude. His left arm is very relaxed. His smile is more restrained and there is an overall feeling of contentment.  He seems to be saying, “I’ve done all right.  I like who I am.”  In 1935 Robert Taylor looks off into the distance, in 1960 he looks straight at the viewer.  Both photos show a great deal of charm and a personality that transcends good looks.

Robert Taylor has never gotten the credit he deserves for his acting skills.  He was an amazingly versatile actor who could play everything from a gangster to a Roman comander to Ivanhoe to a tough, doomed soldier.  He inhabited his characters completely.   These two photos illustrate my point.  The left hand picture is on the set of High Wall, 1947.  Mr. Taylor’s character is a brain injured veteran, Steven Kenet,  who is confined to a mental institution and who may be a murderer.  There is no trace of Robert Taylor here. Kenet stands flat footed with his thumbs hooked into his pockets and his eyes blank.  His hair is disheveled and he is unshaven.  Mr. Taylor has become Steven Kenet but he’s not absorbed by the character.  He was famous for never bringing his characters home.

The other photo (right) is Robert Taylor costumed as Roman Commander Marcus Vinicius in Quo Vadis (1950).  But it isn’t Vinicius, it’s Taylor. His face is relaxed and open with a charming smile.   He leans forward as though he hears something interesting and potentially funny,  Vinicius is a severe and driven person–self-centered and, in the beginning, cruel.  Robert Taylor had an integrity and forthrightness that shows in his candid and natural expression. 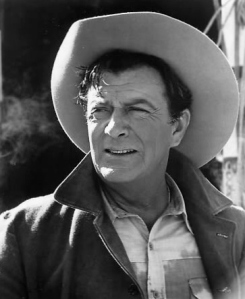 It’s hard to explain why I like these two pictures so much.  The one on the left is from the mid-fifties and shows a relaxed and confident Robert Taylor looking directly at the viewer.  At this point he has been a movie star for twenty years, a survivor in one of the most competitive professions there is.  He looks younger than his 44 years.

The right hand photo is from Death Valley Days, the series Mr. Taylor hosted and sometimes starred in during the late sixties.  This was taken in 1968, the next to last year of his life.  His face reflects a life in the out-of-doors, the ravages of cigarette smoking and possibly his health problems.  Nonetheless it is a strong face, animated and masculine. Robert Taylor lived life fully and made the most of his years.  His face is now striking, not “beautiful,” and it is hard to look away. 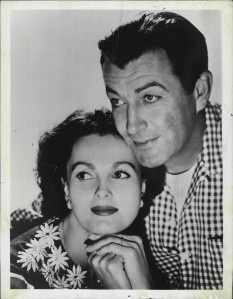 These are wonderful because they show Mr. Taylor finally happy in his personal life.  After a difficult childhood and a failed marriage to Barbara Stanwyck, he found the love of his life, Ursula Thiess.  The right hand photo is of Mr. and Mrs. Taylor shortly after their marriage in 1954.  The Taylor face simply radiates happiness.  Looking at this photo makes me happy.

The left hand shot is from LIFE magazine in 1961 and was taken at the Taylor cabin in Wyoming.  Mr. Taylor holds his daughter Tessa, 2, in his lap. There is a feeling of utter contentment, of relaxation, of a deep happiness in life.  Marriage to the right woman and having a family made the latter part of Robert Taylor’s life his happiest personally.  It’s good to know that his short life ended with such stability and love.

Both of these pictures make me smile.  The one on the left is enigmatic.  What is the hand out for?  My interpretation is that Mr. Taylor has won a bet and is waiting for his money.  He seems most amused by the whole thing.  If anyone knows the real story, let me know.

On the right Robert Taylor meets a professional challenge.  He is supposed to be driving a Roman chariot at full speed along the Appian way.  There is a chariot, but no horses  and no road.  These will be added later.  There is only the green screen behind him. Someone is holding the reins out straight.  In the film this is very serious business as he races to save his beloved.  Here Mr. Taylor has a huge grin on his face and I imagine this is before the cameras were rolling.

It is a tragedy that Robert Taylor was unable to stop smoking.  Numerous friends tried to get him to stop. He told director Henry Koster that he had stopped many times but always started up again.  Mr. Taylor hoped that “nothing bad would happen.”  Well, it did, inevitably.  Some people just cannot stop.  A favorite professor of mine, a world renowned archaeologist, had the same problem and died before her time.

Robert Taylor represented talent, professionalism, versatility, honor and integrity.  Yes he had outstanding looks and yes he had his faults.  But he worked hard, met his obligations, loved his family, loved his country.  Millions of people still view his seventy-seven films.  Rest In Peace, Mr. Taylor.

I became a Robert Taylor fan at the age of 15 when his TV show, "The Detectives" premiered. My mother wanted to watch it because she remembered Mr. Taylor from the thirties. I took one look and that was it. I spent the rest of my high school career watching Robert Taylor movies on late night TV, buying photos of him, making scrapbooks and being a typical teenager. College, marriage and career intervened. I remember being sad when Mr. Taylor died. I mailed two huge scrapbooks to Ursula Thiess. I hope she got them. Time passed, retirement, moving to Florida. Then in 2012 my husband Fred pointed that there were two Robert Taylor movies that evening on Turner Classic Movies--"Ivanhoe" and "Quentin Durward." I watched both and it happened all over again. I started this blog both for fans and for people who didn't know about Robert Taylor. As the blog passes 200,000 views I'm delighted that so many people have come by and hope it will help preserve the legacy of this fine actor and equally good man.
View all posts by giraffe44 →
This entry was posted in Biography and tagged 1930s, 1935, 1961, 1968, acting, actor, Barbara Stanwyck, celebrities, entertainment, glamor, Golden Era, handsome, hollywood, images, interpretation, marriage, matinee idol, MGM, movie stars, photography, photos, Quo Vadis, Robert Taylor, Ursula Thiess, Wyoming. Bookmark the permalink.