Robert Taylor endorsed a number of products during the course of his career.  Today someone who does this has to confirm that he or she actually uses the product.  I thought it would be interesting to see  if these are products Mr. Taylor might actually have owned.

Yes, it’s a “thank you” for this and a “my congratulations” for that 365 days a year in Hollywood, where your friends and business associates are constantly about to enjoy, or eager to commemorate, a triumph.  {Quo Vadis, anyone?}

Many Hollywood stars have found that a Whitman’s Sampler is an ideal messenger of good will.and when it comes to an expression of honest gratitude for a kindness, a Whitman’s sampler is a definite “must.”

Robert Taylor says: “It’s surely not an accident that women everywhere look upon a gift of this famous box of candy as a special compliment.”

For a Whitman’s Sampler says as much-and much better.!

Photo caption: Few stars are kept busier—and with good reason, than Robert Taylor. But with all his picture demands, he finds, or makes, time to be thoughtful. Like many other  stars, he lets a Whitman’s Sampler say “Thanks a lot for your help!” to fellow workers on the set. Needless to say, they appreciate it.

I find this totally believable.  Mr. Taylor was famous for his thoughtulness. He encouraged beginning actors, treated child actors with adult courtesy, made the sets he worked on as pleasant as possible.  Garbo was feeling unwell during the filming of Camille and Robert Taylor provided her favorite music to soothe her.  Arlene Dahl recalls his generosity and support for a young actress when they worked on Ambush.  Countless others have called him a gentleman, with all that implies. I can easily imagine him giving chocolates as thank you gifts.

I can’t read the text of this ad below the headline. So I’ve substituted the text from an ad in the same series with Bob Hope. Each ad in the series was very similar to the others. The date of Mr. Taylor’s ad is July 28, 1958.

I never carry more than $50 in cash, says Robert Taylor, starring in MGM’s “The Law and Jake Wade.”

When I travel, I always carry my money in American Express Travelers Checks. Then I know it’s safe. Spendable anywhere, good until used, prompt refund if lost or stolen. Buy them at your Bank, at Railway Express and Western Union Offices. Charges, only a penny a dollar. Bob Hope.

Again, this is  quite believable. In the studio era, MGM coddled its stars, taking care of practically everything for them. Ursula Thiess wrote in her memoir that her husband had trouble making a dinner reservation after leaving the studio, because he had never done so. By some accounts, Mr. Taylor often didn’t carry cash as he could sign for everything. A credit card would have been very useful for him. 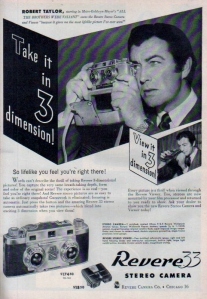 Another ad comes from 1953.  I do wonder if this camera was successful.

Robert Taylor, starring in MGM’s All the Brothers were Valiant, uses the Revere Stereo Camera and viewer “because it gives me he most lifelike picture I’ve ever seen.”

So lifelike you feel you’re right there.

Words can’t describe the thrill of taking 3-dimensional pictures! You capture the same breath-taking depth, form and color of the original scene. The experience is so real—you feel you’re right there. And Revere stereo pictures are as easy to take as ordinary snapshots! Guesswork is eliminated, focusing is automatic. Just press the buttons and the amazing Revere stereo camera automatically takes two pictures which blend into exciting 3 dimensions when you view them.

View it in 3 dimension!

Every picture is a thrill when viewed through the Revere Viewer. Too, stereos are now mounted by your film processor and returned to you ready to show. Ask your dealer to show you the new Revere Stereo Camera and Viewer today!

Totally believable.  There are dozens of pictures of Mr. Taylor holding a camera and/or taking pictures.  In her biography, Robert Taylor, the Man with the Perfect Face, Jane Ellen Wayne says “other extravagances of Taylor’s were guns and camera equipment.  Although he was a master with rifles, he could not get the hang of a camera.  On special occasions he would spend hours setting up his very expensive equipment and get  everyone to pose just so, but few pictures ever turned out.  If it hadn’t been for Ursula and her Brownie camera, there might never have been a family album.” (page 223) 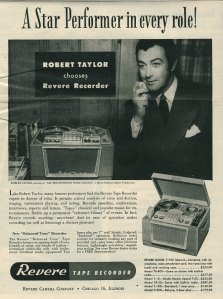 Revere strikes again with an expensive tape recorder–$225 was a lot of money in 1953. The ad reads:

Like Robert Taylor, many famous performers find the Revere Tape Recorder expert in dozens of roles. It perfects critical analysis of voice and diction, singing, instrument playing, and acting. Records speeches, conferences, interviews, reports and letters. “Tapes” classical and popular music for entertainment. Builds up a permanent “reference library” of events. In fact, Revere records anything–anywhere! And its ease of operation makes recording (as well as listening) a distinct pleasure!

This is an easy one. This sounds like something any actor would use regularly.

From 1938–unfortunately I can’t read most of the text of this Maxwell House Coffee ad. 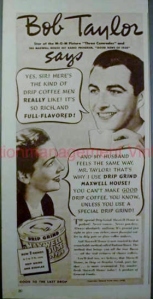 Another no-brainer. Robert Taylor lived with a large thermos of coffee. It came to work with him, took car trips with him, flew to distant locations with him. There are dozens of photos of gorgeous ladies–Deborah Kerr, Ava Gardner, Liz Taylor etc.–sharing the contents of the thermos. Around 1960 Robert and Ursula Taylor made a TV commercial for Maxwell House. I believe it first ran during “The Detectives.” You can find it on You Tube.

In the 1930’s, celebrities were paid a great deal to endorse tobacco products. 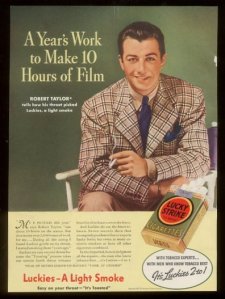 My 8 pictures this year, says Robert Taylor, “run about 10 hours on the screen. But that meant over 2000 hours of work for me….During all this acting I found Luckies gentle on my throat. I started smoking them 7 years ago.”

Luckies are easy on your throat because the “toasting” process takes out certain harsh throat irritants found in all tobacco–even the finest.

And Luckies do use the finest tobacco. Sworn records show that among independent tobacco experts lucky strike has twice as many exclusive smokers as have all other cigarettes combined.

In the impartial, honest judgment of the experts…the men who know tobacco best…it’s Luckies… 2 to 1.

Star of Metro-Goldwyn-Mayer’s A Yank at Oxford.

“But even after the fight scene in M-G-M’s Yank at Oxford,says Robert Taylor, “I still found Luckies easy on my throat.”

1. “Punches can be pulled on the screen,” says Robert Taylor, “but there’s no faking a yell. In my picture Yank at Oxford, I get into one swell brawl. That scene took two solid days to film. As a result…
2. “My voice and throat got a terrific workout.English members of the cast were interested that I smoked in the middle of such throat taxing work. But I explained to them about Luckies and…
3. “Believe me, our English friends now go for Luckies–including Herbert Marshall, Madelaine Carroll and others in Hollywood’s British colony. In England I found many new converts.
4. “I pointed out that tobacco experts prefer Luckies 2 to 1, and that the ‘toasting’ process makes Luckies easy on the throat. (It removes certain irritants found in all tobacco.)”
5. “Bob M. Cooper auctions about 20,00,000 lbs. of tobacco yearly. He says: I know tobacco and I pick Luckies. They suit my throat and my taste.’ Sworn records show that among independent tobacco experts, Luckies have twice as many exclusive smokers as all other cigarettes combined.

From redOrbit.com: “Researchers uncovered a list of payments for a single year in the late 1930s detailing how much American Tobacco, the makers of Lucky Strike, paid certain stars.

Leading ladies Carole Lombard, Barbara Stanwyck and Myrna Loy were handed $10,000, equivalent to just under $150,000 in today’s money, to endorse the brand, as were Clark Gable, Gary Cooper and Robert Taylor.

From PopHistory.com January 31, 2010: “The FTC, meanwhile, in its earlier investigation of the film-star tobacco ads, had also ordered American Tobacco to disclose payments made for actor testimonials used in its advertising. However, by 1934, American Tobacco successfully removed this disclosure requirement, presumably through its lobbying of the agency. From the late 1930s through the 1940s, two thirds of the top 50 box office stars in Hollywood would endorse tobacco products in advertising. Soon, the FTC’s attempt to clamp down on the relationship between big tobacco and its Hollywood helpers was largely 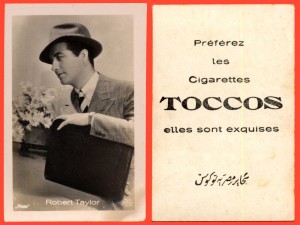 circumvented. Some internal film industry prohibitions on actor endorsements — briefly in effect in 1931 – would be bypassed as well. By 1937 and 1938, American Tobacco was paying to have a long list of Hollywood stars to appear in its ads, including: Gary Cooper, Claudette Colbert, Joan Crawford, Henry Fonda, Bob Hope, Carole Lombard, Ray Milland, Robert Montgomery, Richard Powell, George Raft, Edward G. Robinson, Barbara Stanwyck, Gloria Swanson, Robert Taylor, Spencer Tracy, and Jane Wyatt. The payments to stars ranged in value, in 2008 dollars, generally from $40,000 to $140,000 for each endorsement. In all, American Tobacco payed out the 2008 equivalent of some $3.2 million for actor endorsements of Lucky Strike cigarettes in print ads and radio spots in 1937-38. In fact, from the late 1930s through the 1940s, two thirds of the top 50 box office stars in Hollywood would endorse tobacco products in advertising.”

What a terrible shame! It’s so sad to see picture after picture of Robert Taylor smoking. It’s difficult to find a picture where he isn’t. He began smoking either in his early teens or in college and was never able to stop, despite support from his family and friends. When you know how it all ends, you just want to grab the cigarette out of his hand and yell at him to stop.

In the 1930’s, we didn’t know what we know now about smoking, so being paid a substantial amount of money for a perfectly legal activity would have been very tempting. Mr. Taylor was always concerned about providing adequately for his family and $10,000 would have helped.

Let’s end on a positive note with this public service announcement from the early 1940s. I’m sure Robert Taylor and the others were happy to lend their support to such a good cause.  From left to right: Ronald Reagan, Clark Gable, Robert Taylor, Douglas Fairbanks, Jr., Alan Ladd, Tyrone Power, Jimmy Stewart, Robert Sterling, Robert Montgomery, Robert Young. 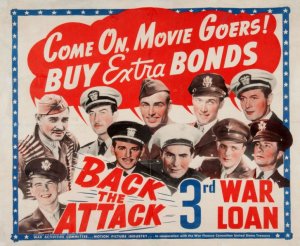 I became a Robert Taylor fan at the age of 15 when his TV show, "The Detectives" premiered. My mother wanted to watch it because she remembered Mr. Taylor from the thirties. I took one look and that was it. I spent the rest of my high school career watching Robert Taylor movies on late night TV, buying photos of him, making scrapbooks and being a typical teenager. College, marriage and career intervened. I remember being sad when Mr. Taylor died. I mailed two huge scrapbooks to Ursula Thiess. I hope she got them. Time passed, retirement, moving to Florida. Then in 2012 my husband Fred pointed that there were two Robert Taylor movies that evening on Turner Classic Movies--"Ivanhoe" and "Quentin Durward." I watched both and it happened all over again. I started this blog both for fans and for people who didn't know about Robert Taylor. As the blog passes 200,000 views I'm delighted that so many people have come by and hope it will help preserve the legacy of this fine actor and equally good man.
View all posts by giraffe44 →
Gallery | This entry was posted in Biography and tagged $10, 000, 1930s, A Yank at Oxford, acting, actor, celebrities, chocolates, cigarettes, glamor, Golden Era, Lucky Strikes, lung cancer, Maxwell House Coffee, MGM, movie stars, Revere Cameras, Revere Tape Recorder, tobacco, tobacco endorsements, Ursula Thiess, Whitman's Sampler. Bookmark the permalink.