You Would Have Liked Him

At home with Ursula and the kids.

He epitomized an era of motion pictures: a time in the 30s, 40s and 50s when all leading men were handsome.

During those three decades the matinee idol was at his height: Clark Gable, Tyrone Power, Robert Montgomery and even John Barrymore in his waning years.

Compared to today’s fiery leading men, Robert Taylor and his breed are strangers.

Their roles seldom called for the introspective, passionate self-examination of the id and idiocy of being a human animal. They knew they were men and felt it unnecessary to prove it on-screen or off.

They may have played romantic roles. But they wound up with the leading lady in their arms. And they had sustaining power, those actors named Cooper, Jim Stewart, Bogart and John Wayne. They lasted.

With the exception of Bogy, and perhaps Barrymore–both of whom had a taste for the grape–the great stars of Taylor’s generation were very gentle men.

Of them all, Bob Taylor was perhaps the most popular in Hollywood.

Most of his career was spent under contract to MGM where he made film after film, good or bad. He lived up to his contract, fought with no one–except when the script called for it.

He never won an Oscar. But Bob Taylor was on the set every morning in make-up and wardrobe and with his lines memorized. A professional. 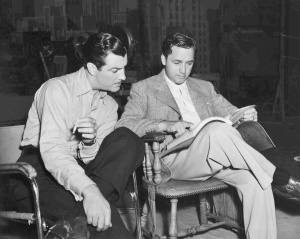 His leading ladies were the best that once-powerful MGM could find, from Greta Garbo to the glamor girls of the 50s.

I talked to Taylor a few weeks before his death. He knew it was coming, but he fought it in his quiet way, much as did Gary Cooper. He said at the time he was more angry than afraid or worried.

Taylor lived quietly in Mandeville Canyon on a ranch, isolated from the Hollywood hubbub. He liked flying his own plane, riding horses, hunting and fishing. Nightclubs were for the show-offs, dilettantes and makers of headlines.

He was a quiet man and a poor one to interview. He had no hostilities to loose on the world. Bob couldn’t understand why anything he had to say was more important than anyone else’s opinion.

But he always made the attempt to say something interesting or humorous, to do what was expected of him.

Unlike many of his contemporaries, Taylor was a stranger to scandal. Even his divorce from Barbara Stanwyck, his first wife, was without clamor.

To the end Robert Taylor maintained his dignity, his privacy and the affection of his friends.

In a community filled with egomaniacs and pretenders, Robert Taylor was a man and a gentleman. You would have liked him very much.

I became a Robert Taylor fan at the age of 15 when his TV show, "The Detectives" premiered. My mother wanted to watch it because she remembered Mr. Taylor from the thirties. I took one look and that was it. I spent the rest of my high school career watching Robert Taylor movies on late night TV, buying photos of him, making scrapbooks and being a typical teenager. College, marriage and career intervened. I remember being sad when Mr. Taylor died. I mailed two huge scrapbooks to Ursula Thiess. I hope she got them. Time passed, retirement, moving to Florida. Then in 2012 my husband Fred pointed that there were two Robert Taylor movies that evening on Turner Classic Movies--"Ivanhoe" and "Quentin Durward." I watched both and it happened all over again. I started this blog both for fans and for people who didn't know about Robert Taylor. As the blog passes 200,000 views I'm delighted that so many people have come by and hope it will help preserve the legacy of this fine actor and equally good man.
View all posts by giraffe44 →
This entry was posted in Biography and tagged acting, actor, admired, Barbara Stanwyck, celebrities, diginity, drama, egomaniacs, entertainment, gentleman, glamor, Golden Era, handsome, hollywood, leading men, Mandeville Canyon, marriage, matinee idol, MGM, movie stars, popular, pretenders, romance, Ursula. Bookmark the permalink.