I just ran across this in an article and can’t resist passing it along.  Oh, for a picture. 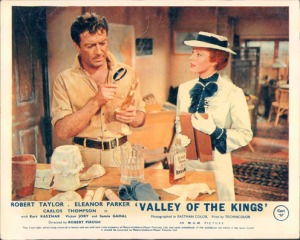 From Samir Rafaat, “Cinema Metro,” Cairo Times (unedited version),  Thursday, May 15, 1997.  In 1955, Robert Taylor and Eleanor Parker attended the grand premiere of “Valley of the Kings” (directed by Robert Pirosh) which coincided with the festive events that followed the groundbreaking  ceremony of the Nile Hilton Hotel on Tahrir Square.  It was on that occasion that Samia Gamal dragged Robert Taylor onto center stage where the American superstar, wearing a tarboush and belted the traditional way, danced with Egypt’s foremost belly dancer before an enthralled audience. 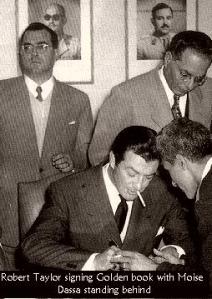 Taken at Cinema Metro in Cairo at the time of the premiere of “Valley of the Kings.” 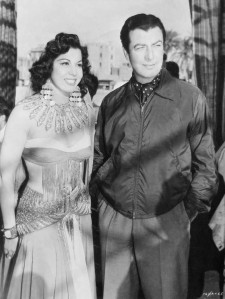 I became a Robert Taylor fan at the age of 15 when his TV show, "The Detectives" premiered. My mother wanted to watch it because she remembered Mr. Taylor from the thirties. I took one look and that was it. I spent the rest of my high school career watching Robert Taylor movies on late night TV, buying photos of him, making scrapbooks and being a typical teenager. College, marriage and career intervened. I remember being sad when Mr. Taylor died. I mailed two huge scrapbooks to Ursula Thiess. I hope she got them. Time passed, retirement, moving to Florida. Then in 2012 my husband Fred pointed that there were two Robert Taylor movies that evening on Turner Classic Movies--"Ivanhoe" and "Quentin Durward." I watched both and it happened all over again. I started this blog both for fans and for people who didn't know about Robert Taylor. As the blog passes 200,000 views I'm delighted that so many people have come by and hope it will help preserve the legacy of this fine actor and equally good man.
View all posts by giraffe44 →
This entry was posted in Films and tagged acting, actor, adventure, belly dancing, Cairo, celebrities, drama, Egypt, Eleanor Parker, entertainment, gentleman, glamor, Golden Era, handsome, hollywood, matinee idol, MGM, movie stars, Robert Taylor, Samir Gamal, signing, superstar, Valley of the Kings. Bookmark the permalink.