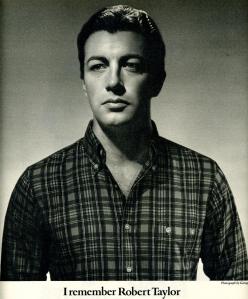 f the ad: His face made over $300,000,000 for MGM. Yet Robert Taylor never knew what the fuss was all about. He preferred to spend his time on the 113 acre ranch he placed between himself and the rest of the world. His own idea of dressing up was a pair of boots, jeans, and a simple plaid shirt.

And that’s the way I remember him in my Great Men Shirt Collection.

It recalls the men who together defined our concept of virility in the 20th century. And it recreates the shirts they wore when they were most being themselves.

And in keeping with its origins, the shirts are made with a craftsmanship and attention to detail rarely seen since before the war.

The shirt pictured here is a brushed twill, and it is recreated exactly as you see it. No shortcut was taken, no corner cut.

It’s the kind of shirt Robert Taylor wore whenever he wanted to feel at ease. Now you can too.

At better stores (see list at left), or send a postcard to John Weitz, The Great Men Shirt Collection, 1221 Avenue of the Americas, New York, New York 10020, for the name of your nearest store.

I became a Robert Taylor fan at the age of 15 when his TV show, "The Detectives" premiered. My mother wanted to watch it because she remembered Mr. Taylor from the thirties. I took one look and that was it. I spent the rest of my high school career watching Robert Taylor movies on late night TV, buying photos of him, making scrapbooks and being a typical teenager. College, marriage and career intervened. I remember being sad when Mr. Taylor died. I mailed two huge scrapbooks to Ursula Thiess. I hope she got them. Time passed, retirement, moving to Florida. Then in 2012 my husband Fred pointed that there were two Robert Taylor movies that evening on Turner Classic Movies--"Ivanhoe" and "Quentin Durward." I watched both and it happened all over again. I started this blog both for fans and for people who didn't know about Robert Taylor. As the blog passes 200,000 views I'm delighted that so many people have come by and hope it will help preserve the legacy of this fine actor and equally good man.
View all posts by giraffe44 →
Gallery | This entry was posted in Biography and tagged $300.000.000, 1930s, acting, actor, ad, celebrities, entertainment, glamor, Golden Era, handsome, hollywood, John Weitz, legend, matinee idol, MGM, movie stars, Robert Taylor, shirt. Bookmark the permalink.