Here are a few fun items I came across recently: 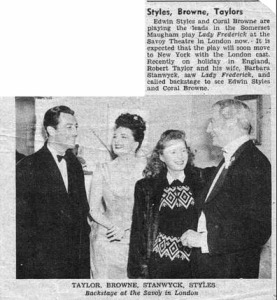 Text:  Edwin Styles and Coral Browne are playing the leads in the Somerset Maugham play Lady Frederick at the Savoy theatre in London now.  It is expected that the play will soon move to New York with the London cast.  Recently on Holiday in England, Robert Taylor and his wife Barbara Stanwyck, saw Lady Frederick and called backstage to see Edwin Styles and Coral Browne. (probably 1947 or 1948). 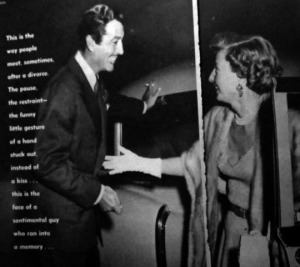 Text:  This is the way people meet sometimes after a divorce.  The pause, the restraint, the funny little gesture of a hand stuck out instead of a kiss.  This is the face of an unsentimental guy who ran into a memory. 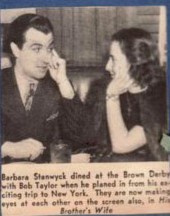 Text:  Barbara Stanwyck dined at the Brown Derby with Bob Taylor when he planed in from his exciting trip too New York.  They are now making eyes at each other on the screen also, in His Brother’s Wife.

I became a Robert Taylor fan at the age of 15 when his TV show, "The Detectives" premiered. My mother wanted to watch it because she remembered Mr. Taylor from the thirties. I took one look and that was it. I spent the rest of my high school career watching Robert Taylor movies on late night TV, buying photos of him, making scrapbooks and being a typical teenager. College, marriage and career intervened. I remember being sad when Mr. Taylor died. I mailed two huge scrapbooks to Ursula Thiess. I hope she got them. Time passed, retirement, moving to Florida. Then in 2012 my husband Fred pointed that there were two Robert Taylor movies that evening on Turner Classic Movies--"Ivanhoe" and "Quentin Durward." I watched both and it happened all over again. I started this blog both for fans and for people who didn't know about Robert Taylor. As the blog passes 200,000 views I'm delighted that so many people have come by and hope it will help preserve the legacy of this fine actor and equally good man.
View all posts by giraffe44 →
Gallery | This entry was posted in General and tagged Barbara Stanwyck, Brown Derby, Coral Browne, Edwin Styles, His Brother's Wife, Robert Taylor, Savoy. Bookmark the permalink.