Flight Command, 1940, is playing on Turner Classic Movies on Sunday, May 26 at 12 noon est.  Closed captioned. This is the film that got Robert Taylor hooked on flying.  Mr. Taylor started taking flying lessons right away.  His devotion to flying was so intense that Barbara Stanwyck, his wife, felt neglected. 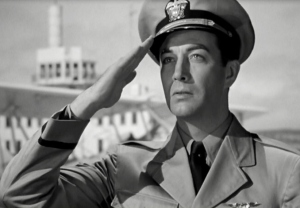 Lots of fun. Wells Root and Commander Harvey Haislip penned this screenplay from an original story Haislip also co-authored about an eager Naval Flight School cadet (Robert Taylor) in Pensacola flying solo out to Southern California to join Hellcat Fighters who have just lost one of their beloved teammates; he makes a colorful entrance (having to ditch his plane and parachute into the ocean because of fog!) and finds an early friend in a somewhat-emotional woman…the Skipper’s wife! Camaraderie between the pilots on the ground is enjoyably written and played, with Taylor’s charming self-assurance an interesting dynamic within the group (he isn’t cocky, he’s careful–though anxious to fit in). Subplot with Ruth Hussey’s lonesome wife is soapy yet surprisingly skillful, while the aerial maneuvers are nicely photographed. An extra bonus: Red Skelton as a joshing lieutenant…and Walter Pidgeon looking younger than I have ever seen him.  Review by monspinner55 on IMDB

Some more photos.  Ruth Hussey and Walter Pigeon appear in some of them:

I became a Robert Taylor fan at the age of 15 when his TV show, "The Detectives" premiered. My mother wanted to watch it because she remembered Mr. Taylor from the thirties. I took one look and that was it. I spent the rest of my high school career watching Robert Taylor movies on late night TV, buying photos of him, making scrapbooks and being a typical teenager. College, marriage and career intervened. I remember being sad when Mr. Taylor died. I mailed two huge scrapbooks to Ursula Thiess. I hope she got them. Time passed, retirement, moving to Florida. Then in 2012 my husband Fred pointed that there were two Robert Taylor movies that evening on Turner Classic Movies--"Ivanhoe" and "Quentin Durward." I watched both and it happened all over again. I started this blog both for fans and for people who didn't know about Robert Taylor. As the blog passes 200,000 views I'm delighted that so many people have come by and hope it will help preserve the legacy of this fine actor and equally good man.
View all posts by giraffe44 →
This entry was posted in Films and tagged actor, aviation, flight instructor, flying, Harvey Haislip, hollywood, MGM, movie stars, Red Skelton, Robert Taylor, Ruth Hussey, TCM, transportation, Turner Classic Movies, Walter Pidgeon. Bookmark the permalink.