Loew’s Weekly was a free publication for moviegoers at Loew’s theatres.  This is from their August 28, 1936 edition.

Broadway has become a one-way street called “Lovers Lane!”  All traffic leads one way to see Bob Taylor and Barbara Stanwyck in M-G-M’s new sensational hit His Brother’s Wife.  No picture has drawn so many feminine filmgoers–and, of course, Bob Taylor is to blame.  He is the world’s new heart-throb!  Even the Statue of Liberty is carrying the torch for Bob! 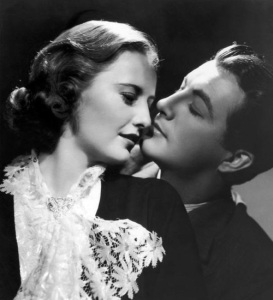 “You mustn’t kiss me, I’m your brother’s wife”–Barbara to Bob.! (original caption)

Joining with the New York women and girls who are paying palpitating homage to Bob and Barbara as they  make screen love in His Brother’s Wife, the feminine movie critics admit they too get a thrill out of our new favorite hero!  Bland Johanneson of the Mirror says that it’s another “fever heat romance that will delight the ladies.”  Rose Pelswck of the Journal recommends it as “a fine piece of summer fare.”  Kate  Cameron of the News pays tribute to Bob Taylor, too.  Regina Crewe of the American also praises the “Taylor-made” romance!

Appearing opposite Joan Crawford in her next picture will be three handsome leading men when she is seen in The Gorgeous Hussy, dramatic romance of the nation’s capital during the early 19th century.

Robert Taylor has the role of Bow Timberlake, officer of the U.S. Navy and the first

husband of tempestuous Peggy O’Neal, the tavern keeper’s daughter who rose to an amazing career in the social life of Capitol Hill.

Throughout the story of The Gorgeous Hussy stalk such colorful figures as Dolly Madison, Andrew Jackson and Henry Clay.

His Brother’s Wife, M-G-M’s newest screen hit, co-starring Barbara Stanwyck and Robert Taylor with Jean Hersholt and Joseph Calleia in the featured roles and Women Are Trouble, with Stuart Erwin, Paul Kelly and Florence Rice, are the two outstanding features due on the same program next Fri., Sat, and Sun., September 4, 5 and 6.

In His Brother’s Wife, Robert Taylor achieves Hollywood stardom.  He plays the role of a promising scientist who is about to head into the jungle in an effort to master a deadly disease.  Taking a last fling in New York, just before sailing, he meets a lovely girl in a gambling casino and instantly falls in love with her.

The younger brother influences the scientist into leaving and in revenge the girl marries the brother.  From this point the story climax mounts to great proportions.

I became a Robert Taylor fan at the age of 15 when his TV show, "The Detectives" premiered. My mother wanted to watch it because she remembered Mr. Taylor from the thirties. I took one look and that was it. I spent the rest of my high school career watching Robert Taylor movies on late night TV, buying photos of him, making scrapbooks and being a typical teenager. College, marriage and career intervened. I remember being sad when Mr. Taylor died. I mailed two huge scrapbooks to Ursula Thiess. I hope she got them. Time passed, retirement, moving to Florida. Then in 2012 my husband Fred pointed that there were two Robert Taylor movies that evening on Turner Classic Movies--"Ivanhoe" and "Quentin Durward." I watched both and it happened all over again. I started this blog both for fans and for people who didn't know about Robert Taylor. As the blog passes 200,000 views I'm delighted that so many people have come by and hope it will help preserve the legacy of this fine actor and equally good man.
View all posts by giraffe44 →
This entry was posted in Films and tagged 1930s, Barbara Stanwyck, Franchot Tone, Golden Era, His Brother's Wife, hollywood, Jean Hersholt, Joan Crawford, Joseph Calleia, Loew's Weekly, MGM, Robert Taylor, romance, The Gorgeous Hussy. Bookmark the permalink.