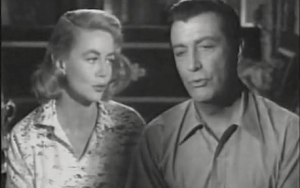 Tip on a Dead Jockey looks at the plight of a veteran pilot who is suffering from what we now call post-traumatic stress disorder. Lloyd Tredman (Robert Taylor) has decided to drift along in life, hiding away from family and friends in Madrid. His wife (Dorothy Malone) was about to divorce him, at his request, but changes her mind and goes after her man. Taylor is living on the fringes of Madrid society, giving rowdy parties and avoiding work. He is also carrying on a mild flirtation with his neighbor (Gia Scala) wife of his service buddy (Jack Lord). After losing his shirt when a jockey is killed during a race, Taylor is handed an offer by Martin Gabel–a simple matter of flying some currency from one point to another–illegal but not dangerous. He at first refuses then accepts the offer to save Lord from doing it and becoming a criminal. Taylor has to overcome his terror of flying to help his friend. Marcel Dalio provides some comic relief as does Joyce Jameson as a drunken lady who doesn’t know how she ended up in Taylor’s bed. Nothing goes smoothly, of course, drugs enter the picture and Taylor has to decide what he will or will not do. The film was originally scheduled to be directed by Orson Welles but he dropped out and Richard Thorpe took over. Not a great film but solid entertainment done professionally by a very good cast. Review by me for TCM.

Here are some of the promotional materials for the film:

I became a Robert Taylor fan at the age of 15 when his TV show, "The Detectives" premiered. My mother wanted to watch it because she remembered Mr. Taylor from the thirties. I took one look and that was it. I spent the rest of my high school career watching Robert Taylor movies on late night TV, buying photos of him, making scrapbooks and being a typical teenager. College, marriage and career intervened. I remember being sad when Mr. Taylor died. I mailed two huge scrapbooks to Ursula Thiess. I hope she got them. Time passed, retirement, moving to Florida. Then in 2012 my husband Fred pointed that there were two Robert Taylor movies that evening on Turner Classic Movies--"Ivanhoe" and "Quentin Durward." I watched both and it happened all over again. I started this blog both for fans and for people who didn't know about Robert Taylor. As the blog passes 200,000 views I'm delighted that so many people have come by and hope it will help preserve the legacy of this fine actor and equally good man.
View all posts by giraffe44 →
This entry was posted in Films and tagged aviation, Dorothy Malone, entertainment, flying, Gia Scala, hollywood, Jack Lord, Joyce Jameson, Lloyd Tredman, Madrid, Marcel Dalio, MGM, movie stars, post-traumatic stress disorder, Richard Thorpe, Robert Taylor, TCM, Tip on a Dead Jockey, Turner Classic Movies. Bookmark the permalink.