At four o’clock one Saturday afternoon, Robert Taylor left the set, having spent the day testing under the technicolor lights.  The director called out, “Get a good rest over the weekend, Bob.”

Ever since Bob Taylor has been in pictures, he has wanted to play in a Western film.  When he was a kid, his hero was Tom Mix, as his mother can testify bitterly, for Mix was to blame for causing Bob’s family a day of anguish.  It happened on a sunny Saturday.  Bob had been playing outdoors.  When he didn’t come in for his lunch, his mother was worried.  At three o’clock there were search parties out for him.  At five o’clock, his poor

mother was sure he had either run away from home or been killed.  They found him, finally, at the local movie house where he had spent the day seeing a Mix picture over and over again.  He had brought a couple of sandwiches and eaten them between hair-breadth escapades.

Not only his adoration for Western heroes, but his love of horses made Bob eager to play in a Western.  He had a pony of his own when he was a child and rode almost before he could walk.  And yet he had never appeared in an outdoor film.  When they handed him a script of Billy the Kid and told him he was going to do it, his face lit up like an airplane beacon.  “All that gun toting, wild riding stuff really gets me,” Bob said. “I guess it’s just the ham in me.”

And yet his close associates will tell you that Bob Taylor is  one of the least “hammy” actors in Hollywood.  He is a living example of the fact that Hollywood demands a normal life.  And that’s just the sort of life that Taylor wants. 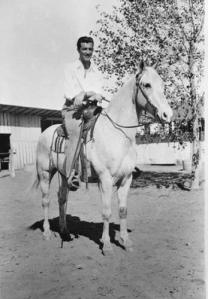 Take his string of horses, for instance.  Bob has a stable and a good one but included amongst the high-pedigreed animals, he has a cow pony which is one of his favorites.  The fancy horses are okay,” he said, but for the long day’s ride, give me those little western ponies every time.”

They tell me that before the Billy the Kid company arrived in Tucson, Arizona, for location, there was much speculation among the wranglers and cowherds who were to work in the picture about what a big “glamour boy” like Taylor would be like.

They were amazed when they found him just a regular, normal guy matter-of-factly doing his job.

Since Billy the Kid is in Technicolor, Bob wore an almost black make-up to simulate sun-and wind burn.  One day Bob was standing outside camera range as they lined up on his stand-in who was seated on the horse.  One of the natives was watching the procedure.  He turned to Bob and asked, proud of his use of the Hollywood vernacular, “Are you that star’s double?” pointing to Bob’s own stand-in.  Bob said he was.  “I thought so.  You’re both dressed just alike.  You both got on the same kind of make-up.”

When everything was set, Bob went into the scene and  put the horse through some pretty 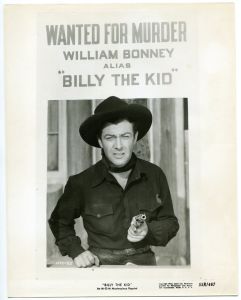 hair-raising stunts.  When it was over, Bob found the visitor still standing by.

“Those were good tricks,” he said.  ‘but doesn’t it sort of make you mad to do that stuff and have another fellow get the credit for it?”

He doesn’t know yet he was talking to Robert Taylor and he will probably be the first to point out the scenes in the picture where the double does the work and the star gets the applause.

But it doesn’t bother Bob.  In fact, nothing much bothers Bob any more–not since he has learned, to re-vamp the Hollywood phrase, “to catch.”  When he first started in pictures, he often heard the favorite slogan of those urging someone to  do his best.  “Get in there and pitch.”  Bob Taylor discovered that more important was to do your share of the catching.  Taylor learned to “catch” his share of barbs and laughs and not get hurt by them. 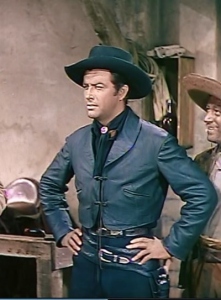 “It used to bother me–the stuff I saw in the papers  about my being a ‘glamour boy,’ and that sort of thing,” he said, “but it doesn’t any more.  And the funny thing is that since it stopped bothering me their attitude seems to have changed.  Maybe it’s like a kid when another kid is teasing him.  If he shows it’s getting under his skin, the tormentor will go right ahead for the pleasure of watching the writhing.  But if the kid just laughs it off, if he knows how to ‘catch,’ in other words, then there’s no fun to the game.

Perhaps it is this that has caused his tormentors to lay off, or, perhaps, which Bob would be much too modest to realize, is that Taylor has grown in stature both as an actor and as a person.  He has matured, he has become an adult.  He is looking at living in a much more serious way.

“I’ve found there’s a lot more in life than just making pictures, getting ahead.” he said to me in the pine-panelled room that  serves as office as well as dressing room for him on the M-G-M lot.  “I think that maybe flying that plane of mine taught me that.  I got to thinking one day, what would I do if I weren’t in pictures any more and then I discovered that the first thing I’d do would be to go in heavily for aviation,–aviation and ranching.

“When we were at Tucson, I went nuts about that Arizona country.  Barbara finished up

her picture and she came down to be with me while I was there.  One night she said something that was like mental telepathy. ‘I’d love a ranch somewhere around here. It’s so lovely.’

“The next day it rained and I was tickled to death we couldn’t work.  So Barbara and I got in the car and started driving.  We both knew what we were doing without saying anything.  We were looking for that ranch.  What’s more, I think we’ve found it.”

I asked him where it was but he wouldn’t tell.  And I knew the reason.  So often  real estate dealers hop up the price when they hear that a film star is interested in a piece of property.  But this much Bob would say:

“I don’t want any dude ranch.  I want the real thing or nothing.  I want an actual cattle ranch–a workable one that will support itself with just as much acreage as I can possibly get and I don’t want it just for a weekend place.  What Barbara and I intend to do is to go to the ranch–and live there while I’m not working.  The time I have between pictures will make that possible.”

Bob and Barbara have always liked doing the same things.  They are both agreed on living the normal life–both like their home, both like to ride horseback.  Both love to drive to the

beach, stopping in at a drive-in for  gooey hamburgers.  The only thing about which they do not agree is airplane travel.  Bob is crazy about flying, bought his own plane  recently, has his flying license after taking instruction from a famous pilot.  But Barbara has a real fear of planes and Bob has never been able to persuade her to go up with him.  He first tried pleading and when that did no good, he resorted to gags.

One day he came home with an enormous box.  “I’ve brought you a present,” he told her.  Eagerly Barbara opened it to discover a neatly folded parachute inside.  This might have won if it had not been for the card that Bob could not resist putting on which read, “It don’t mean a thing if you don’t pull that string.  Happy landing.  Love, Bob.”

Twice she has been to the hanger with him, having given her solemn promise that she would go up with him.  But both times she got cold feet and preferred to remain on firm ground.  However, she knows how great Bob’s interest is in aviation, how much enjoyment he gets out of flying, so she has never tried to stop him.  She even encourages him to fly.  He took his own plane with him to Tucson, by the way, and got in some extra hours in the air.  Barbara had to leave the location before Taylor had finished work, so he flew back.  Barbara went to the airport to meet him and spent a miserable two hours when he was late, due to bad weather.

Another of Bob’s great interests is dogs.  When one of his fine pedigreed Dobermans 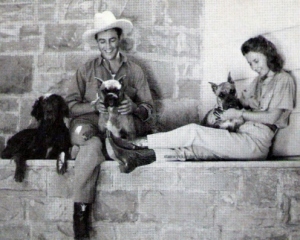 becomes a father, Bob is always given pick of the pups.  He should, of course, sell these but he never can.  He keeps them instead and the house is now overrun with dogs.  Barbara finally did put her foot down about keeping so many and Bob promised that he would put out a “for sale” sign.  But this he discovered he could not do.  Now he gives the new puppies to friends–Chico Marx received one of them–and feels free to call on the dogs when he gets lonesome.

Inevitably we got around to the subject of women.  “The kind of woman I like doesn’t wear too much make-up, doesn’t go in for trick hair-dresses, doesn’t wear crazy hats and looks good in tailored suits.”

You see?  The line of normal living does not waver.  It is the tip-off to the Taylor character.  And, incidentally, have you noticed that Barbara doesn’t wear too much make-up, go in for trick hairdresses or crazy hats, and looks wonderful in tailored suits?

I became a Robert Taylor fan at the age of 15 when his TV show, "The Detectives" premiered. My mother wanted to watch it because she remembered Mr. Taylor from the thirties. I took one look and that was it. I spent the rest of my high school career watching Robert Taylor movies on late night TV, buying photos of him, making scrapbooks and being a typical teenager. College, marriage and career intervened. I remember being sad when Mr. Taylor died. I mailed two huge scrapbooks to Ursula Thiess. I hope she got them. Time passed, retirement, moving to Florida. Then in 2012 my husband Fred pointed that there were two Robert Taylor movies that evening on Turner Classic Movies--"Ivanhoe" and "Quentin Durward." I watched both and it happened all over again. I started this blog both for fans and for people who didn't know about Robert Taylor. As the blog passes 200,000 views I'm delighted that so many people have come by and hope it will help preserve the legacy of this fine actor and equally good man.
View all posts by giraffe44 →
This entry was posted in Biography and tagged 1930s, actor, aviation, Barbara Stanwyck, Billy the Kid, celebrities, dogs, entertainment, flying, Golden Era, horses, MGM, normality, Robert Taylor. Bookmark the permalink.