July is going to be a good month for Robert Taylor films on Turner Classic Movies.  There are 6, including two showings of Party Girl.  The first is The Crowd Roars, made in 1938.  It is showing on Saturday July 7 at 6 a.m. est.  Not closed captioned.  Although I am not a boxing fan, I love this film. 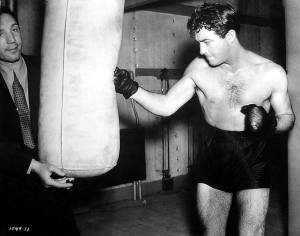 Boxing doesn’t appeal to me, either for real or on screen so I approached The Crowd Roars with some trepidation. However, boxing is only the excuse for a film on the Depression, on corruption, on poverty and crime. Robert Taylor is superb as Tommy “Killer” McCoy, a young man who enters the ring strictly for the money. He has had the wolf at the door and doesn’t want to see it again. His distaste for being a “pug” and his longing for respectability come into play as he meets Maureen O’Sullivan and gets a glimpse of how “the other half” live. The fight scenes are exciting and vivid but not glamorized. A scene in the gym introduces a cast of brain-damaged pugs as Taylor prepares for his first big fight. The cinematography is excellent as is the lighting. There are no bad performances. Frank Morgan is the drunken father, Maureen O’Sullivan is the love interest, Edward Arnold the gangster, Lionel Stander the trainer. Jane Wyman has a small but pivotal role as a southern airhead. Highly recommended.  Review by me for the Imdb.

A break on the set.

I became a Robert Taylor fan at the age of 15 when his TV show, "The Detectives" premiered. My mother wanted to watch it because she remembered Mr. Taylor from the thirties. I took one look and that was it. I spent the rest of my high school career watching Robert Taylor movies on late night TV, buying photos of him, making scrapbooks and being a typical teenager. College, marriage and career intervened. I remember being sad when Mr. Taylor died. I mailed two huge scrapbooks to Ursula Thiess. I hope she got them. Time passed, retirement, moving to Florida. Then in 2012 my husband Fred pointed that there were two Robert Taylor movies that evening on Turner Classic Movies--"Ivanhoe" and "Quentin Durward." I watched both and it happened all over again. I started this blog both for fans and for people who didn't know about Robert Taylor. As the blog passes 200,000 views I'm delighted that so many people have come by and hope it will help preserve the legacy of this fine actor and equally good man.
View all posts by giraffe44 →
This entry was posted in Films and tagged 1930s, actor, boxing, drama, Edward Arnold, entertainment, Frank Morgan, glamor, Golden Era, handsome, hollywood, Jane Wyman, Lionel Stander, Madison Square Garden, matinee idol, Maureen O'Sullivan, MGM, movie stars, nat pendleton, Robert Taylor, romance, TCM, The Crowd Roars, Turner Classic Movies. Bookmark the permalink.