An Emergency Comes to a Mountain Cabin

This is from a 1950s movie magazine. I don’t know which one.  If it’s true, it’s a look into movie making back then. 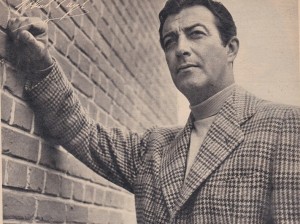 Notified that he’d star in a modern story, Irwin Shaw’s 32nd Day, (it’s about pilots flying between France and North Africa) Bob Taylor was jubilant. “I don’t have to run around in a clanking suit of armor or in buckskin and coonskin hats.” (Taylor clanks in Quentin Durward and wears buckskin in The Last Hunt.) It’s been a jubilant year for Taylor anyway, since he became a father in June, and the father of a son, at that.  (Barbara Stanwyck, his ex-wife, was among the many who wrote to congratulate Bob on this joyous event.)  In August, right after he would up The Last Hunt, Bob set out for Buffalo, Wyoming, with the whole family in tow.  The Taylors have a ranch and a mountain cabin there and Robert figured to play with the new baby and get in some pheasant shooting, too. He, Ursula and the kids had no sooner got settled down in Wyoming, when he got an emergency call from Hollywood.  They needed him to re-record one line of dialogue for Quentin Durward.  Reporter Joe Hyams, discovering that the line of dialogue contained twenty words, and that the trip between Buffalo and Hollywood was 1200 miles, wrote that Bob, upon returning to his vacation lodge, had put in “more than 100 miles of flight for every word he recorded.”  Terrence Taylor, incidentally, the boy born to Bob and Ursula one day before Father’s Day, was a plenty healthy specimen, weighing in at seven pounds, eight ounces, and he’s picked up a-plenty since.  Ursula’s two children by an earlier marriage, Manuela and Michael, adore the baby as much as they adore their new pop, which is quite a lot. MGM promised him a long vacation and his friend Gov. Joe Foss of South Dakota is joining him for pheasant shooting.

Other photos that seem to be from the same shoot: 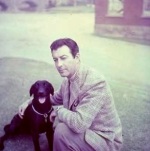 I became a Robert Taylor fan at the age of 15 when his TV show, "The Detectives" premiered. My mother wanted to watch it because she remembered Mr. Taylor from the thirties. I took one look and that was it. I spent the rest of my high school career watching Robert Taylor movies on late night TV, buying photos of him, making scrapbooks and being a typical teenager. College, marriage and career intervened. I remember being sad when Mr. Taylor died. I mailed two huge scrapbooks to Ursula Thiess. I hope she got them. Time passed, retirement, moving to Florida. Then in 2012 my husband Fred pointed that there were two Robert Taylor movies that evening on Turner Classic Movies--"Ivanhoe" and "Quentin Durward." I watched both and it happened all over again. I started this blog both for fans and for people who didn't know about Robert Taylor. As the blog passes 200,000 views I'm delighted that so many people have come by and hope it will help preserve the legacy of this fine actor and equally good man.
View all posts by giraffe44 →
This entry was posted in Biography and tagged actor, Barbara Stanwyck, celebrities, Golden Era, hollywood, MGM, Quentin Durward, Robert Taylor, Terry Taylor, The Last Hunt, Ursula Thiess. Bookmark the permalink.

4 Responses to An Emergency Comes to a Mountain Cabin