Announcer: Hello again, folks, this is Dick Simmons, bringing you, direct from Hollywood, one of the screen’s top stars, whose films for the past few years, have kept him away from the film capitol…It’s a pleasure to introduce Robert Taylor…and we’re lucky to catch him between trips.

Mr. Taylor: Thanks….It’s pleasant to be…between trips…as you say. Though I must admit I enjoy traveling

Announcer: You recently flew back from England, didn’t you, Bob. 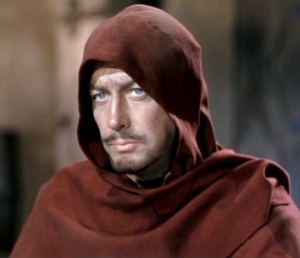 Announcer: And, as I recall, before that you were in Italy for six months. Your slogan must be, join MGM and see the world.

Mr. Taylor: Something like that…I’ve been lucky to be assigned films which are shot on location. Not that I object to the studio, of course, but a change of scenery once in a while breaks the monotony.

Announcer: You’ve certainly had your share of scenery. Where all have you been during the past three or four years?

Mr. Taylor: Well, let me see. First there was Colorado…for Devil’s Doorway. Then to England for Conspirator. After that we went to New Mexico for Ambush. Then to Italy for seven months to make Quo Vadis. The next was Westward the Women,…eleven weeks in Utah…and one in the Mojave desert. That brings us up to date, with Ivanhoe recently finished in England.

Announcer: Quite a record. And this doesn’t include the trips in your own plane.

Mr. Taylor: No. Once in a while – I take off on a fishing or hunting trip.

Mr. Taylor: Yes. It’s quicker and there’s no worrying about time-tables. For example, a little while ago I flew up Durango, Colorado where Jimmy Stewart was making a picture. It took me less than three hours. Regular air line connections take eight to ten hours. Frequently the places I want to go cannot be reached by commercial planes of trains.

Announcer: You must have done a lot of sightseeing.

Mr. Taylor: Unfortunately, when you’re making a picture there’s not much time for sight-seeing. And sometimes the weather can make you mighty miserable. In Italy, for example, I would certainly have appreciated one of MGM’s air-conditioned stages. I know why the old Romans wore those light togas, and were so fond of bathing. 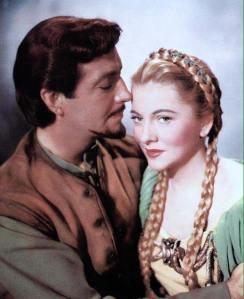 Announcer: Some of the baths they built – I understand are still there.

Mr. Taylor: Yes….and some modern ones, too, thank goodness.

Announcer: How about your English trip. Anything exciting?

Mr. Taylor: It was for me…because of the role…one of the best I’ve had, in my opinion.

Mr. Taylor: That’s right…Dick Thorpe, our director, picked the actual sites described in Ivanhoe,  some magnificent old castles, with their moats, draw-bridges and.…

Mr. Taylor: Yes…with knights in armor, the famous bowmen of early days, all the color and excitement of the medieval times, with jousting, duels.

Mr. Taylor: Yes, jousting. That was a pleasant little pastime they had in those days…Instead of playing golf, two knights in armor, mounted on fast horses, would charge each other at full gallop. They carried long lances…with the business end made of metal. The idea was to knock the other guy off his horse…for keeps. It was thrilling for the spectators – but not conducive to old age.

Announcer: Sounds exciting. But why would they joust?

Announcer: And who are the fair ladies in Ivanhoe? 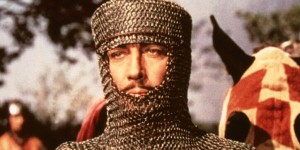 Ready for the Joust.

Announcer: Fair ladies..that’s the understatement of the week.

Mr. Taylor: And with George Sanders as a rival, there’s plenty of action.

Announcer: Seems to me that Quo Vadis and now Ivanhoe, you haven’t been in modern clothes for some time, Bob.

Mr. Taylor: No, but I will soon…in my comfortable leather flying jacket and slacks…for Above and Beyond.

Mr. Taylor: It’s about Colonel Paul Tibbetts and the secret that changed the world. He’s the pilot who dropped the first atom bomb in History…on Hiroshima. 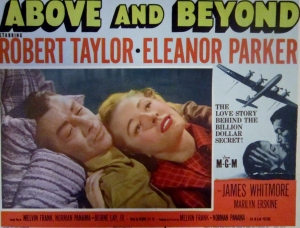 e to explain that Above and Beyond is more than a flying picture. It’s a great and true love story of the romance of Col. Tibbetts and his charming wife.

Announcer: One of my favorite people. 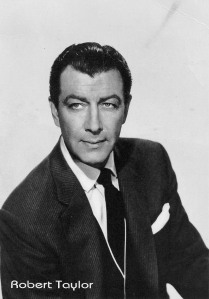 Announcer: Well, Bob, I’m glad MGM has finally given you a role that you can do on a cool sound stage.

Mr. Taylor: Hold it. We start on the sound stage…but finish at Tucson, Arizona.

Announcer: Well, happy landings, Bob. At least we were fortunate enough to catch you between trips.

Mr. Taylor: Adios…I’m off for Mexico for some marlin fishing.

I became a Robert Taylor fan at the age of 15 when his TV show, "The Detectives" premiered. My mother wanted to watch it because she remembered Mr. Taylor from the thirties. I took one look and that was it. I spent the rest of my high school career watching Robert Taylor movies on late night TV, buying photos of him, making scrapbooks and being a typical teenager. College, marriage and career intervened. I remember being sad when Mr. Taylor died. I mailed two huge scrapbooks to Ursula Thiess. I hope she got them. Time passed, retirement, moving to Florida. Then in 2012 my husband Fred pointed that there were two Robert Taylor movies that evening on Turner Classic Movies--"Ivanhoe" and "Quentin Durward." I watched both and it happened all over again. I started this blog both for fans and for people who didn't know about Robert Taylor. As the blog passes 200,000 views I'm delighted that so many people have come by and hope it will help preserve the legacy of this fine actor and equally good man.
View all posts by giraffe44 →
Gallery | This entry was posted in Films and tagged Above and Beyond, celebrities, Dick Simmons, Eleanor Parker, Elizabeth Taylor, entertainment, George Sanders, glamor, Golden Era, hollywood, Ivanhoe, Joan Fontaine, matinee idol, MGM, movie stars, Quo Vadis, Robert Taylor. Bookmark the permalink.

4 Responses to Robert Taylor Radio Interview about Ivanhoe etc., 1952 or 1953