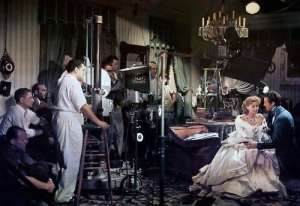 This film further proves that the assembly-line system of Hollywood studios back then should also be taken seriously in terms of artistry. Just because movies were produced run-of-the-mill doesn’t mean that they weren’t paid critical attention to by their makers. The usual impression on studio-era Hollywood is: take a formulaic narrative style, maybe adapt a stage play for the screen, blend in a handful of stars from the stable and the films rake in the profit at the box office. Not quite, that’s the easy perception. George Cukor, another of those versatile directors, made it apparent with Camille that filmmaking as an art may still flourish despite (and even within) certain parameters. Camille is beautiful, in so many respects. And it’s not just because of Greta Garbo.

Sure, the acting is amazing, the casting is perfect. Garbo is luminous, mysterious, cruel, and weak at the same time. Robert Taylor surrenders himself to be the heartbreakingly young and vulnerable Armand. Henry Daniell’s coldness and sadism is utterly human and familiar. The others are just plain wonderful. The writing contains so much wit and humor, devotion and pain – but it never overstates anything. The rapport and tensions between lovers, friends, and enemies are palpable and consistent. The actions flow so naturally, just like every scene, that checking for historical inconsistencies seem far beside the point.

There is so much that I love about Camille that it’s hard to enumerate them all, but with every little discovery comes the realization that this is “but” a studio production, so it makes the experience more exquisite. Camille is a gentle, poignant romantic movie that, like Garbo, takes its place delicately and self-effacingly in the history of American cinema, but makes itself indelible in the heart and mind of the lovelorn individual viewer. Review by tsarevna for the IMDb.

I became a Robert Taylor fan at the age of 15 when his TV show, "The Detectives" premiered. My mother wanted to watch it because she remembered Mr. Taylor from the thirties. I took one look and that was it. I spent the rest of my high school career watching Robert Taylor movies on late night TV, buying photos of him, making scrapbooks and being a typical teenager. College, marriage and career intervened. I remember being sad when Mr. Taylor died. I mailed two huge scrapbooks to Ursula Thiess. I hope she got them. Time passed, retirement, moving to Florida. Then in 2012 my husband Fred pointed that there were two Robert Taylor movies that evening on Turner Classic Movies--"Ivanhoe" and "Quentin Durward." I watched both and it happened all over again. I started this blog both for fans and for people who didn't know about Robert Taylor. As the blog passes 200,000 views I'm delighted that so many people have come by and hope it will help preserve the legacy of this fine actor and equally good man.
View all posts by giraffe44 →
This entry was posted in Films and tagged 1930s, Camille, drama, entertainment, glamor, Golden Era, Greta Garbo, henry daniell, hollywood, Laura Hope Crewes, lionel barrymore, matinee idol, MGM, movie stars, Robert Taylor, romance, Turner Classic Movies. Bookmark the permalink.