The Law and Jake Wade, 1958 Is Playing on Turner Classic Movies on July 13 at 1:45 a.m. est.  Closed captioned.  Note that films playing after midnight actually play on the following day. 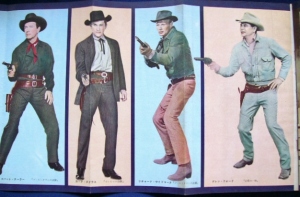 Was there ever a more suitable cowboy than Robert Taylor? I think not! Again Taylor plays the man with a hidden past, as he did in Undercurrent and Conspirator. This time he is a marshal in a small town, who owes his former companion, Clint Hollister, a menacing and dangerous man on the run, played wonderfully well by Richard Widmark. He breaks him out of jail just as Widmark had done for him a year previous. The mistake is that he finds Jake and takes him and his fiancée on a torturous trip to get the money Jake hid from a bank hold-up. Patricia Owens as Peggy, is angry and confused, when she finds out about his past, even though she had told him in the beginning that anything he had done before she  met him was of no interest. There is plenty of action in this western, and the scenery is glorious. Good against evil, or bad ethics on Taylor’s part. You may wonder, what was he thinking? Supporting cast is great with Henry Silva in an early role, which shows you are great actor in the making. Old standards are Robert Middleton, who made many films with Taylor, and DeForest Kelley who went on to television fame in Star Trek. Taylor plays his part with quiet reserve, as the opposite of Widmark’s hostile and outwardly evil character. If Taylor had done any- thing else with the part the story would not have seemed as credible. I don’t think that Robert Taylor ever got enough credit for being an actor who could be anyone for anybody. Every man, a common man, therefore playing good guy or bad guy, he was always believable. Watch it, you will not be disappointed. Review by mamalv for the IMDb.

Here are some wardrobe shots from The Law and Jake Wade

I became a Robert Taylor fan at the age of 15 when his TV show, "The Detectives" premiered. My mother wanted to watch it because she remembered Mr. Taylor from the thirties. I took one look and that was it. I spent the rest of my high school career watching Robert Taylor movies on late night TV, buying photos of him, making scrapbooks and being a typical teenager. College, marriage and career intervened. I remember being sad when Mr. Taylor died. I mailed two huge scrapbooks to Ursula Thiess. I hope she got them. Time passed, retirement, moving to Florida. Then in 2012 my husband Fred pointed that there were two Robert Taylor movies that evening on Turner Classic Movies--"Ivanhoe" and "Quentin Durward." I watched both and it happened all over again. I started this blog both for fans and for people who didn't know about Robert Taylor. As the blog passes 200,000 views I'm delighted that so many people have come by and hope it will help preserve the legacy of this fine actor and equally good man.
View all posts by giraffe44 →
This entry was posted in Films and tagged acting, actor, celebrities, DeForest Kelly, drama, entertainment, glamor, Golden Era, hollywood, john sturges, matinee idol, MGM, movie stars, Patricia Owens, Richard Widmark, Robert Middleton, Robert Taylor, TCM, The Law and Jake Wade, Turner Classic Movies, Western. Bookmark the permalink.