West Point of the Air, 1935, is playing on Turner Classic Movies on Tuesday, May 17 at 12 noon. est.  Closed captioned.  This is one of Robert Taylor’s earliest films and he has a very small part.  However, any Taylor purist should see this. 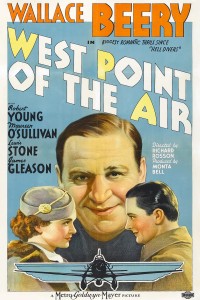 Wallace Beery and Lewis Stone have both risen as far as they can in the Army, Stone’s a general and Beery a top sergeant. Since Stone has a daughter who grows up to be Maureen O’Sullivan and girls did not aspire to such strictly male things as a military career back in the day, both old guys hope that Robert Young who is Beery’s son succeeds.

Young as Beery’s son gets a legacy appointment to West Point in West Point of the Air and upon graduation joins the Army Air Corps. Can he measure up is the burning question.

Wallace Beery adds to his repertoire of scene stealing old codgers again in this film. Imagine Judge Hardy in the military and you’ve got Lewis Stone’s performance. Between the two of them they make West Point of the Air passably good entertainment.

Though Robert Young and Maureen O’Sullivan are the two young leads, MGM was giving some exposure to two of its younger contract players who went on to have bigger careers than the leads. Rosalind Russell plays the typical bad girl divorcée who seduces Young and move him from the straight and narrow path of duty. She’s good, but no trace of the sparkling Roz of The Women or His Girl Friday.

And Robert Taylor has a small role as another of the young flying cadets with Young. One look at him and you knew that man was going to be a star and he has a death scene that I’m sure made a lot in the audience write to MGM and ask who this handsome devil was.

West Point of the Air was nice, but nothing terribly special except as a training ground for future stars. Review by bkognbing from Buffalo, NY.

I became a Robert Taylor fan at the age of 15 when his TV show, "The Detectives" premiered. My mother wanted to watch it because she remembered Mr. Taylor from the thirties. I took one look and that was it. I spent the rest of my high school career watching Robert Taylor movies on late night TV, buying photos of him, making scrapbooks and being a typical teenager. College, marriage and career intervened. I remember being sad when Mr. Taylor died. I mailed two huge scrapbooks to Ursula Thiess. I hope she got them. Time passed, retirement, moving to Florida. Then in 2012 my husband Fred pointed that there were two Robert Taylor movies that evening on Turner Classic Movies--"Ivanhoe" and "Quentin Durward." I watched both and it happened all over again. I started this blog both for fans and for people who didn't know about Robert Taylor. As the blog passes 200,000 views I'm delighted that so many people have come by and hope it will help preserve the legacy of this fine actor and equally good man.
View all posts by giraffe44 →
This entry was posted in Films and tagged 1930s, acting, actor, celebrities, drama, entertainment, glamor, Golden Era, hollywood, matinee idol, Maureeen O'Sullivan, movie stars, Robert Young, Rosalind Russell, Wallace Beery, walter brennan, West Point of the Air. Bookmark the permalink.