Valley of the Kings, 1954 and Lady of the Tropics, 1939 are now available on DVD from WB Shop and other retailers. Prices vary.

Valley is a swashbuckler set in 1900.  It is about Mark Brandon,  the archaeologist who inspired Indiana Jones.  Eleanor Parker and Carlos Thompson co-star.  It is huge fun and beautifully photographed.

Lady is an odd film set in Viet Nam in the 1930s. Serial houseguest  Robert Taylor falls in love with Hedy Lamarr, a mixed race beauty. His acceptance of her as she is is pretty enlightened as everyone else thinks he’s nuts. It’s not the most believable film but it is visually great and entertaining. 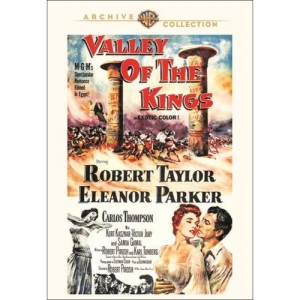 I became a Robert Taylor fan at the age of 15 when his TV show, "The Detectives" premiered. My mother wanted to watch it because she remembered Mr. Taylor from the thirties. I took one look and that was it. I spent the rest of my high school career watching Robert Taylor movies on late night TV, buying photos of him, making scrapbooks and being a typical teenager. College, marriage and career intervened. I remember being sad when Mr. Taylor died. I mailed two huge scrapbooks to Ursula Thiess. I hope she got them. Time passed, retirement, moving to Florida. Then in 2012 my husband Fred pointed that there were two Robert Taylor movies that evening on Turner Classic Movies--"Ivanhoe" and "Quentin Durward." I watched both and it happened all over again. I started this blog both for fans and for people who didn't know about Robert Taylor. As the blog passes 200,000 views I'm delighted that so many people have come by and hope it will help preserve the legacy of this fine actor and equally good man.
View all posts by giraffe44 →
This entry was posted in Films and tagged Carlos Thompson, drama, DVD, Eleanor Parker, entertainment, Golden Era, Hedy Lamarr, hollywood, Indiana Jones, Lady of the Tropics, mark brandon, movie stars, Robert Pirosh, Robert Taylor, Valley of the Kings. Bookmark the permalink.