Most of this article strikes me as fanciful but it’s fun to read and indicative of how celebrity “news” was written in 1940.

From Movie World, Australia 3/23/40
from Christine Webb, in Hollywood

Mrs. Robert Taylor in private and public life. Here, sprinting down the Valley road to their ranch with Bob Taylor.

Difficult to believe that this lovely, demure young thing is thirty-three years of age.  It is the latest studio portrait of Barbara Stanwyck.

It is ten months since a shiny-eyed Barbara Stanwyck, with a platinum circlet on the third finger of her left hand, returned to Hollywood and ordered the name-plate over her dressing room door to be changed to “Mrs. Robert Taylor.”

I have just seen the premiere of her new film, Remember the Night.  The Barbara who gleamed from the screen in a variety of exotic  frocks was new to me.  She seemed incredibly young.

She has never looked lovelier. She herself will tell you that she has never been so happy. What has Barbara been doing since her marriage?  She and Bob spend all the time they can get together at their ranch in the San Fernando Valley. 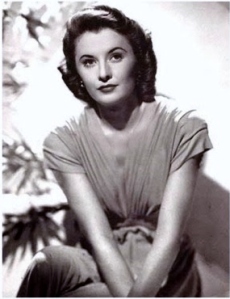 Here,glamor girl plus in a scene from Paramount’s “Remember the Night.”

There you wouldn’t feel comfortable unless you came dressed to romp with the dogs, go riding in the hills, or walking through the alfalfa which Bob has under cultivation.  Bob and Barbara are deeply interested in each other’s career, but they never interfere.

Bob broke this unwritten rule only once–during the filming of Remember the Night. He objected to the “undress” scenes in which his wife appeared, and some of the love scenes,  which he considered unnecessarily prolonged.

Barbara is proudly wearing a diamond-crusted bracelet around her slender wrist–a recent birthday present from Bob.  They are planning a quiet little tete-a-tete at home on May 14–their first wedding anniversary.

I became a Robert Taylor fan at the age of 15 when his TV show, "The Detectives" premiered. My mother wanted to watch it because she remembered Mr. Taylor from the thirties. I took one look and that was it. I spent the rest of my high school career watching Robert Taylor movies on late night TV, buying photos of him, making scrapbooks and being a typical teenager. College, marriage and career intervened. I remember being sad when Mr. Taylor died. I mailed two huge scrapbooks to Ursula Thiess. I hope she got them. Time passed, retirement, moving to Florida. Then in 2012 my husband Fred pointed that there were two Robert Taylor movies that evening on Turner Classic Movies--"Ivanhoe" and "Quentin Durward." I watched both and it happened all over again. I started this blog both for fans and for people who didn't know about Robert Taylor. As the blog passes 200,000 views I'm delighted that so many people have come by and hope it will help preserve the legacy of this fine actor and equally good man.
View all posts by giraffe44 →
This entry was posted in Biography and tagged 1930s, acting, Barbara Stanwyck, celebrities, entertainment, glamor, Golden Era, hollywood, marriage, movie stars, Remember the Night, Robert Taylor, romance. Bookmark the permalink.