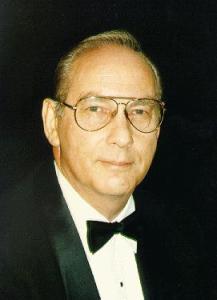 I only knew Ralph Moratz online. He was very gracious about answering questions and we corresponded about his experiences with Robert Taylor and his opinion of Mr. Taylor. Ralph Moratz died on March 10, 2016 at the age of 84.  Please note that none of this is used by permission but I don’t think Mr. Moratz would mind.

Ralph Moratz was born to a Jewish family in Germany on October 10, 1931. During the Holcaust he suffered tremendously. For details go to his page at the Internet Movie Database. In 1941 he was able to escape to America and lived in New York. After graduation from Flushing High School, Ralph enlisted in the US Air Force for a four year stint. He joining Central Casting and the Screen Extras Guild in Nov 1953 and was subsequently  booked on over 2,000 extra days. He also had several bit parts. Mr. Moratz became a member of the Screen Actors Guild in 1955 and AFTRA in the 1980s. Ralph took a 30 year hiatus to become a programmer, programmer analyst, and Application Manager of Payroll and Consumer Loans at a Major bank in Los Angeles. After retirement Ralph returned to background acting. Most of his extra work was done in the fifties, including several appearances on Robert Taylor’s Detectives.  (Adapted from the IMDb entry Ralph Moratz)

The following text is from Ralph Moratz’ wonderful web site In Another Time, he Universe of Ralph M.

“In the late 1950s, after the Black Saddle series wrapped for good, I was able to secure a new stand-in position on the Robert Taylor Detective series. In fact, strangely, I stood in for Robert Taylor for nearly two years. I say strangely since I had no resemblance to Robert Taylor neither in features, hair color, nor height. Nor was I related to anyone on the show. 🙂 It was more 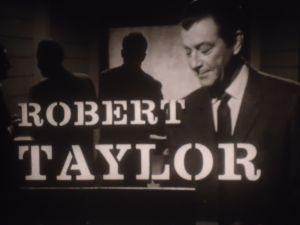 a case of having proven myself as an attentive and reliable stand-in on the Black Saddle series and both were produced by Four Star Productions (This is the company that took over the old Republic Studios. Rifleman, The Big Valley, Wanted Dead Or Alive and many other shows were in production at the same time under the Four Star banner.)

“Moreover, as I soon discovered, Robert Taylor was such a huge screen star that any production he was involved with always had the best of technicians in all categories. The camera men and lighting guys were so good that often I was only called into the set for a few brief minutes for the camera to set the shot and the lighting paraphernalia adjustments applied. 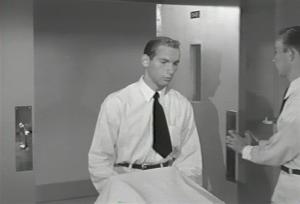 Ralph Moratz pushing a stretcher in “Not as a Stranger, 1955”

“I’m often asked what was Bob like or what was it like to work with him. As huge as he was on the screen, on the set his presence was equally imposing. An aura of self-assurance and kindness coupled with incredible stage presence and talent is one recollection. Idiosyncrasies or signs of greatness; he almost always bought his lunch in a paper bag, rarely leaving the environment of the set and his dressing room from the time he appeared in the morning until he was wrapped for the day; he went out of his way to relax any day player who showed signs of nervousness or stage fright bought on by working with him; 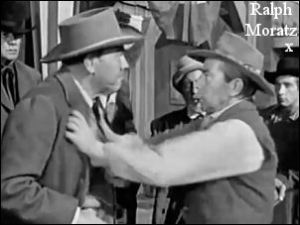 extremely courteous to all (even me) around him; his normal speaking voice was identical to the sound you hear on the screen; often making slight script adjustment suggestions to the director but never making a demand. Unlike other big stars I worked with, Bob never lost his cool or showed any signs of anger. I think only Gary Cooper had those same qualities.”

Ralph Moratz is second from right in the back. Robert Taylor and Robert Gist are in the foreground. D-Day the Sixth of June, 1956.

“Long before I stood in for Robert Taylor, I was booked on D-Day 6th Of June and worked in a scene with Bob: 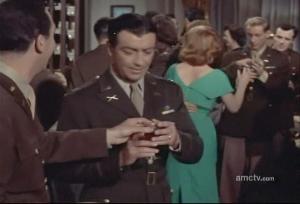 Mr. Moratz is handing a woman a drink in the right background. Robert Taylor is being handed a drink in the foreground.  D-Day the Sixth of June, 1956.

I became a Robert Taylor fan at the age of 15 when his TV show, "The Detectives" premiered. My mother wanted to watch it because she remembered Mr. Taylor from the thirties. I took one look and that was it. I spent the rest of my high school career watching Robert Taylor movies on late night TV, buying photos of him, making scrapbooks and being a typical teenager. College, marriage and career intervened. I remember being sad when Mr. Taylor died. I mailed two huge scrapbooks to Ursula Thiess. I hope she got them. Time passed, retirement, moving to Florida. Then in 2012 my husband Fred pointed that there were two Robert Taylor movies that evening on Turner Classic Movies--"Ivanhoe" and "Quentin Durward." I watched both and it happened all over again. I started this blog both for fans and for people who didn't know about Robert Taylor. As the blog passes 200,000 views I'm delighted that so many people have come by and hope it will help preserve the legacy of this fine actor and equally good man.
View all posts by giraffe44 →
This entry was posted in Biography and tagged acting, actor, AFTRA, Around the World in 80 Days, celebrities, extra, Golden Era, hollywood, MGM, movie stars, Not As a Stranger, Ralph Moratz, Robert Taylor, SAG, SEG, The Detectives, The Rifleman. Bookmark the permalink.