This isn’t really a Robert Taylor movie but his cameo was one of his last screen appearances. There is a wonderful bit where Mr. Taylor meets a bus full of young ladies and one of them falls in a faint. He had a problem with that in real life. 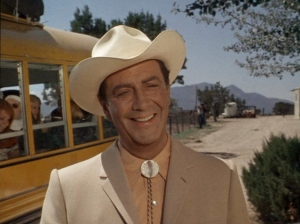 In this follow-up to The Trouble with Angels, the wry but wise Mother Superior of St. Francis Academy For Girls accompanies a group of nuns including modern, progressive Sister George, with their high-spirited students on a bus trip across America to a California peace rally. Along the way, they encounter a series of adventures that include multiple bus problems, an overnight stay at a Catholic school for boys run by Father Chase, a Western dude ranch owned by millionaire Mr. Farriday (Robert Taylor), a flamboyant movie director shooting a Western on location, and a bunch of menacing biker toughs. Written by alfiehitchie for the IMDb.

I became a Robert Taylor fan at the age of 15 when his TV show, "The Detectives" premiered. My mother wanted to watch it because she remembered Mr. Taylor from the thirties. I took one look and that was it. I spent the rest of my high school career watching Robert Taylor movies on late night TV, buying photos of him, making scrapbooks and being a typical teenager. College, marriage and career intervened. I remember being sad when Mr. Taylor died. I mailed two huge scrapbooks to Ursula Thiess. I hope she got them. Time passed, retirement, moving to Florida. Then in 2012 my husband Fred pointed that there were two Robert Taylor movies that evening on Turner Classic Movies--"Ivanhoe" and "Quentin Durward." I watched both and it happened all over again. I started this blog both for fans and for people who didn't know about Robert Taylor. As the blog passes 200,000 views I'm delighted that so many people have come by and hope it will help preserve the legacy of this fine actor and equally good man.
View all posts by giraffe44 →
This entry was posted in Films and tagged 1960s, acting, actor, Arthur Godfrey, bus, celebrities, comedy, entertainment, handsome, hollywood, James, Milton Berle, music, nuns, peace rally, rally, Robert Taylor, Susan St, TCM, The Trouble with Angels, transportation, Trouble Follows, trouble with angels, Turner Classic Movies, Van Johnson. Bookmark the permalink.