Stanwyck and Taylor at the 21st Academy Awards Ceremony in 1949

The twenty first Academy Awards ceremony was held on March 24, 1949 at the Academy Theater in 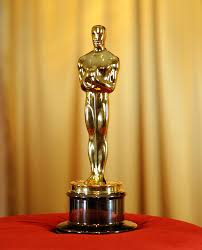 Hollywood.  Robert Montgomery was the host.  The nominees for Best Actress in a Leading Role were Jane Wyman in Johnny Belinda, Ingrid Bergman in Joan of Arc, Olivia de Havilland in The Snake Pit, Irene Dunne in I Remember Mama and Barbara Stanwyck in Sorry, Wrong Number.

It was Barbara Stanwyck’s fourth nomination and her fourth disappointment. Although her performance in Sorry, Wrong   Number was outstanding and the film one of her best, the Academy preferred Jane Wyman in Johnny Belinda.

The photos below were taken before the ceremony and Ms.Stanwyck looks nervous and excited.  She was accompanied, of course, by her husband Robert Taylor.  Barbara Stanwyck looked glamorous and every inch the movie star in her elegant gown and fur jacket while  Mr. Taylor looked sophisticated and suave in his tuxedo. 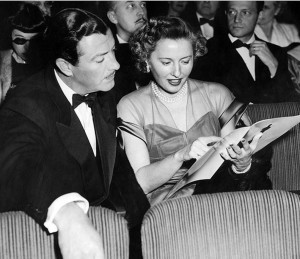 Left to right: arriving on the red carpet; checking out the program. 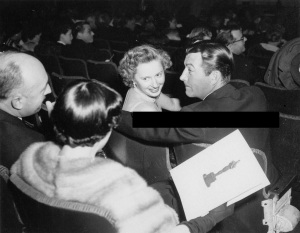 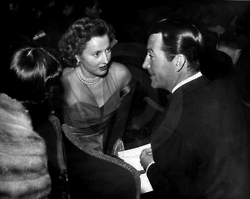 Left to right: chatting with Edith Head and her companion. 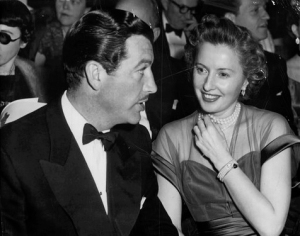 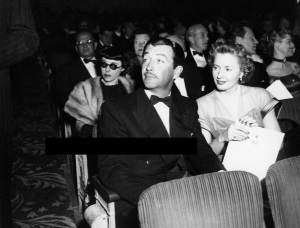 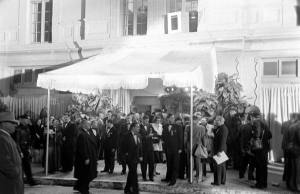 Waiting for the stars to arrive.

No model was used during the design process of the Oscar statuette. Sculptor George Stanley  modeled Cedric Gibbons’s design in clay and Sachin Smith cast the statuette in 92.5 percent tin and 7.5 percent copper and then gold-plated it. The only addition to the Oscar since it was created is a minor streamlining of the base.  (Adapted from Wikipedia)

I became a Robert Taylor fan at the age of 15 when his TV show, "The Detectives" premiered. My mother wanted to watch it because she remembered Mr. Taylor from the thirties. I took one look and that was it. I spent the rest of my high school career watching Robert Taylor movies on late night TV, buying photos of him, making scrapbooks and being a typical teenager. College, marriage and career intervened. I remember being sad when Mr. Taylor died. I mailed two huge scrapbooks to Ursula Thiess. I hope she got them. Time passed, retirement, moving to Florida. Then in 2012 my husband Fred pointed that there were two Robert Taylor movies that evening on Turner Classic Movies--"Ivanhoe" and "Quentin Durward." I watched both and it happened all over again. I started this blog both for fans and for people who didn't know about Robert Taylor. As the blog passes 200,000 views I'm delighted that so many people have come by and hope it will help preserve the legacy of this fine actor and equally good man.
View all posts by giraffe44 →
This entry was posted in Biography and tagged 1949, Academy Awards, acting, Barbara Stanwyck, celebrities, entertainment, glamor, hollywood, Ingrid Bergman, Irene Dunne, Jane Wyman, Johnny Belinda, movie stars, Olivia de Havilland, oscars, Robert Montgomery, Robert Taylor, Sorry Wrong Number, The twenty first Academy Awards ceremony. Bookmark the permalink.