Posted on June 1, 2015 by giraffe44
One of my Robert Taylor friends passed this along.  Many thanks: 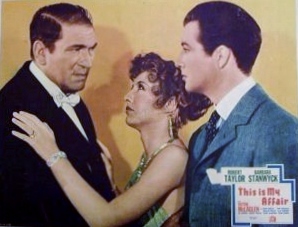 Here’s an upcoming Taylor film on the Fox Movie Channel (instead of  the usual TCM) on Wednesday, June 3, at 8:30 a.m Eastern time.
This Is My Affair – 1937 – starring Robert Taylor & Barbara Stanwyck.  A rather deceptive title capitalizing on their real-life romance.  He plays a naval officer working undercover on orders from President McKinley to infiltrate a gang of highly successful bank robbers, one of whom is Stanwyck’s stepbrother (Brian Donlevy), another who considers her his girlfriend (the always over-the-top Victor McLaglen). Entertaining &, on first viewing, suspenseful historical fiction.
This, of course, is one of the 3 movies Taylor & Stanwyck made together.  In the first film, “His Brother’s Wife,” she got first billing.  He got first billing in the other 2, including “The Night Walker.”  Jane Ellen Wayne & Lawrence J. Quirk gave her first billing for “The Night Walker” in their listings of Taylor films, but he was billed before her in the print ads & in the actual movie.  Awful movie, I thought, which both stars did only for the money.  He was quoted as saying she would get (via alimony) every cent he was paid for the film.

I became a Robert Taylor fan at the age of 15 when his TV show, "The Detectives" premiered. My mother wanted to watch it because she remembered Mr. Taylor from the thirties. I took one look and that was it. I spent the rest of my high school career watching Robert Taylor movies on late night TV, buying photos of him, making scrapbooks and being a typical teenager. College, marriage and career intervened. I remember being sad when Mr. Taylor died. I mailed two huge scrapbooks to Ursula Thiess. I hope she got them. Time passed, retirement, moving to Florida. Then in 2012 my husband Fred pointed that there were two Robert Taylor movies that evening on Turner Classic Movies--"Ivanhoe" and "Quentin Durward." I watched both and it happened all over again. I started this blog both for fans and for people who didn't know about Robert Taylor. As the blog passes 200,000 views I'm delighted that so many people have come by and hope it will help preserve the legacy of this fine actor and equally good man.
View all posts by giraffe44 →
This entry was posted in Films and tagged 1930s, acting, actor, Barbara Stanwyck, Brian Donlevy, celebrities, drama, entertainment, evening clothes, gentleman, glamor, Golden Era, handsome, hollywood, matinee idol, MGM, movie stars, Robert Taylor, romance, This Is My Affair; Victor McLaglen. Bookmark the permalink.