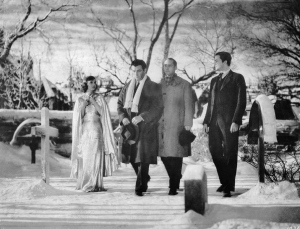 New York Times Review (summary):  Based on a novel by Erich Maria Remarque, Three Comrades represented one of the few successful screenwriting efforts of  F. Scott Fitzgerald. Set  in Germany in the years just following World War I, the film stars Robert Taylor, Franchot Tone and Robert Young as three battle-weary, thoroughly disillusioned returning soldiers. The three friends pool their savings and open an auto-repair shop, and it is this that brings them in contact with wealthy motorist Lionel Atwill–and with Atwill’s lovely travelling companion Margaret Sullavan.  Taylor begins a romance with Sullavan, who soon joins the three comrades, making the group a jovial, fun-seeking foursome Though Sullavan suffers from tuberculosis (her shady past is only alluded to), she is encouraged by her male companions to fully enjoy what is left of her life. This becomes increasingly difficult when one of the comrades, Young, is killed during a political riot (it’s a Nazi riot, though not so-labelled by ever-careful MGM). In the end, the four comrades are only two in number, with nothing but memories to see them through the cataclysmic years to come. Despite its Hollywoodized bowdlerization of the Remarque original, Three Comrades remains a poignant, haunting experience. ~ Hal Erickson, Rovi

I became a Robert Taylor fan at the age of 15 when his TV show, "The Detectives" premiered. My mother wanted to watch it because she remembered Mr. Taylor from the thirties. I took one look and that was it. I spent the rest of my high school career watching Robert Taylor movies on late night TV, buying photos of him, making scrapbooks and being a typical teenager. College, marriage and career intervened. I remember being sad when Mr. Taylor died. I mailed two huge scrapbooks to Ursula Thiess. I hope she got them. Time passed, retirement, moving to Florida. Then in 2012 my husband Fred pointed that there were two Robert Taylor movies that evening on Turner Classic Movies--"Ivanhoe" and "Quentin Durward." I watched both and it happened all over again. I started this blog both for fans and for people who didn't know about Robert Taylor. As the blog passes 200,000 views I'm delighted that so many people have come by and hope it will help preserve the legacy of this fine actor and equally good man.
View all posts by giraffe44 →
This entry was posted in Uncategorized and tagged 1930s, acting, actor, celebrities, drama, entertainment, Erich Maria Remarque, evening clothes, F. Scott Fitzgerald, Franchot Tone, friends, gentleman, Germany, glamor, Golden Era, handsome, hollywood, Margaret Sullavan, matinee idol, MGM, movie stars, Robert Taylor, Robert Young, romance, TCM, Three Comrades, Turner Classic Movies. Bookmark the permalink.