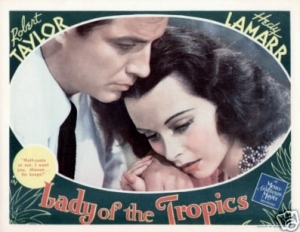 For those who don’t realize it the Lady of the Tropics we’re referring to is Hedy Lamarr who falls big time for visiting playboy Robert Taylor in Saigon. Of course one look at Hedy Lamarr and his romantic goose is cooked as well. But there’s is a forbidden love and sad to say the message in Ben Hecht’s screenplay is stick to your own kind.

Lady of the Tropics was shot while Hedy Lamarr was on hiatus from the ill-fated I Take This Woman. Louis B. Mayer nor any of the other movie moguls believed in letting their players sit idly by. So Lady of the Tropics became Lamarr’s second film and her only pairing with that other screen beauty Robert Taylor.

Taylor plays a very honorable character here or at least more honorable than most. He’s part of a visiting party of tourists off a yacht that lands in Saigon right before World War II starts. As we well know Vietnam was then under that colonial umbrella known as French Indo-China and Saigon was its capital. Among others Taylor is with is his American fiancé Gloria Franklin.

Of course the romantic sparks start the second that Lamarr and Taylor catch sight of each other in that Saigon café. Taylor does an unheard of thing, he breaks it off with Franklin and weds Lamarr post haste.

Sad to say, but implicit is the message that what you do with exotic beauties not 100% Caucasian is bed them don’t wed them. But Taylor and Lamarr don’t see it that way. As was said by Queen Latifah in the recent Hairspray, they’re in for a whole world of stupid.

This was 1939 not 1967 in America. We still had miscegenation laws in most states at the time so the message of sticking to your own kind was in keeping with 1939 mores. This is the exact opposite message the screen would give in 1967 in Guess Who’s Coming To Dinner.

Taylor and Lamarr are stunning, no two ways about that. The sets showing tropical Saigon are great and the film did get an Oscar nomination for cinematography. But the story is both melodramatic and thank God, dated. Review by BKoganbing, Buffalo, New York,  for the IMDb.

I became a Robert Taylor fan at the age of 15 when his TV show, "The Detectives" premiered. My mother wanted to watch it because she remembered Mr. Taylor from the thirties. I took one look and that was it. I spent the rest of my high school career watching Robert Taylor movies on late night TV, buying photos of him, making scrapbooks and being a typical teenager. College, marriage and career intervened. I remember being sad when Mr. Taylor died. I mailed two huge scrapbooks to Ursula Thiess. I hope she got them. Time passed, retirement, moving to Florida. Then in 2012 my husband Fred pointed that there were two Robert Taylor movies that evening on Turner Classic Movies--"Ivanhoe" and "Quentin Durward." I watched both and it happened all over again. I started this blog both for fans and for people who didn't know about Robert Taylor. As the blog passes 200,000 views I'm delighted that so many people have come by and hope it will help preserve the legacy of this fine actor and equally good man.
View all posts by giraffe44 →
This entry was posted in Films and tagged 1930s, acting, actor, adventure, celebrities, drama, entertainment, evening clothes, gentleman, glamor, Golden Era, handsome, Hedy Lamarr, hollywood, Lady of the Tropics, matinee idol, MGM, movie stars, Robert Taylor, romance, Saigon, TCM, Turner Classic Movies. Bookmark the permalink.