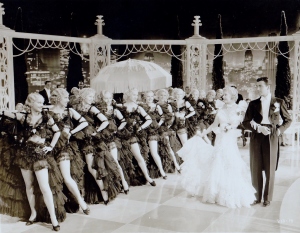 “Broadway Melody of 1936” is a confection of a movie, meant to sweeten the lives of Depression weary Americans. It stars the unlikely triumvirate of Jack Benny, Eleanor Powell and Robert Taylor. The plot is flimsy, involving the parallel efforts of a columnist (Benny) trying to save his career, a Broadway producer (Taylor) trying to find a star for his new show and a dancer (Powell) trying to get her big break on Broadway.

All this is secondary to the wonderful songs by Nacio Herb Brown and Arthur Freed: “I’ve Got a Feelin’ You’re Foolin'”; “Broadway Rhythm”; “You Are My Lucky Star”; “On a Sunday Afternoon”;” Sing Before Breakfast.” The production numbers for each song range from clever to spectacular. “I’ve Got a Feelin’ You’re Foolin” is sung by Taylor and New York actress June Knight. The special effects are a delight, especially as they are done so long before CGI.

Powell proves, as always, that she is unmatched as a dancer—her energy, grace and strength are a marvel. She dances solo, with Buddy and Vilma Ebsen, with Nick Long, Jr. and with huge choruses.

Nor can the acting be faulted. Jack Benny is excellent as the gossip-obsessed wise-cracking and scheming columnist. Robert Taylor is remarkably poised and mature for his years (24) and even has a nice singing voice. The second banana roles are filled admirably by Sid Silvers and Una Merkel. If Powell and Knight are less impressive when their feet are still, it doesn’t matter—their dancing more than redeems them.

“Broadway Melody of 1936” was a high budget, high gloss, pull out all the stops, MGM production. No expense was spared for the costumes, sets, choreography or photography. The direction by Roy del Ruth is crisp and effective. We could use more films like this in our own economically challenged times. Review by me for the IMDb. 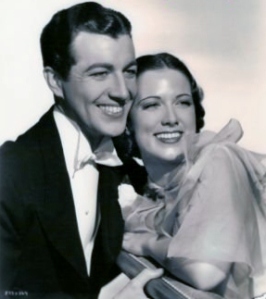 Robert Taylor and Eleanor Powell in “Broadway Melody of 1938”

Broadway Melody of 1938 is one of those pure escapist type films that folks in the Thirties paid their money to see. It’s a nice film combining both a backstage and a racetrack story with one of the most eclectic casts ever assembled for a film.

What can you say when you’ve got dancing covered by Eleanor Powell, George Murphy and Buddy Ebsen, the varied singing styles of Judy Garland, Sophie Tucker, and Igor Gorin and such incredible character actors as Raymond Walburn, Charley Grapewin, Billy Gilbert, and Robert Benchley. All of them such great performers and such vivid personalities there’s no way that the film could be bad.

Almost lost in the shuffle are Robert Taylor and Binnie Barnes who don’t sing or dance and aren’t colorful. But Binnie Barnes is one fine actress and she’s the villain of the piece as Raymond Walburn’s wife who was once part of the chorus, but wants not to be reminded of from where she came. She’s jealous of Eleanor Powell and has a thing for Taylor.

As did half the young women in America in 1937. Though the part doesn’t call for any kind of real acting, Robert Taylor shows every bit as to why he was such a screen heart throb that year. He’s the nice guy producer/director who gets caught in a crunch between his financial backer Raymond Walburn and his wife and the girl of his dreams, Eleanor Powell. Walburn is in the role that Guy Kibbee had in 42nd Street and he does it well with his own avuncular touches.

Powell is not just an ambitious hoofer as are Ebsen and Murphy. She’s also the owner of race horse upon whose performance everyone’s future eventually rides. Just how the racetrack and backstage are woven into the same plot you have to see the film for.

Vocal highlights are provided by Judy Garland who sings her famous Dear Mr. Gable version of that old Al Jolson song, You Made Me Love You. She also sings Everybody Sing which is a number I personally like a whole lot better. Honest Indian.

Sophie Tucker is her mother who owns and operates a theatrical boarding house where half the cast lives. She’s an old trooper herself and of course she gets to sing her famous theme, Some of These Days.

Other material that the MGM songwriting team of Arthur Freed and Nacio Herb Brown did not provide for this film are a couple operatic arias sung by the great concert singer Igor Gorin. He sings Largo Al Factotum from The Barber of Seville and the Toreador Song from Carmen. I’d venture a guess that Louis B. Mayer signed Gorin for this as an effort to keep his other two singers Nelson Eddy and Allan Jones in line. In fact Eddy and Mayer did not get along and Jones would be leaving MGM the following year. Gorin is in fine voice, but did not have much screen presence and has very few spoken lines. I don’t think that was an accident.

Broadway Melody of 1938 is one of MGM’s best musicals from the Thirties and how can you not like a film with as much talent as this one is loaded with?  Review by bkoganbing from Buffalo, NY for the IMDb.

I became a Robert Taylor fan at the age of 15 when his TV show, "The Detectives" premiered. My mother wanted to watch it because she remembered Mr. Taylor from the thirties. I took one look and that was it. I spent the rest of my high school career watching Robert Taylor movies on late night TV, buying photos of him, making scrapbooks and being a typical teenager. College, marriage and career intervened. I remember being sad when Mr. Taylor died. I mailed two huge scrapbooks to Ursula Thiess. I hope she got them. Time passed, retirement, moving to Florida. Then in 2012 my husband Fred pointed that there were two Robert Taylor movies that evening on Turner Classic Movies--"Ivanhoe" and "Quentin Durward." I watched both and it happened all over again. I started this blog both for fans and for people who didn't know about Robert Taylor. As the blog passes 200,000 views I'm delighted that so many people have come by and hope it will help preserve the legacy of this fine actor and equally good man.
View all posts by giraffe44 →
This entry was posted in Uncategorized and tagged 1930s, acting, actor, Broadway Melody of 1936, Broadway Melody of 1938, Buddy Ebsen, celebrities, Eleanor Powell, entertainment, evening clothes, gentleman, glamor, Golden Era, handsome, hollywood, Igor Gorin, Jack Benny, June Knight, matinee idol, MGM, movie stars, nacio herb brown, Raymond Walburn, Robert Taylor, romance, TCM, Turner Classic Movies. Bookmark the permalink.