“The MGM Story”– a Terrific Book 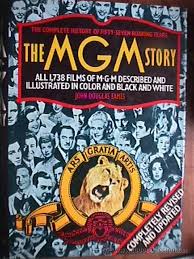 I just bought a book called The MGM Story: the Complete History of Fifty Roaring Years.  It is by John Douglas Eames, published by Crown Publishers Inc, New York, 1975. The subtitle is: All 1713 films of MGM described and illustrated in color and black and white.  If you love the history of the movies, get this book.  I got mine on Amazon and only paid $0.25 (Plus shipping).

Because of my emphasis on Robert Taylor, I started checking references to him in this book.  To my delight, Mr. Eames’ treatment of Mr.Taylor is fair and objective. There is none of the PC left-wing nonsense about Robert Taylor that infects so many Hollywood books.

The following are excerpts some of the reviews of Robert Taylor movies in The MGM Story: 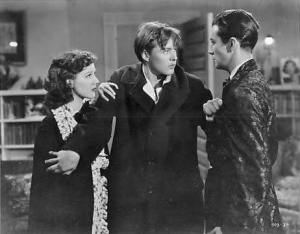 A Wicked Woman, 1934. Jean Parker, Charles Bickford and Mady Christians in A Wicked Woman.  Eleventh in the cast list was Robert Taylor, an MGM discovery making his feature debut there after a highly praised short, Buried Loot, and a minor loan out. Miss Christians, a Viennese charmer, played the title role in this story of a mother who, having killed her sadistic husband while defending her children, kept her guilty secret for ten years. Ann Austin’s story, scripted by Zelda Sears and Florence Ryerson, could have been a dank weepie without her.  Although an actress of note in Europe, she went to grace other Hollywood movies without reaching deserved stardom. This film plays occasionally on TCM (Turner Classic Movies). 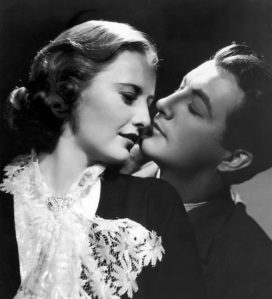 His Brother’s Wife, 1936. Robert Taylor was now so big that the London Observer declared: “1936 will go on record as the year of Edward VIII, the Spanish war and Robert Taylor”  He and Barbara Stanwyck married some time after making His Brother’s Wife with Joseph Calleia. On-screen the romance Taylor-Stanwyck romance was far from smooth, as scripted by Leon Gordon and John Meehan.  He was a medical researcher, she a nightclub hostess; he went out to the tropics to investigate spotted fever; she, miffed, married his brother; by the last reel she had spotted fever and had her, and W. S. Van Dyke had another in his seemingly endless series of hits. This shows occasionally on TCM. 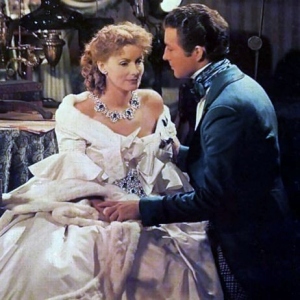 Camille, 1936.  Tragedy on the screen, tragedy at the studio. Before its completion, its producer,  Irving Thalberg, died in September 1936 at the age of 37 and at the peak of his creative power.  His associate and best friend, Bernard Hyman, finished the picture, with George Cukor continuing his superlative direction.  Aware of the film’s excellence and in tribute to Thalberg, an unprecedented MGM contingent attended its California premiere, including Schenck, Mayer and –rarest of public appearances–Garbo.  The applause of that audience has continued ever since; it is one of the most frequently revived and some consider Garbo’s performance to be the finest on film.  Available on DVD. 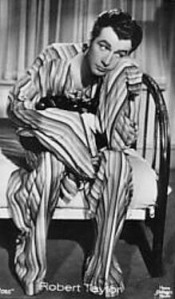 Personal Property, 1937.  Another remake released early in 1937 was Personal Property (The Man in Possession) from the H.M Harwood comedy Robert Montgomery filmed in 1931.  Hugh Mills and Ernst Vajda gave it a script build-up to the heroine role that Jean Harlow could co-star with Robert Taylor, making a torrid paybox team.  It worked entertainment-wise, too.  Available on DVD. 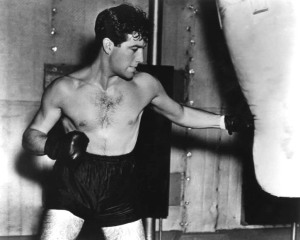 The Crowd Roars, 1938.  Seeking a more rugged image for the almost too handsome Robert Taylor, the studio cast him as a prizefighter in The Crowd Roars.  It worked, thanks to Richard Thorpe’s vigorous direction of a hardboiled screenplay by Thomas Lennon, George Bruce and George Oppenheimer from Bruce’s original story, and to Taylor’s always serious application to his profession; the box office roared. Available on DVD. 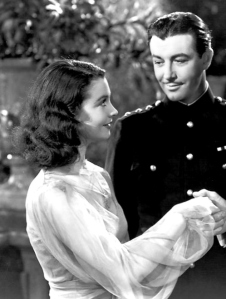 Waterloo Bridge, 1940. Waterloo Bridge was one of 1940’s major successes. Like Scarlett O’Hara, its heroine is no better than she ought to have been; but unlike Scarlett she was a frail creature, who descended from ballet dancer to prostitute to suicide.  Vivien Leigh proved her quality by having as strong an effect on audiences’ emotions in this second Hollywood role as in her famous first.  Robert Taylor’s British officer had a Nebraska accent  but was otherwise convincing and praiseworthy. Available on DVD. 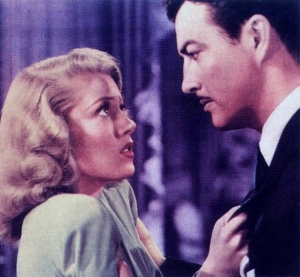 Johnny Eager, 1941.  Taylor was Johnny and Turner was eager, and their highly inflammable romance blended neatly with underworld action in the slick script of James Edward Grant and John Lee Mahin.  Taylor’s big-time criminal was one of his best acting jobs , but the picture was pinched by Van Heflin as his hanger-on, a gentle drunk; he won the year’s Oscar for best supporting actor. The John Considine Jr. production amassed impressive profits. Available on DVD. 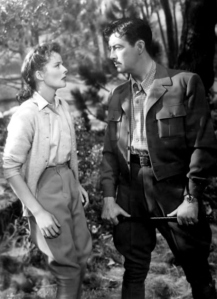 Undercurrent, 1946.  Robert Taylor had a strong script and a brilliant partner for his first movie after three years in the Navy.  (In this he was luckier than some other stars returning from war service–Clark Gable, Mickey Rooney, Gene Kelly, Van Heflin, Red Skelton). In Undercurrent he married Katharine Hepburn and changed from hero to heavy before her very eyes.  Lots of tense drama, with Robert Mitchum lurking in the woods and Vincente Minelli in the director’s chair.  Available on DVD. 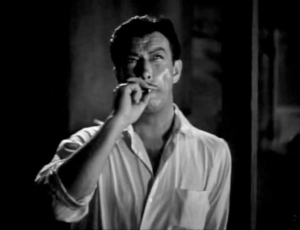 The Bribe, 1948. The Bribe gave Ava Gardner her first star billing at MGM after a seven-year build-up.  Robert Taylor loved her, hated Charles Laughton, while breaking up a war surplus racket in the tropics.  This juicy chunk of melodrama was notable for its climax, a fight between Taylor and villain Vincent Price staged by Robert A. Leonard amid a stupendous fireworks display.  Available on DVD 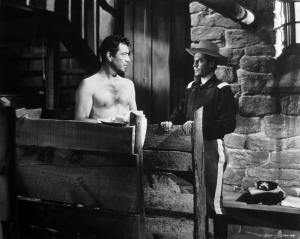 Ambush, 1949.  The studio’s year ended with a Yippee! as Robert Taylor rode down the wicked Apaches who dared to capture a white woman.  Ambush was a superior Western, as might be expected from Sam Wood (who died at 66 soon after directing it), and it did strong business.  Plays occasionally on TCM. 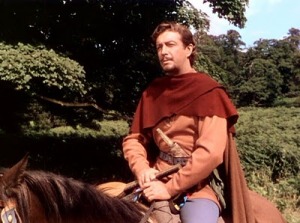 Ivanhoe, 1952.  MGM at last broke through with its first British-made box-office smash since prewar days with Ivanhoe.  Admittedly, it has to import four stars, producer and director from Hollywood: Robert Taylor, Elizabeth Taylor, Joan Fontaine and George Sanders; Pandro Berman and Richard Thorpe.  But three of these were British born.  Not to mention Sir Walter Scott.  The actors all fell to with a will, stirring up a fine storm of Technicolored derring-do. Available on DVD. 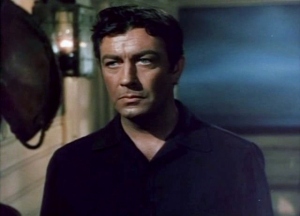 All the Brothers Were Valiant, 1953.  While Mogambo was mopping up at the box office, another old faithful emerged from the files.  All the Brothers Were Valiant, filmed before in 1922 and 1928.  Not even the modern acting styles of Stewart Granger and Robert Taylor could disguise its ancient hokum; director Richard Thorpe and scripter Harry Brown didn’t try to.  Maybe they were right; it made money again. Available on DVD. 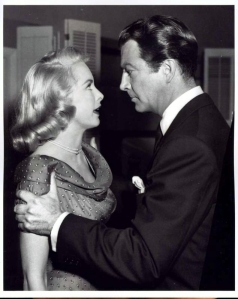 Rogue Cop, 1954.  The studio set a speed record on Rogue Cop, only four months elapsing between story buy and final preview.  Director Roy Rowland and producer Nicholas Nayfack kept it fast on the screen, and Robert Taylor thankfully climbed out of the Valley of the Kings to higher paybox levels in the title role. Not available on DVD; hasn’t played on TCM lately. 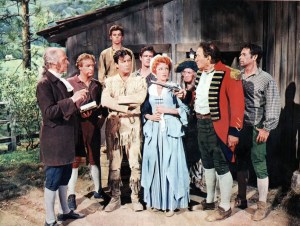 Many Rivers To Cross, 1954. Victor McLaglen fixes a shotgun wedding for daughter Eleanor Parker and trapper Robert Taylor in Many Rivers To Cross. About as subtle as a school performance of Taming of the Shrew, which the Guy Trosper-Harry Brown script often resembled, the backwoods comedy rattled along with uninhibited hokum and action.  Nobody liked it but the public.  Available on DVD.

I became a Robert Taylor fan at the age of 15 when his TV show, "The Detectives" premiered. My mother wanted to watch it because she remembered Mr. Taylor from the thirties. I took one look and that was it. I spent the rest of my high school career watching Robert Taylor movies on late night TV, buying photos of him, making scrapbooks and being a typical teenager. College, marriage and career intervened. I remember being sad when Mr. Taylor died. I mailed two huge scrapbooks to Ursula Thiess. I hope she got them. Time passed, retirement, moving to Florida. Then in 2012 my husband Fred pointed that there were two Robert Taylor movies that evening on Turner Classic Movies--"Ivanhoe" and "Quentin Durward." I watched both and it happened all over again. I started this blog both for fans and for people who didn't know about Robert Taylor. As the blog passes 200,000 views I'm delighted that so many people have come by and hope it will help preserve the legacy of this fine actor and equally good man.
View all posts by giraffe44 →
This entry was posted in Films and tagged 1930s, A Wicked Woman, acting, actor, All the Brothers Were Valiant, Ambush, Ava Gardner, Barbara Stanwyck, Camille, celebrities, Eleanor Parker, Elizabeth Taylor, entertainment, gentleman, glamor, Golden Era, Greta Garbo, handsome, His Brother's Wife, hollywood, Ivanhoe, Janet Leigh, Jean Harlow, Jean Parker, Johnny Eager, Katharine Hepburn, Lana Turner, Many Rivers To Cross, matinee idol, MGM, movie stars, Personal Property, Richard Thorpe, Robert Taylor, Rogue Cop, Stewart Granger, TCM, The Bribe, The Crowd Roars, Turner Classic Movies, Undercurrent, Valley of the Kings, Vivien Leigh, Waterloo Bridge. Bookmark the permalink.

3 Responses to “The MGM Story”– a Terrific Book