Robert Taylor receiving his discharge papers from the Navy, 1945.

Robert Taylor was discharged from the Navy in November 1945. He resumed his film career at MGM but moved into darker, more challenging roles than he’d had before the war. 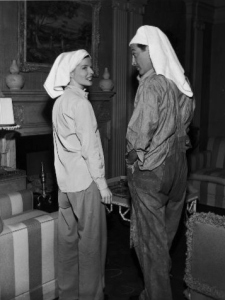 His first film was Undercurrent, co-starring Katharine Hepburn. It was released in in November 1946.   Mr. Taylor plays a mentally disturbed industrialist who marries Hepburn with disastrous consequences.  Vincente Minelli, the director, was highly complimentary about Mr. Taylor’s performance, saying that he stole the picture from Hepburn.

Mr. Taylor’s post-war career continued to move him away from his frivolous thirties image.  In High Wall, 1947, he plays another disturbed character, a brain-damaged veteran who may or may not have killed his wife.  It is one of the best performances of his career and should have commanded the attention of the Motion Picture Academy.  Audrey Totter and Herbert Marshall were the other leading players.  The compatibility of the actors and director Curtis Bernhardt made the shoot a relaxed and friendly one, There aren’t many anecdotes from the filming, but here are two:

Doubly Terrific…….Taylor and Totter, Robert and Audrey, that is, are a doubly terrific

When Taylor fluffed a line, however, Totter hid her script from his view. “Just forget it,” she said, “you have too many lines in this picture anyway, leave me some.”  (Original picture caption).

One day filming of High Wall went well into the night, and Bob and Totter were famished and went looking for food at the studio commissary, but found it had already closed for the night.  Then they went looking for a restaurant but found them so crowded it would take a great deal of time to both get seated and eat their food. Bob told Totter:  “Let me take you to the best restaurant in town.”  He took her home where Barbara made them bacon and eggs.  “and it was great,” recalled Totter.  (Charles Tranberg, Robert Taylor: a Biography, BearManor Media, 2011, p. 182.)

Robert Taylor’s performance in High Wall has received a lot of positive feedback:

Classic Movie Ramblings, October 19, 2010. In 1947, Robert Taylor obviously realizing that his days as a matinee idol were numbered, had just started to reinvent himself as a much darker sort of actor. It was an experiment that proved highly successful and Taylor went on to give some superb performances in noirish thrillers like The Bribe and Rogue Cop.  His performance is one of the highlights of High Wall–he’s sympathetic but with lots or rough edges.

Craig Butler, Rovi. High Wall is a good film noir that benefits from an excellent performance from matinee idol Robert Taylor. Taylor had at this time in his career already begun attempting more challenging roles, and Wall stands as one of his finest achievements. It’s the kind of film that demands a strong, central performance, one that can careen from one motion to another yet must be grounded in a solid, sturdy performer that can carry the picture. Taylor fits the bill very nicely, teetering on the brink when required but always pulling back from the edge to keep Wall focused.

A Noodle in a Haystack, May 29, 2010. As Steven Kenet, Taylor pulls out all the stops and gives a pretty raw, but not overdone performance.  He isn’t always easy to like.  In fact, there are times where he’s scary, but it’s a good portrayal of a man with some real issues.

Turner Classic Movies.  Obviously, High Wall was MGM’s attempt to duplicate the success Bernhardt had had with similar material at Warner Brothers like Possessed (1947) in which Joan Crawford played a schizophrenic woman who commits a murder. Studio mogul Louis B. Mayer also figured that if a former romantic lead like Ray Milland could convincingly play an alcoholic on a binge in a dark-themed movie like Billy Wilder’s The Lost Weekend (1945), then matinee idol Robert Taylor could play a mentally disturbed war veteran. While 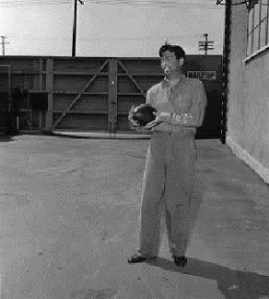 High Wall is not in the same league as Billy Wilder’s film, Taylor gives an impressive performance and he’s greatly aided by a superb ensemble cast.

Courtesy of Film Noir Foundation.  Quintessential postwar noir, resurrected in a new 35 mm. print by the Film Noir Foundation!  Brain-damaged vet Robert Taylor confesses to murdering his unfaithful wife and is sentenced to a sanitarium.  His doctor (sexy Audrey Totter) gradually realizes he

might not be guilty.  Taylor gives his best performance ever in this neglected gem, which glistens with director Curtis Bernhardt’s feverish rain-soaked noirscapes.

Laura’s Miscellaneous Musings, December 30, 2008.  The Film (High Wall) has outstanding performances by Taylor as the tormented man and

Mr. Taylor had a heavy beard and needed to shave twice a day.

Totter as his doctor.  They are both simply terrific  and carry the film, appearing in most of the scenes.  Taylor, who spent roughly a quarter century as MGM’s longest-running star, has been written off too often in the past as just a “handsome face” and not received the appreciation he deserves as an actor.  As I read various books and websites, I think that may gradually changing as movie fans and historians take a fresh look at his career.

Variety. Taylor scores in his role, making it believable.

portraying ordinary guys with bad problems, as we expect the handsome Steven Kenet to prevail by raising his voice or arching an eyebrow higher (his piercing eyes and exaggerated brow was the model for the Italian comic character Diabolik.  Steven puts his energy into being stubbornly uncooperative.  Although he can’t remember anything, Kenet seems as resigned to the likelihood of his guilt as the D.A.  This fundamental negativity nudges his character just over the line into noir territory. 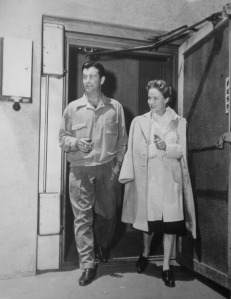 Clockwise from upper left: Making coffee; the two stars stepping out; playing with Bobby Hyatt who played Mr. Taylor’s son in the movie; standing (in character) outside of his dressing room.

I became a Robert Taylor fan at the age of 15 when his TV show, "The Detectives" premiered. My mother wanted to watch it because she remembered Mr. Taylor from the thirties. I took one look and that was it. I spent the rest of my high school career watching Robert Taylor movies on late night TV, buying photos of him, making scrapbooks and being a typical teenager. College, marriage and career intervened. I remember being sad when Mr. Taylor died. I mailed two huge scrapbooks to Ursula Thiess. I hope she got them. Time passed, retirement, moving to Florida. Then in 2012 my husband Fred pointed that there were two Robert Taylor movies that evening on Turner Classic Movies--"Ivanhoe" and "Quentin Durward." I watched both and it happened all over again. I started this blog both for fans and for people who didn't know about Robert Taylor. As the blog passes 200,000 views I'm delighted that so many people have come by and hope it will help preserve the legacy of this fine actor and equally good man.
View all posts by giraffe44 →
Gallery | This entry was posted in Films and tagged acting, actor, Audrey, celebrities, Curtis Bernhardt, Dorothy Patrick, drama, entertainment, film noir, gentleman, glamor, Golden Era, handsome, High Wall, hollywood, matinee idol, MGM, movie stars, murder, psychiatric hospital, Robert Taylor, romance, Totter. Herbert Marshall, Turner Classic Movies, veteran. Bookmark the permalink.

5 Responses to Robert Taylor Behind the Scenes: “High Wall,” 1947