Robert Taylor was born in 1934. He sprang fully formed from the head of Louis B. Mayer.* 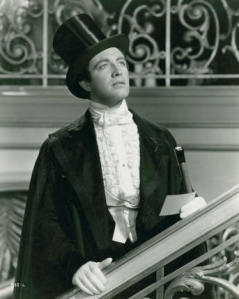 His name was chosen by Ida Koverman, Mayer’s secretary. He was tall, dark and handsome with sparkling blue eyes and black hair. His eyebrows were tweaked and his hair restyled to bring out the widow’s peak. Mr. Taylor liked parties and night clubs and often wore tuxedos or white tie and tails. He moved elegantly, danced beautifully and flirted with beautiful ladies. Robert Taylor had an aura of sexuality but not dangerously so. Young women wanted to bed him. Older women wanted to mother him and then to bed him. 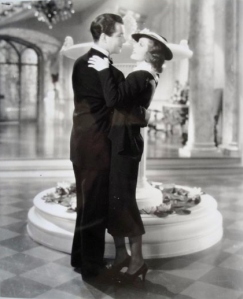 As the years passed, Mr. Taylor hardened, playing more rough and tumble roles. In 1943 he completely transformed into a doomed soldier in “Bataan.” After World War II he played a greater variety of roles, some villains included. In 1950 he was transformed into an epic hero in parts like “Quo Vadis,” ”Ivanhoe,” “Knights of the Round Table,” and “Quentin Durward.” According to the Golden Globes, he was the world’s most popular actor in 1953 (in a tie with Alan Ladd). 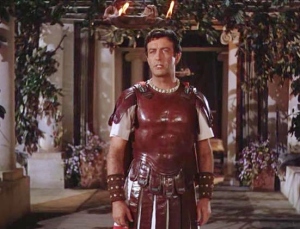 Robert Taylor stayed with his creators, MGM, for the longest time of any star. When he left their protection in 1959, he was on his own.  Realizing that the great days of the big screen were over, Mr. Taylor reinvented himself as a corporation, owning 50% of his TV show, “The Detectives.” In the 1960’s he continued as a movie star, never dropping to secondary billing. Robert Taylor died, still working, in 1969.

Spangler Arlington Brugh was born in 1911 to a rural Nebraska doctor and his wife. He was a fragile child who nearly died in the 1918 flu epidemic. Mrs. Brugh coddled him and made him dress in Little Lord Fauntleroy clothes** for school. Nonetheless, he grew up loving the outdoors, horseback riding, games and guns. Although no scholar, he read a great deal, mostly adventure stories. Arly Brugh had numerous girlfriends in high school and became interested in acting at that time as well as playing the cello. 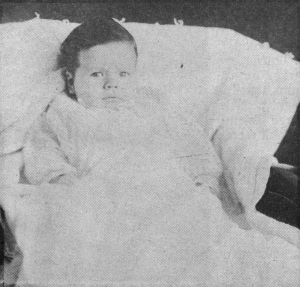 Arlington Brugh followed his music professor to Pomona College in Claremont, California, 40 miles from Los Angeles. He joined the drama society and acted in many plays, mostly as the lead. Most accounts have it that he was spotted in a college play by an MGM talent scout and Robert Taylor was created soon afterward.

Arly Brugh continued to exist until the cameras rolled. Then the glamorous Robert Taylor took over. Arly lived on a ranch and grew alfalfa. He bred horses and wore jeans, boots, plaid shirts and cowboy hats. He loved hunting and fishing. When people met him, they were impressed by his lack of ego and pretentiousness. In 1939 MGM decreed that he marry Barbara Stanwyck, a fellow movie star. He cared for her and she loved Robert Taylor. Ms. Stanwyck was a city girl. She raised horses as a business but didn’t love them the way her husband did. 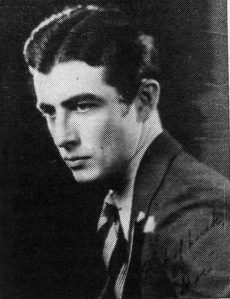 In 1950 Robert Taylor/Arly Brugh asked for his freedom and he and Ms. Stanwyck were divorced in 1951. Mr. Taylor began to live a transcontinental celebrity life with numerous female companions. In 1954 he married the German actress and model Ursula Thiess and found happiness. Ms. Thiess wanted to be a wife and mother and had no career ambitions. She loved Arly Brugh and Robert Taylor. They became the parents of two children and lived happily on an 113 acre farm. Robert Taylor made as few public appearances as he could. Ursula Thiess noted his ability to shift from one personality to the other. “[In Thailand, 1968] I noticed Bob’s weariness more than ever. He avoided most of the touring trips…..But the previously scheduled events of tournaments, dinners and especially the meeting with the handsome young king of Thailand, found him present and at his showmanship best.” 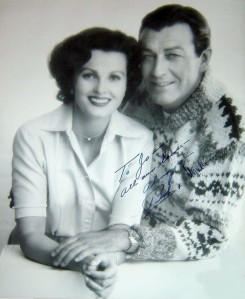 Arly Brugh took his wife back to Nebraska to his roots and his old friends. She fit in with the ordinary lives they led. She was compatible with such people as the Tysers, the Eyths and Shimerdas. She loved the country and became a good rider and a crack shot. She preferred jeans to gowns while looking great in both. She traveled extensively with her husband and supported him at every turn.

In no way am I suggesting any kind of schizophrenia here. Robert Taylor stopped using the Brugh name in the thirties, except for his military service during World War II. My point is that Robert Taylor survived and prospered for thirty five years in the dream factory by holding on to the values and morals of his Nebraska background. He was honest, decent, patriotic and brave. Mr. Taylor didn’t drink to excess or do drugs. His life was a complete contrast to those actors who commit suicide, even now, in their twenties and thirties because of career pressures and drug abuse. 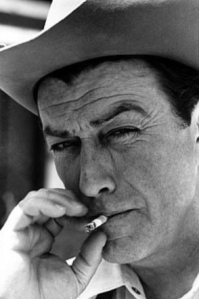 The saddest part is that despite his stability Mr. Taylor constantly self-medicated with nicotine and caffeine. You rarely see a photo of him without a cigarette. He knew he was sabotaging himself but couldn’t stop. Robert Taylor died of lung cancer at the young age of 57. Ursula Thiess called his last months “his greatest performance.” Reporters were gathered outside the hospital to hear about the famous actor’s condition while Arly Brugh died in his wife’s arms.

*This is a reference to the Greek myth of the birth of Athena.  Zeus developed the mother of all headaches. He howled so loudly it could be heard throughout the earth. The other gods came to see what the problem was. Hermes realized what needed to be done and directed Hephaestus to take a wedge and split open Zeus’s skull. Out of the skull sprang Athena, full grown and in a full set of armor.  (J.M.Hunt)

Thiess, Ursula. But I Have Promises To Keep: My Life Before, With & After Robert Taylor. Xlibris Corporation, 2007.

I became a Robert Taylor fan at the age of 15 when his TV show, "The Detectives" premiered. My mother wanted to watch it because she remembered Mr. Taylor from the thirties. I took one look and that was it. I spent the rest of my high school career watching Robert Taylor movies on late night TV, buying photos of him, making scrapbooks and being a typical teenager. College, marriage and career intervened. I remember being sad when Mr. Taylor died. I mailed two huge scrapbooks to Ursula Thiess. I hope she got them. Time passed, retirement, moving to Florida. Then in 2012 my husband Fred pointed that there were two Robert Taylor movies that evening on Turner Classic Movies--"Ivanhoe" and "Quentin Durward." I watched both and it happened all over again. I started this blog both for fans and for people who didn't know about Robert Taylor. As the blog passes 200,000 views I'm delighted that so many people have come by and hope it will help preserve the legacy of this fine actor and equally good man.
View all posts by giraffe44 →
This entry was posted in Biography and tagged 1930s, acting, actor, Arlington Brugh, Arly Brugh, Barbara Stanwyck, celebrities, drama, entertainment, evening clothes, gentleman, glamor, Golden Era, handsome, hollywood, Ida Koverman, Ivanhoe, Knights of the Round Table, Little Lord Fauntleroy, Louis B. Mayer, matinee idol, MGM, movie stars, Mr. Taylor, Quentin Durward, Quo Vadis, Robert, Robert Taylor, romance, Spangler Arlington Brugh, Ursula Thiess. Bookmark the permalink.