Robert Taylor and the Coronation of Queen Elizabeth II 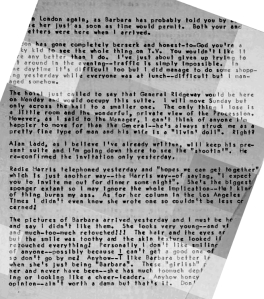 This letter has bits and pieces missing but none the less reflects an interesting moment in history.  The Coronation of Queen Elizabeth II was on June 2, 1953 and this letter was written days before that.  Among other things Mr. Taylor mentions that he is losing his hotel suite on the processional route and has to rely on the generosity of Alan Ladd to see the festivities. The recipient of the letter was publicist Helen Ferguson.

Letter begins:[missing] in London again, as Barbara has probably told you by now [missing] her as soon as time would permit. Both your and [missing] letters were here when I arrived.

London has gone completely berserk and honest-to-God you’re a lucky kid to see the whole thing on TV. You wouldn’t like it here any better than I do. I’ve just about given up trying to get around in the evening—traffic is simply impossible. In the daytime it’s difficult too but I did manage to do some shopping yesterday while everyone was at lunch—difficult but I managed somehow.

The hotel just called to say that General Ridgeway* would be here on Monday and would occupy this suite. I will move Sunday but only across the hall to a smaller one. The only thing I lose is a little room and the wonderful, private view of the Procession. However, as I said to the Manager, I can’t think of anyone I’m happier to move for than the General—he’s always struck me as a pretty fine type of man and his wife is a “livin’ doll.” Right?

Alan Ladd, as I believe I’ve already written, will keep his present suite and I’m going down there to see the “shootin’”. He re-confirmed the invitation only yesterday.

1953, Coronation of Queen Elizabeth II, Coronation Rehearsal, London, England, Robert Taylor with an Officer of the 4th Hussars on horseback .

Radie Harris** telephoned yesterday and “hopes we can get together” which is just another way –the Harris Way—of saying, “I expect you to invite me out for dinner some night,” She’s the biggest sponger extant so I may ignore the whole implication—that kind of thing burns my ass. As for her column in the Los Angeles Times I didn’t even know she wrote one so couldn’t be less concerned!

The pictures of Barbara arrived yesterday and I must be honest and say I didn’t like them. She looks very young and [missing] and much too much retouched!!! The hair and the eyes are [missing] but the smile was toothy and the skin texture looked like [missing] retouched everything! Personally I don’t like smiling [missing] of anyone—possibly because I can’t get a good one of [missing] so don’t go by me! I like Barbara better in [missing] when she’s just being “Barbara.” These “girlish” [missing] her and never have been—she has much too much depth [missing] or looking like a cheerleader. Anyhow honey [missing] opinion—ain’t worth a damn but that’s it. Don’t….Letter ends.

*Matthew Bunker Ridgway (March 3, 1895 – July 26, 1993) was a United States Army general.  He held several major commands and was most famous for resurrecting the United Nations war effort during the Korean War. Several historians have credited Ridgway for turning the war around in favor of the UN side. His long and prestigious military career was recognized by the award of the Presidential Medal of Freedom on May 12, 1986 by President Ronald Reagan, who stated that “Heroes come when they’re needed; great men step forward when courage seems in short supply.”   (Wikipedia)

George Nobbs, Robert Taylor and Radie Harris in 1936 on the radio for Mulsified Shampoo.

**Radie Harris (October 24, 1904 — February 22, 2001) was an American journalist and newspaper columnist noted for her close relationships with Broadway denizens and stars from the Golden Age of Hollywood, as well as for her breezy chronicles on the world of entertainment.She was best known for her work for the Hollywood Reporter   She contributed to Photoplay and other movie magazines and for a brief interlude during the World War II years she wrote for Variety. (Wikipedia)

Barbara Stanwyck was 45 when this letter was written.  These are some pictures of her from 1953 that may be the sort of thing Mr. Taylor was talking about.

Robert Taylor in London May-June 1953 (the beard is for Knights of the Round Table) :

And the procession itself: 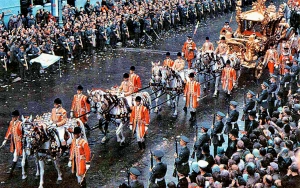 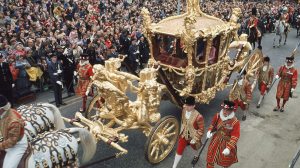 I became a Robert Taylor fan at the age of 15 when his TV show, "The Detectives" premiered. My mother wanted to watch it because she remembered Mr. Taylor from the thirties. I took one look and that was it. I spent the rest of my high school career watching Robert Taylor movies on late night TV, buying photos of him, making scrapbooks and being a typical teenager. College, marriage and career intervened. I remember being sad when Mr. Taylor died. I mailed two huge scrapbooks to Ursula Thiess. I hope she got them. Time passed, retirement, moving to Florida. Then in 2012 my husband Fred pointed that there were two Robert Taylor movies that evening on Turner Classic Movies--"Ivanhoe" and "Quentin Durward." I watched both and it happened all over again. I started this blog both for fans and for people who didn't know about Robert Taylor. As the blog passes 200,000 views I'm delighted that so many people have come by and hope it will help preserve the legacy of this fine actor and equally good man.
View all posts by giraffe44 →
This entry was posted in Letters and tagged acting, actor, Alan Ladd, Barbara, Barbara Stanwyck, celebrities, Coronation, Elizabeth II, England, entertainment, frenzy, glamor, Golden Era, handsome, hollywood, Knights of the Round Table, London, matinee idol, Matthew Ridgeway, MGM, movie stars, Mr. Taylor, Mrs. Matthew Ridgeway, photographs, Queen Elizabeth II, Radie Harris, Robert Taylor, traffic. Bookmark the permalink.