Robert Taylor Was NOT a “Friendly” Witness at the HUAC

The following is a letter written by Robert Taylor to House un-American Activities investigator H.A. Smith.  Mr. Taylor is boiling mad.  He had testified the previous spring in Los Angeles and his supposedly confidential words were immediately leaked by the Committee.  Mr. Taylor felt betrayed and humiliated and wanted nothing to do with the hearings.  As he makes very clear, he believes in anti-communism but deeply distrusts politicians.  The tone of the letter is passionate and emotional and the signature is informal. Robert Taylor’s supposed “red bashing” at the hearings has been used as a blunt instrument by the left to injure his reputation and his legacy.  He has been called super-friendly, eager to “name names”, etc. etc. This letter is solid proof that he was nothing of the kind. This is a copy of the letter sent to me by the National Archives in Washington.  For some reason it is a copy of a typed copy of the original Taylor typed letter.  I retyped it for this blog. For a fuller treatment of Robert Taylor and the HUAC, look at “Robert Taylor and Communism” on this blog, as well as (Linda J. Alexander, Reluctant Witness: Robert Taylor, Hollywood and Communism, Tease Publishing, 2008.)

It has, heretofore, been my impression that any testimony given by people of my convictions was considered to be a voluntary contribution to the fight against Communism in this country—especially in this industry. Any statements I have made in the past have been given under this assumption, and any effort expended has been expended purely through my own volition—not because I was ordered so to do! 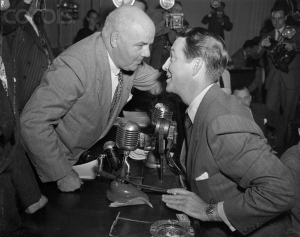 According to your last letter I will be subpoenaed to appear in Washington at the forthcoming hearing on or about October 20th.  Apparently there is nothing much I, as a citizen of this country, can do about that! I have repeatedly expressed my unwillingness to appear at that hearing and have given what I considered adequate reasons for my feelings.

For the records, may I go over those reasons again as briefly as possible?

At the recent hearings here in Los Angeles I was asked—not subpoenaed—to testify. I did so willingly, acting under the assurance that my testimony was confidential. My testimony was not kept confidential and I must confess that when certain people on the “other side of the fence” saw fit to ridicule said testimony I had to agree with them—it did look pretty silly!  I am not, and have never professed to be, an expert on the subject of Communism; I could, and can, only express an opinion. And, after all, what good are opinions when your office, the files of the Dies* and Thomas** Committees, and those of the FBI are filled to overflowing with facts!

Having testified once—good or bad—I can see no reason whatsoever for my having to testify again. Whatever good was to be done has been done—even to the extent of having garnered some free publicity for Mr. Thomas and his Committee.

Which brings me to another point. I’ve never cared a whole helluva lot for politicians, whether they be Republican or Democrat. And I’ve certainly never believed it inherent in my job as a motion picture actor to aid in feathering any of their nests for them via publicity from my name—a name, by the way, which I have worked Goddam hard to build and maintain without any blemish. My last appearance to testify was valuable only insofar as publicity was concerned; my appearance in Washington can be valuable purely for the same reason. I firmly believe this to be utterly ridiculous and a waste of time, both for me and for the Committee!

Your personal time and effort expended in this investigation have been valuable and sincerely offered. I want you to believe that I’m convinced of that fact. Of the motives of several members of the Committee I’m not so sure. These investigations, the way they’re being run in Washington at the moment, remind me more of a 3-Ring Circus than of a sincere effort to rid the country of a real threat. Despite your personal sincerity in the matter I can’t resist the temptation to cross my fingers for you; when the subject matter gets juicy enough and the names involved are capable of getting “space” it’s awfully hard for a dyed-in-the-wool politician to stick to the subject.

If I am subpoenaed—and I sincerely hope that something can be done to pigeon-hole that subpoena—I shall, naturally, go to Washington for the investigation. I will feel utterly ridiculous and shall resent every minute of the whole thing. I shall, moreover, kick myself for ever having gotten myself into such a position by having testified previously. Moreover, as a “friendly” witness, I shall be friendly only to the cause; as far as being friendly to the Committee itself is concerned that possibility went out the window the last time I was “crossed up”. In order to get enough “talk” out of me this time to provide material for a “cross” they’ll have to get a very experienced prosecuting attorney. In looking over the list of potential witnesses in the paper this morning, I notice that the friendly and the unfriendly are split about 50-50. It seems a little ridiculous, especially when we’re supposed to be investigating Communists, to investigate as many non-Communists as Communists. Therefore, I assume that one uncooperative friendly witness won’t be much of a stumbling block.

If this letter makes any sense to you, Mr. Smith, I’d suggest that you send a copy of same

on to Mr. Thomas and any other member of the Committee whom you select. I want them to know exactly how I feel about the way I was treated last time, here in Los Angeles.

I also would like to know why a man like Howard Emmett Rogers,*** a man who undoubtedly knows more about Communism here in Hollywood than any other single person, is not listed among the friendly witnesses. He knows—I don’t—perhaps the Committee figures his name isn’t “box office”! But that makes sense, I guess—there’s nothing any of us are going to tell them in Washington that the FBI didn’t know five years ago. Maybe it’s easier to call twenty friendly “names” from Hollywood than to have a look at the FBI files! Maybe it’s better publicity for the home-state electorate too!

It was a pleasure talking with you, Mr. Smith, and may I congratulate you and Mr. Leckie**** on the sincere job I know you’ve done. If all of us did as good a job I’ve no doubt but that Communism could be stamped out in this country, and quickly. And, in the future, if there is anything I, in my very limited way, can do to help out in this fight against Communism, please call on me. You’ll seldom find a guy who hates Communism as much as I—nor one who is so adamant about going to Washington to testify. Sorry-but that’s the way I feel about it.

Good luck and let me hear from you when time permits.

P.S. Insofar as transportation to Washington is concerned—God forbid it actually becomes necessary—I’d prefer to fly. I’ll contact you about that little matter at a later date—in case I am unsuccessful in ducking the U.S. Marshal.

**J. Parnell Thomas. Following the Republican Party gaining control of the 80th Congress, Thomas was appointed chairman of the House Committee on Un-American Acitivities  (HUAC). In May 1947, Thomas traveled to Hollywood to meet with film industry executives with a view to exposing what he believed was Communist infiltration of motion pictures content by members of the Screen Writers Guild. Returning to Washington, D.C., he shifted the focus of the committee to what he called the “subversives” working in the film business.  (Wikipedia)

Mr. Taylor in the center ring at the 3-Ring Circus.

This is the letter Mr. Taylor received in return from H.A. Smith.  I should he think he found it infuriating.  The tone is cool and impersonal and none of his objections to appearing are even acknowledged.  The subpoena explanation is very strange.

Receipt is acknowledged of your letter dated September 23rd, and I am forwarding a copy of it to Mr. Thomas, Chairman of the Committee, and to Mr. Stripling*, Chief Investigator, for their information and advice.

Robert Taylor walks down the street after leavings the hearings, accompanied by a crowd of admirers.

I note in your first paragraph that you mention your testimony in the past has been voluntary and not because you were ordered to do so. I am sure that we are in full accord in that respect, and the reason I stated you are to be subpoenaed is that each and every individual, in the opinion of the Committee, should be subpoenaed for his own protection.

I regret that you feel so keenly about not testifying at the forthcoming hearing in Washington, as I sincerely feel that it is necessary for all of us to cooperate in fighting this vicious enemy.

*Robert Stripling.  The members during the 1947  hearings were Reps. J. Parnell Thomas (NJ), Richard Nixon (CA), Richard B. Vail (IL),John McDowell (PA), and John Stephens Wood (GA)] Robert E. Stripling was the Chief Investigator] and appears on many recordings and transcripts of those hearings. (Wikipedia)

I became a Robert Taylor fan at the age of 15 when his TV show, "The Detectives" premiered. My mother wanted to watch it because she remembered Mr. Taylor from the thirties. I took one look and that was it. I spent the rest of my high school career watching Robert Taylor movies on late night TV, buying photos of him, making scrapbooks and being a typical teenager. College, marriage and career intervened. I remember being sad when Mr. Taylor died. I mailed two huge scrapbooks to Ursula Thiess. I hope she got them. Time passed, retirement, moving to Florida. Then in 2012 my husband Fred pointed that there were two Robert Taylor movies that evening on Turner Classic Movies--"Ivanhoe" and "Quentin Durward." I watched both and it happened all over again. I started this blog both for fans and for people who didn't know about Robert Taylor. As the blog passes 200,000 views I'm delighted that so many people have come by and hope it will help preserve the legacy of this fine actor and equally good man.
View all posts by giraffe44 →
This entry was posted in Politics and tagged 1947, A. B. Leckie, acting, actor, celebrities, Congress, drama, flying, H.A. Smith, handsome, hearings, hollywood, House of Representatives, Howard Emmett Rogers, HUAC, investigation, investigator, J. Parnell Thomas, Martin Dies, matinee idol, MGM, movie stars, Mr. Taylor, Robert Stripling, Robert Taylor, subpoena, Washington D.C.. Bookmark the permalink.