I have some of Robert Taylor’s letters (just the text) that I plan to keep publishing because it gives him a chance to speak in his own voice.  Since Mr. Taylor never published his memoirs, these letters are a rare chance to hear from him directly. This one was written at a very tough time in his life but he still had time for a boy with whom he had worked. 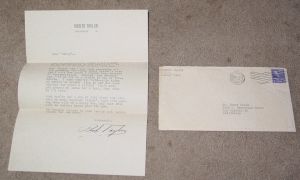 Just a quick note to thank you for your very thoughtful wire while I was cooped up in the hospital in San Francisco. It did me a lot of good to hear from you.

Mrs. Taylor and I got back yesterday after spending two weeks under doctor’s care and I will now start a rather long process of recuperation. However, the doctors say I’ll be fit as a fiddle in two or three  months. I hope

they’re right—this thing of tottering around like an old man goes against the grain a little! Can’t even get aboard my horse for a long, long time so I’m told.

Hope you’ve had a lot of luck since the picture we made together “Jimmy”, that this coming Xmas will be a Merry one, and that 1951 will be another great year for you.

My kindest regards to your family and, again, thanks for the wire.

Henry Marco played “Jimmy” in the movie Devil’s Doorway. Mr. Taylor was very good with child actors.  Darryl Hickman, another young performer notes: “Taylor was a real nice man and he wasn’t condescending to kids like some actors were. He treated me as an equal.” (CharlesTranberg, Robert Taylor: a Biography, BearMedia, 2011, page 222)

Taylor and Stanwyck in Italy.

After Robert Taylor arrived home from Rome, where he had been filming Quo Vadis, the newspapers announced that he and Barbara Stanwyck had separated. Despite this, they both went to San Francisco where Mr. Taylor underwent surgery for a double hernia. Ms.Stanwyck stayed with him at the hospital. “Those hours he was on the operating table were the worst I have ever spent in my life,” she told gossip columnist Louella Parsons. On December 16, 1950, the Taylors formally announced their separation. (Jane Ellen Wayne, Robert Taylor: the Man with the Perfect Profile, N.Y., St. Martin’s Press, 1973, 1987, page 151.)

Within a week of returning [from Italy] Bob went under the knife undergoing a two hour abdominal operation at the Stanford Hospital in San Francisco. He had been suffering from a double hernia.  Barbara was at his side.  Barbara told the press that the operation was a success in part “due

In Venice the buildings aren’t he only things showing cracks.

to Bob’s splendid physical condition he came through in very fine shape.  Yet he was expected to remain the hospital for two weeks.  (Charles Tranberg, Robert Taylor: a Biography, Bear Manor Media, 2011, page 229.)

Despite the separation Ms. Stanwyck gave Mr. Taylor a Cadillac for Christmas. Since he was unable to drive it at the time, she drove it herself. As soon as he was able to, Robert Taylor went to Palm Springs to recuperate. Ms. Stanwyck stayed in Los Angeles. (Linda J. Alexander, Reluctant Witness: Robert Taylor, Hollywood and Communism, Tease Publishing, 2008.)

Robert Taylor and Barbara Stanwyck and Robert Stack at a party with Louella Parsons.

As to the operation, a hernia is a condition in which part of an organ is displaced and protrudes through the wall of the cavity containing it (often involving the intestine at a weak point in the abdominal wall).  A double hernia is one on each side. Double hernias have to be treated surgically.  Heavy smoking is a contributing factor to the development of hernias.

I became a Robert Taylor fan at the age of 15 when his TV show, "The Detectives" premiered. My mother wanted to watch it because she remembered Mr. Taylor from the thirties. I took one look and that was it. I spent the rest of my high school career watching Robert Taylor movies on late night TV, buying photos of him, making scrapbooks and being a typical teenager. College, marriage and career intervened. I remember being sad when Mr. Taylor died. I mailed two huge scrapbooks to Ursula Thiess. I hope she got them. Time passed, retirement, moving to Florida. Then in 2012 my husband Fred pointed that there were two Robert Taylor movies that evening on Turner Classic Movies--"Ivanhoe" and "Quentin Durward." I watched both and it happened all over again. I started this blog both for fans and for people who didn't know about Robert Taylor. As the blog passes 200,000 views I'm delighted that so many people have come by and hope it will help preserve the legacy of this fine actor and equally good man.
View all posts by giraffe44 →
This entry was posted in Letters and tagged 1930s, 1950, acting, actor, Barbara Stanwyck, Biography, Bob Taylor, celebrities, Devil's Doorway, entertainment, gentleman, glamor, Golden Era, handsome, Henry Marco, hernia, hollywood, matinee idol, movie stars, Mr. Taylor, operation, Perfect Profile, Quo Vadis, recuperation, Robert Stack, Robert Taylor, Rome, San Francisco, separation, Stanford University Hospital, surgery. Bookmark the permalink.

2 Responses to Robert Taylor’s Letter to a Young Actor