A Letter from Robert Taylor 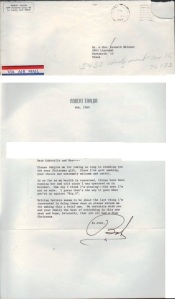 This is a letter written by Robert Taylor in February 1969.  It is part of a correspondence with Gabrielle Skinner, a fan who became a friend, and her husband Ken.  The correspondence went on for at least 17 years.

It is for sale on eBay, along with 2 other letters, for $300. I am not the seller and I have no financial interest in this.

In the first paragraph Mr. Taylor thanks Mr. and Mrs. Skinner for a Christmas present.  He doesn’t say what the gift is, only that it will be useful to him now that he has stopped smoking.

Robert Taylor then comments on his health, which is “running hot and cold.”  The last two lines are poignant. “One day I think I’m winning, the next I’m not as sure.  I guess that’s the way it goes when you’re up against the ‘Big C.'”  These are the words of a man who is putting up a gallant fight when he  knows he’ll probably lose.

In the last paragraph Mr. Taylor comments that he no longer feels like writing letters. He closes by wishing the Skinners “the best of everything.” I suspect that this was his last letter to them.

Ursula Thiess said of Robert Taylor’s battle against lung cancer “My husband is giving a performance–the greatest of his lifetime.”  (The Pittsburgh Press, Dec. 8, 1968.)  Mr. Taylor had never let his fans down, and he didn’t in his last role.

Complete text of the letter:

Please forgive me for taking so long in thanking you for your Christmas gift.  Since I’ve quit smoking, your choice was extremely welcome and useful.

In so far as my health is concerned, things have been running hot and cold since I was operated on in October.  One day I think I’m winning—the next I’m not so sure.  I guess that’s the way it goes when you’re up against the “Big C.”

Writing letters seems to be about the last thing I’m interested in doing these days so please excuse me for making this a brief one.  We certainly wish you and your family the best of everything in this new year and hope, belatedly, that you all had a fine Christmas.

I became a Robert Taylor fan at the age of 15 when his TV show, "The Detectives" premiered. My mother wanted to watch it because she remembered Mr. Taylor from the thirties. I took one look and that was it. I spent the rest of my high school career watching Robert Taylor movies on late night TV, buying photos of him, making scrapbooks and being a typical teenager. College, marriage and career intervened. I remember being sad when Mr. Taylor died. I mailed two huge scrapbooks to Ursula Thiess. I hope she got them. Time passed, retirement, moving to Florida. Then in 2012 my husband Fred pointed that there were two Robert Taylor movies that evening on Turner Classic Movies--"Ivanhoe" and "Quentin Durward." I watched both and it happened all over again. I started this blog both for fans and for people who didn't know about Robert Taylor. As the blog passes 200,000 views I'm delighted that so many people have come by and hope it will help preserve the legacy of this fine actor and equally good man.
View all posts by giraffe44 →
This entry was posted in Letters and tagged acting, actor, Big C, cancer, courage, fans, Gabrielle Skinner, gentleman, last role, letter, lung cancer, matinee idol, MGM, movie stars, Mr. Taylor, operation, Robert Taylor, role, Ursula Thiess. Bookmark the permalink.

9 Responses to A Letter from Robert Taylor