It’s been a tough week for Robert Taylor’s leading ladies: first Eleanor Parker then Audrey Totter died.  Now Joan Fontaine has passed away at the age of 96.

The following is adapted from a mini-bio Ms. Fontaine by Denny Jackson on the IMDb:

Joan de Beauvoir de Havilland was born on October 22, 1917, in Tokyo, Japan. Her father was a British patent attorney with a practice in Japan. Due to Joan and her sister Olivia de Havilland’s health problems, the family moved to California.  The De Havillands  divorced soon afterward.   Joan went back to Tokyo, where she attended the American School. In 1934 she came back to California, where Olivia was already working on the stage. Ms. Fontaine  tested at MGM as Joan Burfield (to avoid confusion with Olivia), but she was scarcely noticed and was idle for a year and a half.  In 1937, this time calling herself Joan Fontaine, she began to land better roles   In 1940 she was nominated for an Oscar for Rebecca (1940). Although she didn’t win, she was now an established star. She would win an Oscar for her role  in Suspicion (1941).  Ms. Fontaine was making one film a year but choosing her roles well. In 1942 she starred in the well-received This Above All (1942). The following year she appeared in The Constant Nymph (1943) for which she was again Oscar nominated. Ms. Fontaine took the year of 1949 off before coming back in 1950.  In 1952 she starred opposite Robert Taylor and Elizabeth Taylor in the highly successful Ivanhoe. Leaving the big screen for a while, she took parts in television and dinner theaters. She also starred in many  Broadway plays such as “Forty Carats” and “The Lion in Winter.’ Her last film appearance was The Witches (1966) and her last acting job was a TV movie, Good King Wenceslas (1994). Joan Fontaine was married four times and is survived by two daughters.  She is, without a doubt, a lasting movie icon.

In Ivanhoe, 1952, Ms. Fontaine was somewhat overshadowed by her more flamboyant co-star, Elizabeth Taylor.  Nonetheless, she gave a moving and believable performance as the Saxon Princess Rowena.  She and Robert Taylor were compatible as lovers separated by war and family enmity.  Joan Fontaine even got her man in the end, despite the exotic temptations of Ms. Taylor.  The film was hugely successful, one of the top ten grossing films of 1952 and winner of a Film Daily award.  Ivanhoe was nominated for six Academy
Awards, including best picture.

On the set; director Richard Thorpe on the right.

Joan Fontaine was a beautiful and talented actress, an Oscar winner and a credit to her profession. 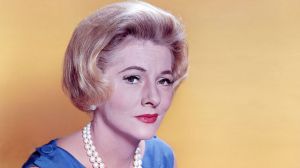 I became a Robert Taylor fan at the age of 15 when his TV show, "The Detectives" premiered. My mother wanted to watch it because she remembered Mr. Taylor from the thirties. I took one look and that was it. I spent the rest of my high school career watching Robert Taylor movies on late night TV, buying photos of him, making scrapbooks and being a typical teenager. College, marriage and career intervened. I remember being sad when Mr. Taylor died. I mailed two huge scrapbooks to Ursula Thiess. I hope she got them. Time passed, retirement, moving to Florida. Then in 2012 my husband Fred pointed that there were two Robert Taylor movies that evening on Turner Classic Movies--"Ivanhoe" and "Quentin Durward." I watched both and it happened all over again. I started this blog both for fans and for people who didn't know about Robert Taylor. As the blog passes 200,000 views I'm delighted that so many people have come by and hope it will help preserve the legacy of this fine actor and equally good man.
View all posts by giraffe44 →
Gallery | This entry was posted in Memorials and tagged acting, California, celebrities, death, drama, Elizabeth Taylor, entertainment, Fontaine, glamor, Golden Era, hollywood, Ivanhoe, Joan Burfield, Joan de Beauvoir de Havilland, Joan Fontaine, MGM, movie stars, Olivia de Havilland, oscars, Rebecca, Richard Thorpe, Robert Taylor, romance. Bookmark the permalink.