The Playgrounds of the Stars 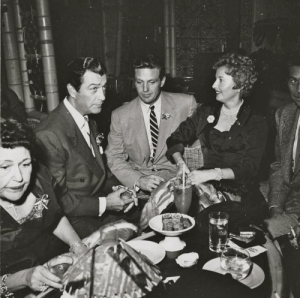 Part of being a movie star in the Golden Age was being seen, and photographed, at the glamor spots of Los Angeles, New York and even abroad. Barbara Stanwyck recalled later in life that the only time she had ever been social was when her husband, Robert Taylor, was required to appear in public three or four times a week. Early in his career Mr. Taylor was even sent by MGM to escort the wives of visiting dignitaries to various hot spots. There were a few restaurants and clubs that the A list stars favored and some of them appear below. After his marriage to Ursula Thiess, Mr. Taylor abandoned Hollywood night life except when absolutely necessary for professional reasons. He much preferred a backyard barbecue with close friends. 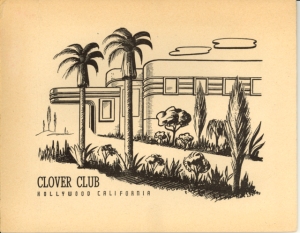 In the mid-1930s, the Sunset Strip was just developing. The Clover Club was one of the city’s first exclusive clubs. A nightlife scene for the rich and famous, it catered to celebrities by being one of the few places in town that turned photographers away. Together with pretty boy gangster Ben “Bugsy” Siegel, [gangster Mickey] Cohen would run The Clover Club and use it as a fortress on the Strip for operations ranging from prostitution to gambling. (“LA Whale Mickey Cohen Brought Crime to the Table,” Daniela Galarza, Jan. 2013, Eater.com.)

The first two photos are Stanwyck and Taylor touring the club; the rest are from an occasion with Jack Benny and Mary Livingstone, very close friends of the Taylors, in 1943 or 1944.

“The Stork Club was a pinnacle in the landscape of attainment, an embodiment of the deluxe, a place where the door swinging open and the effusive beckoning of the maître d’ told the favored, ‘You’re home.’

“Early in the war, opening a new front, [Sherman] Billingsley took space west of the club and broke through a wall of the bar to create the Cub Room, as [columnist Walter] Winchell named it for no specified reason.  It quickly became the most exclusive corner of the club. Billingsley later told some people he built it out of love for his flame Ethel Merman, so she would have a place to go after the theater, and others that he built it to get over Merman after they broke up and she got married.

“In the months to come there was other cheering news, courtesy of Stork Club Talk….. Lieutenant Robert Taylor had been spotted in the Cub Room “STAG!” Gary Cooper had dropped in, along with Lieutenant Commander Robert Montgomery, Beatrice Lillie, Shirley Temple, Dorothy Lamour (who years earlier had been fired as one of Billingsley’s first speakeasy entertainers), U.S. Attorney General Francis Biddle,

Paul W. Tibbets and Robert Taylor at the Stork Club, ca. 1950. Tibbets was the subject of the movie “Above and Beyond.”

[Robert Taylor, Barbara Stanwyck and Armand Deutsch] had supper in the Cub Room at the city’s posh Stork Club. The patrons were used to celebrities and, for the most part, did not approach the table. But the ogling at these two people was truly Major League. The Stork Club was a favorite hangout of mine. I was always well treated, but after that evening I received the same obsequious attention that I now commanded at my apartment. (Armand Deutsch, “Robert Taylor, House Guest” from Me and Bogie, 1991.)

Ciro’s (also known as Ciro’s Le Disc) was a nightclub in West Hollywood California  at 8433 Sunset Boulevard on the Sunset  Strip, opened in January 1940, by entrepreneur William Wilkerson.  Herman Hover took over management of Ciro’s in 1942 until it closed its doors in 1957. Hover filed for bankruptcy in 1959, and Ciro’s was sold at public auction for $350,000.

Ciro’s combined an overdone baroque interior and an unadorned exterior and became a famous hangout for movie people of the 1940s, 1950s and early 1960s. It was one of “the” places to be seen and guaranteed being written about in the gossip columns of Hedda Hopper and Louella Parsons..

First and second photos: Taylor and Stanwyck some years apart. Third:Singer Johnny Ray, who was headlining at the Stork Club, joins the Taylors. Fourth photo: Jack Benny with the Taylors.

The Hotel de Crillon in Paris is an historic luxury hotel opened in 1909 in a building dating to 1758. The hotel is located at the foot of the Champs-Elysees and is one of two identical stone palaces on the Place de la Concorde. The Crillon has 103 guest rooms and 44 suites. It also has three restaurants, a bar, outdoor terrace, gym and health club on the premises. (Wikipedia). This photo may have been taken in 1947 when the Taylors were on a European tour. The other man is named Robert Short.

We associated with each other in those days for fun—not just publicity. The Trocadero was the clubhouse—and on Sunday nights, some outstanding wit was master of ceremonies, introducing for the first time on the West Coast such people as Martha Raye or Joe E. Lewis. Owner Billy Wilkerson would wander around accepting compliments on the wonderful food, wonderful entertainment and wonderful service. And it was just that—wonderful!  (From The Golden Age, by Robert Taylor, Variety, 1/5/66)

I became a Robert Taylor fan at the age of 15 when his TV show, "The Detectives" premiered. My mother wanted to watch it because she remembered Mr. Taylor from the thirties. I took one look and that was it. I spent the rest of my high school career watching Robert Taylor movies on late night TV, buying photos of him, making scrapbooks and being a typical teenager. College, marriage and career intervened. I remember being sad when Mr. Taylor died. I mailed two huge scrapbooks to Ursula Thiess. I hope she got them. Time passed, retirement, moving to Florida. Then in 2012 my husband Fred pointed that there were two Robert Taylor movies that evening on Turner Classic Movies--"Ivanhoe" and "Quentin Durward." I watched both and it happened all over again. I started this blog both for fans and for people who didn't know about Robert Taylor. As the blog passes 200,000 views I'm delighted that so many people have come by and hope it will help preserve the legacy of this fine actor and equally good man.
View all posts by giraffe44 →
This entry was posted in Biography and tagged 1930s, acting, actor, Barbara Stanwyck, Bugsy Siegel, celebrities, Ciro's, Clover Club, Cotton Club, entertainment, Ethel Merman, evening clothes, gentleman, glamor, Golden Era, handsome, hollywood, Lieutenant Commander Robert Montgomery, Louella Parsons, matinee idol, MGM, Mickey Cohen, movie stars, Mr. Taylor, Paul Tibbets, Robert Stack, Robert Taylor, romance, Sherman Billingsley, Stork Club, The Clover Club, Trocadero, Ursula Thiess. Bookmark the permalink.

4 Responses to The Playgrounds of the Stars