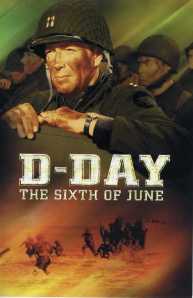 Viewers who want an all out action war movie with guns blazing and corpse strewn landscapes should avoid D-Day the Sixth of June. Released in 1956, the film looks back somewhat nostalgically at a war that was already beginning to fade into history. The world depicted seems remote as few people today have actually experienced total war. Today War World II has taken its place in history as the necessary war, the unquestioned war, unlike most of what has happened since—Vietnam, the Gulf War, Iraq and Afghanistan.

The movie explores large issues on a small scale. It follows a small number of individuals and how their lives were impacted by the war during the months preceding the Normandy invasion. There is an elderly British Brigadier who has been left behind by modern warfare, a car salesman from Minneapolis who wants to be a general, a publisher’s son-in-law invalided into a desk job, a British career soldier and a young woman from a sheltered background doing her part in the conflict.

The movie covers a number of themes including British American relations in the last year of the war, the dislocation of normal morality in wartime, the war-weariness of the British population as they hold out for yet another year of suffering. Behind all of it is the war, huge, bloodthirsty and seemingly endless. Everything is impacted—steaks are horse meat, cigarettes are a rarity, nights are pitch black with all light forbidden, sirens blare day and night.

The protagonists are Captain Brad Parker (Robert Taylor), an American who broke his leg on a parachute jump and has been relegated to desk work, Major John Wynter, a heroic British commando (actual war hero Richard Todd) and Valerie Russell (Dana Wynter), the young woman who comes to love them both. Supporting characters include Major Timmons, a volatile car salesman (Edmund O’Brien) and Brigadier Russell (John Williams), Valerie’s father, who is filled with bitterness over the end of his career.

Parker is a married man from New England who has been away from his wife for over three years. Wynter and Valerie Russell are friends but not quite lovers. When Wynter is posted to Africa, Parker and Russell remain in London and become friends and then lovers. She is torn between her feelings of friendship and obligation towards Wynter and her exciting new American lover.

Eventually both Parker and Wynter take part in the Normandy invasion. The last fifteen minutes or so of the movie concern the battle itself which seems tame by modern standards. The lives of both men are changed forever by the events of June 6, 1944. There is no happy ending for most of the characters, no neat solutions to the complications of human life against the background of imminent death.

On the set: Richard Todd, Dana Wynter and her dog, Robert Taylor.

There are overtones of Waterloo Bridge (1940) in D-Day the Sixth of June. A romance between two very different people against the backdrop of war is central in both films. Robert Taylor is the male lead in both, wearing his signature trench coat each time. Neither has a happy ending. But there is an innocence to the earlier film that has been replaced by a kind of exhaustion in the latter. Most of the main characters spend their time living in a phoney world of hedonism. A character at one point speculates about what they’ll all be doing after the war. “Going back to our husbands and wives,” another replies.

About to hit the beach.

D-Day the Sixth of June is well acted and has good production values. Henry Koster’s direction is crisp and tight. Robert Taylor and Dana Wynter are compatible and their clinches are convincing. Most of the time Taylor convinces us that he is younger than his actual years. He moves like a man more youthful than 45. Richard Todd is the good guy, loyal and self-sacrificing. Edmund O’Brien is outstanding as the volatile Col. Timmons. The supporting cast is first rate.  D-Day the Sixth of June is a thoughtful film, looking back at a crucial part of what was then recent history. Even at a distance of almost 60 years, the human dilemmas portrayed here are relevant and timely.

More images from D-Day the Sixth of June

I became a Robert Taylor fan at the age of 15 when his TV show, "The Detectives" premiered. My mother wanted to watch it because she remembered Mr. Taylor from the thirties. I took one look and that was it. I spent the rest of my high school career watching Robert Taylor movies on late night TV, buying photos of him, making scrapbooks and being a typical teenager. College, marriage and career intervened. I remember being sad when Mr. Taylor died. I mailed two huge scrapbooks to Ursula Thiess. I hope she got them. Time passed, retirement, moving to Florida. Then in 2012 my husband Fred pointed that there were two Robert Taylor movies that evening on Turner Classic Movies--"Ivanhoe" and "Quentin Durward." I watched both and it happened all over again. I started this blog both for fans and for people who didn't know about Robert Taylor. As the blog passes 200,000 views I'm delighted that so many people have come by and hope it will help preserve the legacy of this fine actor and equally good man.
View all posts by giraffe44 →
This entry was posted in Films and tagged acting, actor, adventure, army, bombing, Brigadier, Britain, D-Day, Dana Wynter, drama, Edmond O'Brien, entertainment, faihfulness, handsome, happy ending, hedonism, hollywood, John Wiliams, London, marriage, movie stars, Normandy invasion, parachute jump, Richard Todd, Robert Taylor, romance, soldiers, unmarried couple, World War II. Bookmark the permalink.