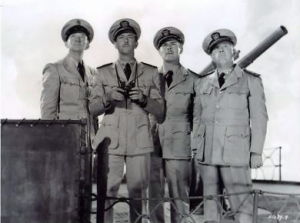 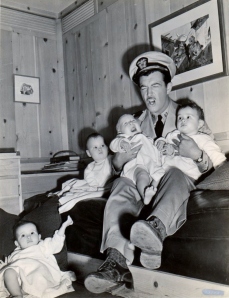 Aside from the obvious encouragement to enlist this film has a good story line and contains truth, compassion and heroism. Stand By For Action was based on the book Cargo of Innocents, hence the inclusion of the women and babies found in the lifeboat. This is one of my favorite roles for Charles Laughton who is quite believable as a crabby naval officer from the early 20th century. It is also a great role for Robert Taylor who portrays a character entirely lost to Americans of the last 50 years; that is an ivy-league, privileged rich young man forced to learn his experience from real working class men who, as Laughton’s character exclaims “Built the navy”. Walter Brennan appeals to the side of every man who comes to love a ship or car or job for its own sake. Brian Donlevy does an excellent job as the farm boy turned navy captain, and Chill Wills is good as ever as the guy everyone wishes would have been his “Chief”. Youngsters need to see this movie because it reflects well on an America known to their grandparents, and the rest of us should review it once in awhile so as not to forget what we once were. Added plus: a thrilling, realistic sea battle complete with “fog-of-war”. Review by Paul Arnold for the IMDB

I became a Robert Taylor fan at the age of 15 when his TV show, "The Detectives" premiered. My mother wanted to watch it because she remembered Mr. Taylor from the thirties. I took one look and that was it. I spent the rest of my high school career watching Robert Taylor movies on late night TV, buying photos of him, making scrapbooks and being a typical teenager. College, marriage and career intervened. I remember being sad when Mr. Taylor died. I mailed two huge scrapbooks to Ursula Thiess. I hope she got them. Time passed, retirement, moving to Florida. Then in 2012 my husband Fred pointed that there were two Robert Taylor movies that evening on Turner Classic Movies--"Ivanhoe" and "Quentin Durward." I watched both and it happened all over again. I started this blog both for fans and for people who didn't know about Robert Taylor. As the blog passes 200,000 views I'm delighted that so many people have come by and hope it will help preserve the legacy of this fine actor and equally good man.
View all posts by giraffe44 →
This entry was posted in Films and tagged acting, actor, babies, battleship, Brian Donlevy, castaways, Charles Laughton, Chill Wills, comedy, drama, entertainment, fog of war, glamor, Golden Era, handsome, hollywood, humor, Japanese, matinee idol, MGM, movie stars, Navy, navy captain, patriotism, paul arnold, Robert Taylor, Stand By for Action, TCM, Turner Classic Movies, walter brennan, war, World War II. Bookmark the permalink.